Trosifol: Aquarium of the Pacific in Long Beach, California 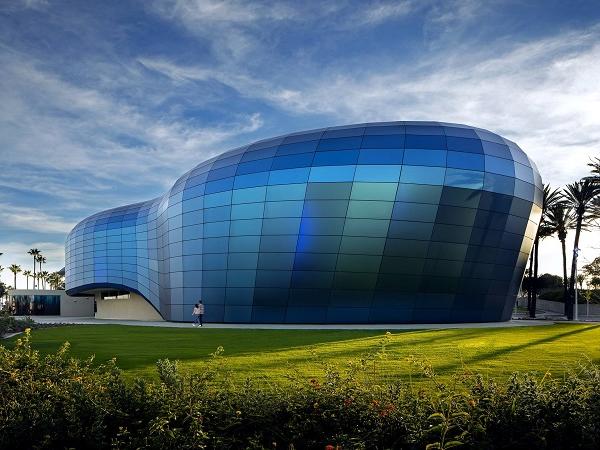 Opened to the public on the 24th May 2019, the new Pacific Visions wing of the Aquarium of the Pacific in Long Beach, California, exhibits a stunning multifaceted façade that looks almost whale like in appearance, thanks to the clever use of triple-laminated glass panels that have been fabricated using the SentryGlas® ionoplast interlayer from Trosifol™.

The 29,000 ft2 (2,694 m2 ), two-story sustainable structure − designed by San Francisco-based architecture and design firm EHDD − is fully enveloped by the 18,000 ft2 (1,672 m2 ) glass façade. Although only one shade of blue tint has been used throughout all the panels, the different angles and the way each panel catches the light, creates a fascinating abstract effect, with dramatic night-time lighting ensuring that this effect is also visible even after dark.

Katherine Miller, senior associate at EHDD explains: “The biomorphic form of the overall structure is meant to encourage different interpretations, referencing both microscopic and monumental sea creatures. The glass surface is meant to evoke the ocean. Early in the design process we established that the surface should have three characteristics: depth, variability, and luminosity. Because the structure is primarily a theatre, we could not allow any light to enter through the façade. Early on we considered opaque materials such as aluminium, stainless steel or FRP panels, but these surfaces did not have the liveliness we were after.”

The structure’s façade, which also doubles as a ventilated rain screen, is constructed of 839 non-reflective glass panels, each of which is uniquely sized and shaped to accommodate the sweeping curves of the building’s form. The individual panels are fabricated from 6 mm (0.23 in) acid etched, heat-strengthened glass + 1.52 mm (60 mil) SentryGlas® + blue tinted heat-strengthened glass + 1.52 mm SentryGlas® + 6 mm tempered and heat-soaked glass coated with a ceramic opacifier on surface 6.

Miller elaborates: “The innermost layer of glass incorporates a mirror coating to create luminosity and variability. The mirror coating subtly reflects the sky and the surrounding environment, resulting in slight colour shifts between the panels. Due to the colour variability, most people are surprised to learn that all of the glass is of identical make-up. The blue ocean colour was achieved with a blue body-tinted middle layer of glass. The outer layer is low iron-glass with acid-etch on the #1 surface to soften the reflectivity of the innermost glass layer. We used low-iron glass in lieu of conventional clear glass in order to not dilute the blue of the middle layer. The outermost low-iron glass layer was critical for creating a ¼ in separation between the blue colour and the acid-etch at the outer-most surface. In combination with the mirror coating, this creates depth.”

According to Trent Zinn, Project Manager at Woodbridge Glass, the glazing contractor: “Every single unique trapezoidal panel was fabricated directly from a 3D model. Not one piece was field measured. SentryGlas® was chosen by the design team for its strength and particularly for its edge performance, as all panel joints are open to the elements. I use SentryGlas® from Trosifol™ exclusively for structural glass projects due to the strength it offers, which greatly helps us during the calculation phase of the shop drawing review.”

Bernard Lax, founder and chief executive officer of Pulp Studio, the project’s laminator, refers to the fabrication process as an ‘exercise in frustration’, owing to the complexity in producing hundreds of unique glass panels with highly particular treatments.

“There were more than 800 of them and all of them are made up of three different pieces. There’s not one piece the same shape as another,” he explains. “We had to fabricate, store and match each of the panels, keeping them all separate and then catalogue all of them individually so they could be brought together for laminating. It was a logistical nightmare. We also had to set up specialised systems for how the glass was processed, polished and aligned. I like to think that the project team came to us because there are few people that would take on a job like this. Some companies run away from fire, we run towards it! We look for solutions to architectural challenges and jump in with both feet to solve them − many others would not be prepared to face these risks. We thrive on solutions.”

Miller concludes: “During design phases we consulted with Kuraray to confirm maximum sizes, edge stability and heat resistance. Heat resistance was important, because the glass is dark blue and opaque and in the hot summer sun it can become very hot within the glass assembly. SentryGlas® has become standard for us in all glass guardrail applications and we are starting to consider laminated safety glass as an alternative to tempered safety glass, in order to avoid roller-wave distortion and quench patterns.”

No amount of similes can do justice to the appearance of this building, it really is an amazing looking structure, which has once again proven the capabilities of SentryGlas® as a vital functional and aesthetic element of a demanding architectural application. From the tallest building, to the most eye-catching two-story artistic construction, the breadth and depth of the capabilities of SentryGlas® are constantly being redefined; and, with the introduction of SentryGlas® Xtra™, the application base is only ever going to get bigger. 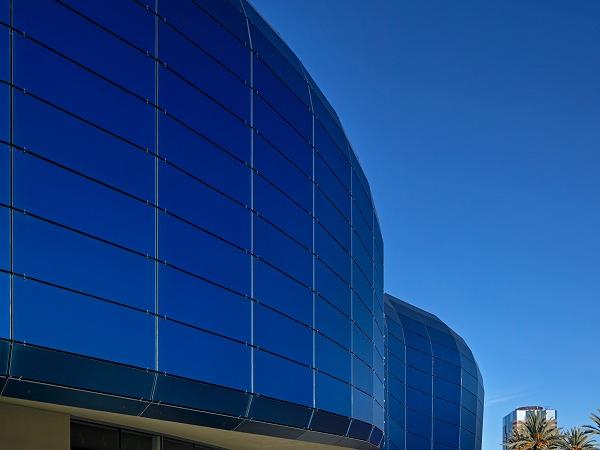 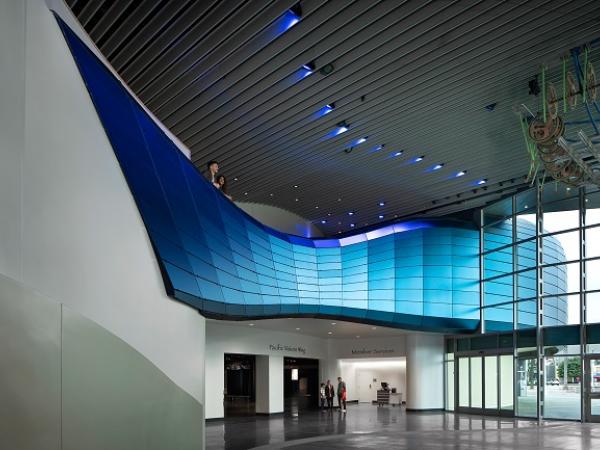 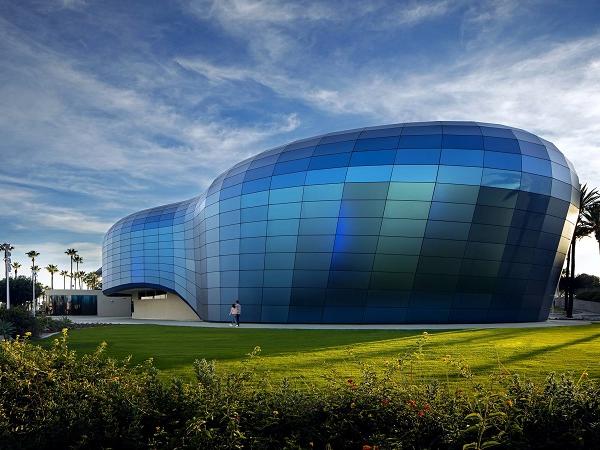 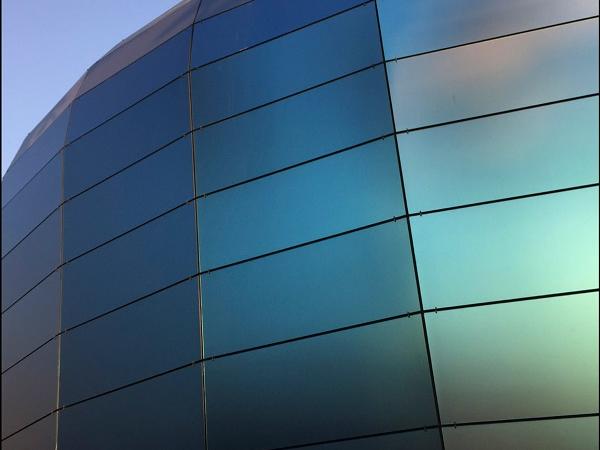 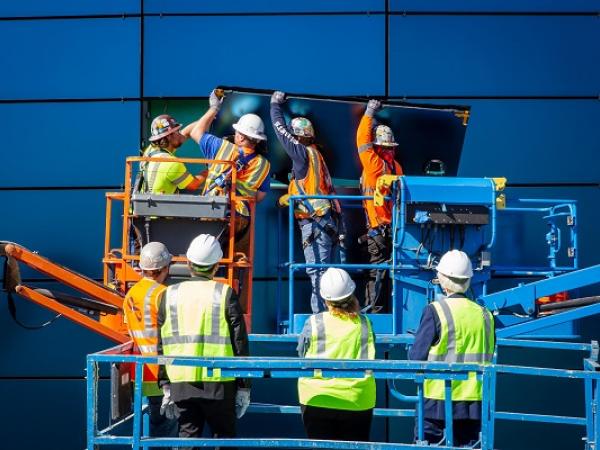 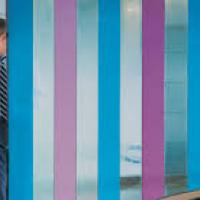