A rich tradition
With more than 30 years of experience in the co-extrusion of eco-friendly plastic materials such as PET, PLA, BIO-PET and other specialities, Folienwerk Wolfen drives the industry with sustainable plastic solutions. Originating from the ORWO film plant, the company has a rich tradition and specialised know-how. As one of the first processors of plastics, the properties of various polymers were combined in one film using multi-layer technology. Our core value is providing solutions that encourage the evolution of society by using technologies, products and services. We relentlessly strive to be a company that supports the society of the future, by utilizing our diversity to create value for society's needs.

Specialised know-how
Today we produce individual 'made in Germany' films which are efficient and reliable. We have a global presence pioneering high quality EVA film processing, and are independently tested, approved and certified to most major standards worldwide. Our specialised knowledge ensures we start with quality first. Using high value raw materials we designed an innovative product, which is not only tailored to the high demands of architectural glazing, but is also multifunctional, extensively tested and highly adaptable to varying conditions. Our focus on quality, research and service ensures we deliver to your needs.

Future adaptive innovation
Innovation is the result of a process that brings together various novel ideas in such a way that they affect society. Why should there be limitations to artistic creativity within design and architecture? With evguard® we can offer you a product to realize the most innovative ideas.
Our in-house research & development, and GUARD hallmark, ensures we produce, test and deliver sustainable quality now and continue to adapt to the future at the forefront of glass film innovation - giving you a high quality product that saves you money in the long run via being durable, flexible & future-proof. We offer tailor-made sizes for your individual needs with various graduations and colors - evguard® laminating film in thickness (0.2mm to 1.14mm), width (800mm to 2400mm) and evguard® MPE thickness (0.2mm to 0.6mm), width (1000mm to 1250mm) - in order to decrease waste ratio and overall cost.

A masterpiece of ongoing research and development
evguard® laminating film is an ethylene-vinyl-acetate (EVA) based thermoset interlayer for the manufacturing of laminated safety glass. Through processing, it forms a highly cross-linked three-dimensional composite interlayer that provides the strength for laminated safety, security and architectural glass.

evguard® laminating film is purposefully designed (and fully certified) for numerous glass building facades and extreme heavy impact applications worldwide, including external facades, overhead glazing and balustrades. It has passed all stringent standards to ensure long term stability and durability in these areas.

Quality - so much more in just one film
evguard® laminating film is produced from the highest quality ingredients enabling us to in-house manufacture a multipurpose, multifunctional film which offers impact, weathering, high sound reduction, high shear strength, resistance to wide temperature range, a very well designed melting viscosity (for use in premium, sensitive inserts such as stone lamination, LCD, etc.) with high-processability in both vacuum & autoclave, plus more. With the product - DESIGNED, DEVELOPED and MADE in Germany - and with the use of European raw materials, we deliver reliable and consistent quality.  Quality is the basis of everything we do. From the way we design, manufacture and test our products, to the services, and people who provide them.

Consistency – quality maintained throughout
We deliver a consistent, durable film that can last. evguard® laminating film enjoys same strict quality procedures, ensuring the same quality and cleanliness, distributed by our highly knowledgeable European suppliers. We provide full traceability for every single roll back to particular raw material via our ERP System.

Certification – fully certified worldwide
We have certification for all climatic conditions worldwide, including DIBt, impact, weathering, sound reduction, salt water, hurricane testing & balustrade testing, as well as for the highest hygiene standards (due to our experience manufacturing products for the medical, pharmaceutical, automotive and food applications).

Strong, efficient global network of distributors to make it easy.
Our mission is to continue to innovate and deliver quality, safe, flexible, energy efficient, future proof, and interesting glass.
Our large network of distributors make it possible for us to bring this quality to you, providing expert technical support to customers worldwide.
We are on the same mission in making world class glass that inspires and guards you. 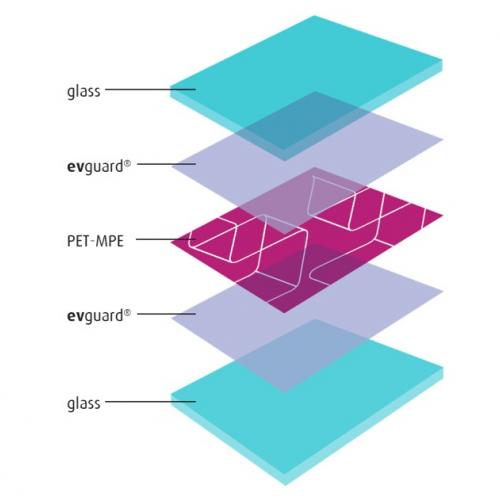 With its outstanding properties and performances, amongst only few others, evguard® is a high-end, premium quality laminating film for the glass industry – fully certified worldwide.

It has been tested to to the toughest conditions, far beyond the standard certification.

evguard® passes DIN EN ISO 12543-4 for behaviour at high temperature (Bake Test/ IFT Rosenheim). To investigate the behaviour of glass laminates at temperatures beyond the international standard test DIN EN ISO 12543-4, further tests were carried out. To prove the behaviour of laminated glasses with evguard® laminating film, laminated glass samples were exposed stepwise up to a temperature of 240°C. The glass laminates passed the test up to at least 200°C without any delamination effects or visual changes. Also at a temperature of 240°C, no delamination was detected, only a slight yellowing was observed.

In accordance with the norm DIN EN ISO 12543-4, the artificial aging by UV irradiation was carried out by means of a xenon-arc solar simulation spectrum with a power of 50 W / m² in total UV wavelength. The examined samples have been continuously irradiated for 3,000 hours. In this case, a control    measurement of the haze values and the light transmission was carried out for every 500 h. The artificial aging by UV radiation was carried out by Friedmann & Kirchner testing institute (Germany) on laminated glass samples made from a series of different laminates. Both the LSG made with evguard® laminating film and evguard® laminating film + evguard® MPE passed the test successfully. No visual change of the quality of the laminate was observed.

evguard® passes continuous salt spray for 3,000 hours in a salt spray test according to ASTM B117/ISO 9227.

In the test chamber of the salt spray cabinet, which is heated to 35 ± 1°C, a solution of 5 ± 1 percent by mass of sodium chloride with a pH 6.5 – 7.2 is atomized continuously. As a result of spraying this solution, the relative humidity in the test cabinet is more than 95 %. In time, all panels show more or less iridizing colors due to the aggressive attack of salt spray on the top coating on the glass. None of the samples show delamination.

evguard® laminating film provides low deflection and high shear modulus. Thus, for architectural calculations, overall laminate thicknesses can be reduced significantly resulting in savings. evguard® laminating film offers safety properties in a broad temperature range, not only at room temperature but also at temperatures above 50 °C. These properties bring new possibilities in open edge applications since there is no need for frames anymore.

evguard® laminating film is less sensitive to moisture compared to other interlayer films like ionomers or PVB. This offers a great advantage in resistance of the laminate against weathering conditions and durability of the final product. evguard® laminating film is suitable for open edge applications and does not require a strict moisture control during transportation, storage and use. (DIN EN ISO 62)

Because the glass layers form a solid composite once they are laminated with evguard® laminating film, and evguard® nonetheless remains highly elastic, this type of laminated glass is ideally suited for use as protection from break-ins or falls, or even for much stronger loads by adding our evguard® MPE - Special high performance multi-layer polyester insert for heavy impact and printed laminated safety glass applications. With the 55.4.MPE(800) construction it passes Florida Building code TAS 201-94 (Large Missile) and TAS 203-94@ ±120 psf (Cycling). 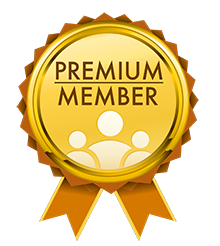