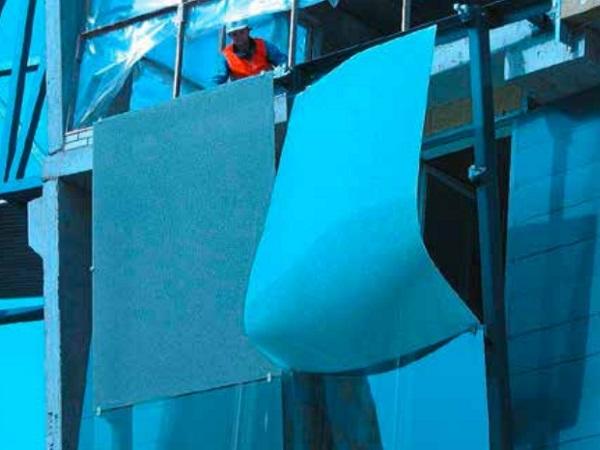 Post breakage strength of glass is still an unknown area as analytical models for this are inconclusive so far and thus destructive testing is the only reliable solution.

Design and structural performance of laminated glass in over-head glazing applications like canopies, skylights is very critical as it has an impact on the safety of occupants of a building and its maintenance workers. For such applications post breakage strength of laminated glass construction is of utmost importance. Pre breakage strength can be predicted with reasonable accuracy by FEM technique based software packages like SJ Mepla, which allow the user to input mechanical properties of viscoelastic interlayers along with glass. This helps in interlayer based differentiation of pre breakage structural strength and design optimization.

However, post breakage strength of glass is still an unknown area as analytical models for this are inconclusive so far and thus destructive testing is the only reliable solution. Impact testing, simulating the accidental fall of a maintenance worker was done to assess the “fall through” resistance of point fixed laminated glass constructions having varying interlayers viz, PVB, Ionomer, Stiff PVB, and EVA. In addition, medium duration (30 mins or more) post breakage strength tests driven by the new requirements set in place by German Standard pr DIN 18008-6 were conducted at subzero (-20 °C), room temperature (21 °C) and at elevated temperatures of 50 °C. Deflection measurements were also made to estimate the modulus value of the broken laminate construction.

Laminated glass has a significant improvement in the post breakage strength over a monolithic layer of glass, the glass fragments adhere to the interlayers so that a certain remaining structural capacity is obtained as the glass fragments ‘arch’ or lock in place. This capacity depends on the fragmentation of the glass and increases with increasing fragment size. Therefore, laminated glass elements achieve a particularly high remaining structural capacity when made from annealed or heat strengthened glass that breaks into large fragments. The post breakage behavior furthermore depends on the interlayer material. The most common interlayer is PVB whose mechanical properties are heavily depended on temperature and load duration.

At room temperature, PVB is soft with an elongation at break of more than 250%. For higher temperatures and load durations the shear transfer is greatly affected1. Low stiffness of the PVB interlayer results in “Blanket Effect” (Fig. 1) as soon as the glass breaks even for vertical applications because of the self-weight of the panel especially with large panel sizes and minimal supports. Ionomer interlayers from Kuraray (originally invented by DuPont), was developed with the aim of achieving higher stiffness, temperature resistance, resistance to tearing in point fixed rotule applications. This helps in achieving a superior post breakage strength and design redundancy.

Above table gives a comparison of the mechanical properties of Ionomer, PVB, Stiff PVB interlayers.

Separate tests were conducted for both above types of strengths and same have been presented in this paper.

Impact tests were done at Intertek ATI Inc. York, Pennsylvania by dropping a soft bag weighing 100 Kgs (typical weight of maintenance working along his tools and tackles) from a height of 1.2 mts at a test temperature of 50 ºC. The test method simulates potential loading from installation and/or maintenance workers in distress. The panels were conditioned at 50 °C for 1 hour before the test. The test set up was enclosed with insulated panels to ensure there is no variation in test results due to temperature. The insulated panels were removed just before the impact.

Fig. 2a shows how the laminate made from Ionomer interlayer provided a barrier against the impactor under static load. The impactor was removed after 15 minutes without any tearing of interlayer observed at the rotules (Fig. 2b). In the subsequent impact test, this laminate provides “Fall Through” restistance (Fig. 3), whilst laminates made from EVA, PVB and Stiff PVB in Fig. 4, 5, 6 respectively, collapsed as soon as the impactor struck, and failed to act as a barrier.

German Standard pr DIN 18008–6, (Glass in Buildings – Design & Construction Rules – Additional requirements for walk-on glazings in case of maintenance procedures) in February 2015, has made the post breakage performance requirements for an overhead glazing, that is accessible for maintenance and cleaning, much more stringent than ever before. The new regulation requires a laminated glass construction to sustain the weight of 100 Kg for at least 30 minutes after breakage of top layer of glass. First, the panel is subjected to an impact made by dropping a twin tyre impactor which weighs 50 Kg from a height of 900 mm.

This is followed by imposing a load of 100 Kg for 30 minutes on an area of 200 x 200 mm (Fig. 7). After breakage of the uppermost glass layer, the whole glazing element must stay on its supports for at least 30 minutes. The test is successful if the specimen does not slide from the supports, the impact does not penetrate the laminated glass and no dangerous glass fragments fall down2 .

Post breakage strength tests on point supported glass panels (1.5 m x 2.0 m) for a typical canopy application were conducted at University of Armed Forces in Munich, Germany. 9 glass panels with each of 4 different interlayers – Ionomer (1.52 & 0.89 mm), Stiff PVB (1.52 mm), and PVB (1.52 mm) were prepared for testing at 3 different temperature scenarios. The objective was to know which interlayer type laminate construction can pass the requirements set by pr DIN 18008-6 at 3 different temperatures (-20 °C, +21 °C and +50 °C). 3 panels were tested for each temperature scenario. An attempt was made to know the ultimate capacity of the laminates.

However, the test apparatus had a limitation of applying a maximum load of 400 Kg. The laminates were conditioned for at least 3 hours for each temperature scenario. The test chamber had a temperature control mechanism for -25 °C to +25 °C. The laminate construction with all different types of interlayers was strong enough to withstand the impact against any breakage. Therefore the upper layer of laminates in each case had to be broken manually with a centre punch. It was followed by placing a 100 Kg concrete block on the glass panel for 30 minutes. The test was aimed to know the ultimate post breakage performance limit so load was ramped up to 400 Kg in increments of 100 Kg, with a 15 minute time interval between each load increment.

Laminates with Ionomer and Stiff PVB interlayers sustained this load of 400 Kg without collapse at -20 °C and + 21 °C temperatures (Fig. 8), whereas in Fig. 9, PVB laminate could not sustain the 100 Kg imposed load at 21 °C as it collapsed in few seconds when load was placed due to tearing of the interlayer at rotules.

At elevated temperature of 50 °C, broken laminate construction with PVB & Stiff PVB interlayers could not sustain their own self weight as they collapsed (Fig. 10 & Fig. 11) soon after breakage of both layers.

Deflection measurements were made during the test for all three temperature scenarios to make a reverse estimate of the modulus value of the laminate construction. At –20 °C the 1.52 mm Ionomer laminate demonstrated the lowest deflection after 30 min (Fig. 14), whilst at +21° C the ionomer laminates as well as the laminate with a stiff PVB interlayer outperformed the standard PVB laminate (Fig. 15). At +50°C laminates with SentryGlas® ionoplast interlayer outperformed the stiff PVB. (Fig. 16.)

Performance of cable-supported glass façades under time-depending wind action
This paper discusses the structural response of cable-supported glass façades, through time history finite element (FE) analyses, under different wind action combinations.
Differentiation in Architecture by Professional Designs and New Materials
The economy globalizes. The industries concentrate. The productions become uniform. Cultural specificities disappear. About architecture and glass in architecture, it is the same phenomenon.
Ahead of the Curve: Innovative Cold Bent & Insulated Glass Entry Wall
“Going ahead of the Curve” is what the advertisement states outside of newly remodeled, Class A office building at 160 Elgin Street in Ottawa, Canada.
Investigations on Linear Silicone Joints for Glass-Metal Elements with Composite Structural Behavior
In this article, experimental and numerical results obtained for linear structural silicone joints between glass and stainless steel substrates, investigated separately under tensile and under shear loading, are discussed.
#AskGlaston Flat Tempering Series Episode 2: Stress calculation
In the second episode of #AskGlaston Flat Tempering Series, we will talk about the new solution to estimate the stress level in glass – online.
Edge-laminated Transparent Structural Silicone Adhesive (TSSA) Steel-to -Glass Connections
This work focuses on the Transparent Structural Silicone Adhesive (TSSA), produced by Dow Corning.