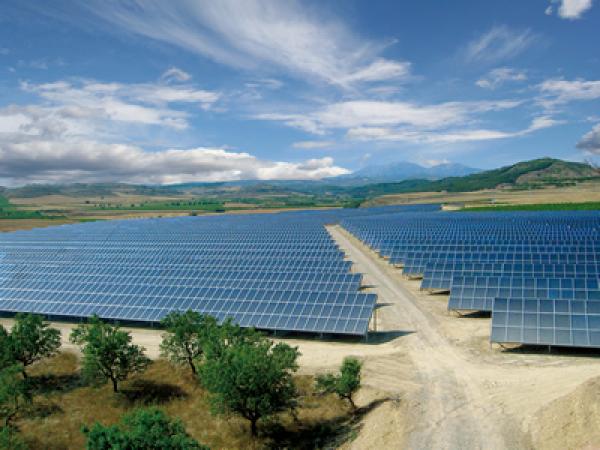 Reliable and long-term protection of solar cells from external influences is a must for solar modules. This is where transparent plastic encapsulation materials make a crucial contribution to the durability of photovoltaic modules and to the long-term generation of electricity from sunlight.

This article explains in broad terms which plastics are suitable and why. Special attention is focused on polyvinyl butyral (PVB), a plastic best-known so far for its use as the interlayer in laminated safety glass. The first manufacturer worldwide to develop a special PVB film for use in solar modules – the TROSIFOL brand – was Kuraray Europe GmbH.

Solar modules using TROSIFOL PVB films have been successfully undergoing outdoor weathering tests on the module test rigs of the Berlin Photovoltaic Institute and the Fraunhofer ISE Institute in Freiburg since the beginning of the Eighties.

Kuraray is currently working on the market launch of a second generation of films which is designed for all conventional photovoltaic module production processes and will extend the uses of the current range of films to include special applications.

EVA as a cell encapsulation material

Ethylene-vinyl acetate (EVA) is still the market leader and standard encapsulation material for solar cells. EVA’s widespread use is explained by its processing properties as a cross-linking rubber-elastic material in vacuum laminators and its adapted technical product features.

For a long time there have been no alternatives on the horizon, as finished modules produced since the Nineties have a service life of at least 20 years and all series products have to be certified. It is therefore difficult for other plastics to gain a foothold on the market if the points in their favour are rarely measurable.

- Mechanical protection of the cell

- Barrier to oxygen and water vapour

There are few plastics that display all of these properties reliably in practice. Classical solar modules using crystalline Si wafers were joined almost a decade ago by thin-film PV modules on which the semiconductor is applied directly to (rigid) substrates – preferably glass in this case – and then mostly sealed at the rear with another ply of glass or alternatively with a multiple-ply barrier plastic (see Figures 2 and 3).

Because of the way the cell is applied to the glass (high-vacuum deposition at temperatures up to 630°C), few materials are suitable as substrates for thin-film modules, although flexible substrates made of copper or stainless steel are possible as well as glass.

Table 1 gives an overview of the encapsulation products industrially used today. A distinction is made between elastomer cross-linking and thermoplastic materials.

The elastomer cross-linking products include the most frequently used EVA, TPU and acrylate encapsulation resins, and two-component silicones that cross-link on exposure to heat and/or UV light to form a rubber-elastic material and thus firmly embed the solar cell.

These contrast with thermoplastic products that melt without cross-linking on exposure to heat, thus retaining their original chemical composition. These include above all polyvinyl butyral, the most important encapsulation alternative, particularly for thin-film solar modules. All the other products such as thermoplastic polyurethane (TPU), ionoplastics, modified polyolefins and the above-mentioned elastomers are currently of only secondary importance.

The plastic polyvinyl butyral (PVB) has been in use as the interlayer for laminated safety glass since the Forties of the last century. Its main applications are in windscreens in vehicles and safety glazing in architectural applications, e.g. modern glass façades.

Since 2005, efforts have been afoot in the PV module industry and the glass industry to replace existing encapsulants with PVB film in double-glazing elements with integrated solar cells in order to significantly enhance the standard of safety of laminated module glass in Building-Integrated Photovoltaics (BIPV).

Furthermore, thin-film solar modules consisting of two plies of glass sandwiching a PVB interlayer can be inexpensively manufactured with the lamination process successfully used for the production of laminated safety glass.

In view of the already evident and fast-growing demand for thin-film solar modules – forecasts anticipate 40 per cent of total module output by 2020 – the use of PVB film will continue to grow accordingly with a considerable expansion of its market share.

TPU, silicones and other encapsulation materials

The reasons for the low market shares of other plastics are lack of experience with the products of the solar industry, their in some cases inadequate technical properties and their excessively high cost. It is also essential that such products perform impeccably in the solar module for 20-25 years, which is only possible if they comply with the relevant electrical standards (electrical function tests conforming to IEC).

As a result of pressure from manufacturers on the system costs of modules, more expensive products such as TPU and ionoplastics usually drop out of the running. New plastics have to overcome high technical and commercial barriers if they are to gain recognition and pull through as encapsulation materials for solar cells.

Processes for the encapsulation of solar cells

The single-opening vacuum laminator has been the preferred production method for the encapsulation of solar cells for several decades now. For cross-linking plastics, it permits rapid throughput and high production efficiency. For other products, such as thermoplastics, the process has to be adapted, the higher melting temperatures of thermoplastics may result in a slightly longer lamination process.

This process technology is also of benefit to thermoplastic encapsulation materials such as PVB film and others, as the much accelerated throughput lowers costs substantially.

At the same time, thin-film solar modules can also be produced in a single cycle in a roll laminator with subsequent autoclaving. This method has been successfully employed for decades for the production of laminated safety glass with PVB films and is at least as efficient as the vacuum laminator (Table 2).

Module applications and their effect on materials

Solar modules are usually preferably installed either on roofs or on open ground as photovoltaic power plants. These two forms of installation account for the lion’s share of commercially installed solar modules. In addition, there is also the possibility of integrating solar cells in buildings (BIPV) – for instance, on facades or in solar glass roof elements. Even if the market for this is still small today, a big future has been forecasted for BIPV.

In Europe in particular, building-integrated photovoltaic installations are subject to the same high safety standards as all other glazing on façades or in overhead applications. In Germany, in the official technical specifications for building materials, laminated safety glass with an interlayer of PVB film is stipulated for overhead glazing. If these elements are replaced with solar modules, the same standards apply.

This means that EVA and other plastics in PV modules in such applications can only be used after an elaborate process to obtain permission. For Building-Integrated Photovoltaics, experts are forecasting a sharp rise in commercial applications in the next ten years.

Until just a few years ago, photovoltaics was confined to classical applications such as systems installed on roofs and power plant configurations, and preference was given to modules containing crystalline cells. EVA was the No. 1 choice as the encapsulation material.

Recent years have seen the extension of the range of cells and modules to include thin-film alternatives, new and improved processes for the production of modules, and new applications such as Building-Integrated Photovoltaics. Encapsulation materials for solar cells will adapt to these new conditions. A very important alternative is TROSIFOL SOLAR PVB.

Glastory: Could every glass surface be a power source?
I want you to think about your daily journey to work. Take a minute, visualize it – and then answer me this: How many glass surfaces did you see? Too many to remember?
The TVT Glass Pavilion
Theoretical Study on a Highly Transparent Building Made with Long-Spanned TVT Portals Braced with Hybrid Glass-Steel Panels
Serrated Glass Facades: the Influence of Façade Morphology on Aesthetic Quality
Serrated building envelopes are a very eye-catching element of contemporary architecture. This type of façade in plan resembles the edges of a serrated blade, hence the name.
The Aesthetics of Color in Architecture Glass Facades
Research deals with the effect of using color in aesthetic taste of architectural interfaces as one of the most important problems affecting the architectural form.
Probabilistic Study of Wind-temperature Interaction
An Initial Study Towards Optimized Structural Assessment of Glass Components
Glass Constructions Under Extreme Boundary Conditions
Constructions at exceptional locations are often challenging but worth one’s while. Extreme boundary conditions and sophisticated demands of the client have to be considered.