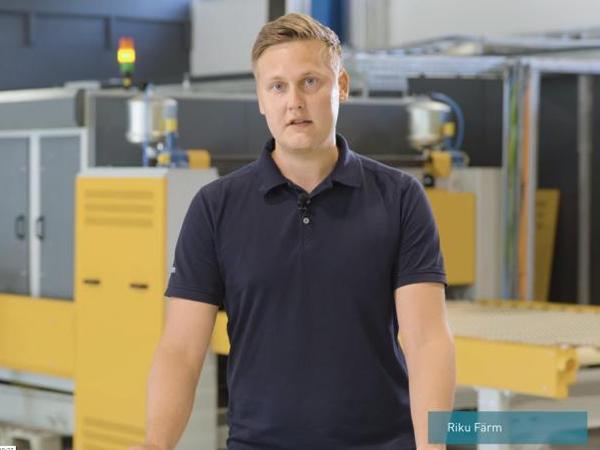 That’s an excellent question! It really is true that SentryGlass is more difficult to laminate in many aspects than standard PVB. But if we first think of what SentryGlass has been designed for, it is to give structural strength to the laminate.

This week, we’re dealing with the following question:

Why is SentryGlass more difficult to laminate than normal PVB?

That’s an excellent question! It really is true that SentryGlass is more difficult to laminate in many aspects than standard PVB. But if we first think of what SentryGlass has been designed for, it is to give structural strength to the laminate.

The difference between SentryGlass and standard PVB can be instantly seen – even when you’re comparing a piece of SentryGlass and a piece of PVB at room temperature. SentryGlass is a much stiffer material and also a much slippery material than PVB. And this can cause certain issues throughout the process that you need to consider when producing SentryGlass laminates. So let’s look into them starting from the assembly room and moving to the heating, pre-pressing and autoclaving.

First, let’s look into the assembly room and what kind of challenges SentryGlass brings there to the table. First of all, since SentryGlass is more slippery than normal PVB, to which people are mostly used to, it is more common to see the top glass sliding on the foil than you would see with PVB. It means that it is really important to pay attention to having the glasses completely aligned and not to move the glass, for example, during the trimming process. Otherwise, it is quite typical to cause misalignment by slightly moving the top glass or pulling the edge of the SentryGlass interlayer during the trimming.

The second thing is that the trimming with SentryGlass is a bit more difficult than with PVB. It is harder to make a straight cut through the material, and if you are trying to do that, it can cause an issue. That is why with SentryGlass, you can just make a pre-cut, and then it is easier to tear off the remaining material away.

These were the main things to take into account in the assembly room. The second part is the heating process.

While SentryGlass is much stiffer in the room temperature than PVB, when you start heating it, it actually does get very soft very quickly. And even quicker than PVB does. This means that, compared to PVB, it is much easier to get the adhesion between SentryGlass and the glass layer itself. This leads to a situation of having trapped air in the trailing edge of the glass. The reason for this is that the trailing edge might have been overheated a bit and has closed before you were able to do de-airing. This, in turn, means that the operating window with SentryGlass is much narrower than with PVB. So, it is very important to keep in mind that it is possible to run SentryGlass with the same settings as PVB, but it might not be possible in certain areas of the PVB’s operating range, where higher temperatures still might be giving you the acceptable quality.

The third part is the autoclave. This is what often causes issues for the companies that already have an autoclave and have been used to laminate PVB.

Let’s consider as an example an autoclave with a capacity of 10 tons of glass per loading.

It is quite easy to imagine that you can just load the SentryGlass laminates to the autoclave and have the same capacity as you have with PVB, but often that’s not the case. The reason is that SentryGlass requires much more heating and cooling capability during the glass processing cycle. So, if you are trying to process SentryGlass with the same recipes and want to have the same amount of production as you have with PVB, way too often it not going to work. When using SentryGlass, a good rule of thumb is that you can normally utilize about only 25% of the autoclave capacity if you have the autoclave that has been tailored for PVB production. It is also important to take this into account when you are planning to purchase a new autoclave, so you could have it equipped with more heating or cooling capability to achieve a decent capacity also with SentryGlass.

These three processing steps are the main things that make SentryGlass lamination a bit more difficult than with PVB. And this is something you need to take into account in your production.

It is also good to keep in mind that interlayers do evolve all the time. Therefore, it is good to discuss with the interlayer manufacturers what kind of recommendations they have. For example, SentryGlas® Xtra™, which has been out for a while, should be much easier to process from the autoclave perspective that standard SentryGlass.

Design of a Curved Duplex Façade for a 67 m High Residential Tower at the Belgian Coast
The main challenge in the design of the duplex façade was the high aesthetical performance that the façade had to meet.
Application of an iron-based shape memory alloy for post-tensioning glass elements
This work discusses the results from first feasibility investigations dealing with the choice of adhesive and identifying a suitable activation procedure for Fe-SMA strips adhesively bonded to glass elements.
Extreme Cold-Bending: Geometric Considerations and Shape Prediction with Machine Learning
This paper presents work undergone for a set of four high-rise towers, featuring 11,136 unique cold-bentpanels, hundreds of which are pushed beyond 250mm.
Design Base for a Frameless Glass Structure Using Structural PVB Interlayers and Stainless-Steel Fittings
The paper undertakes a review of basic interlayer stack data with regards to viscoelastic properties and adhesion, and the engineering hypotheses using recent preliminary fitting test results for various loading schemes.
Investigations on the execution and evaluation of the Pummel test for polyvinyl butyral based interlayers
This paper shows different Pummel classifications that can currently be found on the market. Subsequently, approaches to the automatization and standardization of the execution and especially the evaluation of the Pummel test are shown.
Slim Skins: Towards a New Glazed Façade System
This paper sheds some light on the challenges to build with high performing glazing façade systems (originally called curtain wall systems) while efficiently utilising resources and reducing its manufacturing embodied carbon.