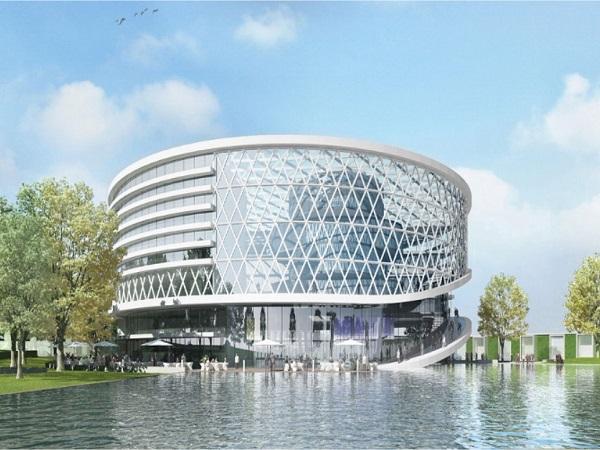 Experience has only value when shared.

Refrigerated PVB is stored and transported between 2 and 10 degrees C.

Blocking means tendency not to be able to unwind without excessive forces.

PVB does not have a shelf life, in a sense that there is no chemical or physical change of the material over time. But a ‘best use before” time is recommended, purely related to potential roll blocking.

Another way to avoid blocked rolls is to interleave the PVB rolls with embossed Polyethylene film. This also allows to transport and store without needing cooling capacity. (no refrigerated warehouse needed).

But we still advise to have the roll (in the original moisture proof bag, 24 hours before using) stored at ambient temperature of 20° C. When stored at high ambient temperatures, there is a risk of surface pattern collapse, due to rheology/stiffness’ changes in the PVB. PVB surface roughness comes back in a limited way (elastic memory) when no pressure or weight is exercised on the PVB film. (cut blank stored).

Since PVB is hygroscopic, PVB rolls are packed in moisture proof bags (in most cases: “OPA bags” (Aluminum film as moister barrier/PE to protect it from oxidizing (and contaminating the PVB film/roll) and “Oriented Poly Amide” on the outside (to make the composite more tear resistant.)

The PVB film is wound on ABS, PolyEthylene or PolyPropylene cores, with an inner diameter of 152 mm (6 inches).

The rolls are shipped/stored in returnable metal crates or crates in wood and cardboard.

Most of the packaging material is taken back, except PE interleaving film and OPA Moisture proof bags/film. These should be recycled locally (European Union’s effort to reduce/limit “waste tourism”).

Somewhat different from automotive lamination (where blanks are cut and then stored for some 24 hours before using), the PVB film is unwound and laid directly on the glass and then a second glass is put on top.

This does not allow much time for the PVB film to show shrinkage or moisture pick up.

So, the dimensional stability of the PVB film, when unwound from the roll is rather critical.

The PVB temperature can have a significant effect on dimensional stability. When in contact with the glass, the elastic memory of the PVB might exert shrinkage forces if different in temperature.

On the other hand, the surface roughness will hold better/longer (especially during the cold vacuum section of the process) if the PVB film is cold.

For manual unwinding, a PVB temperature between 7 and 15 °C is advised.

For automatic unwinding, a PVB temperature of 15 °C is preferable.

If the PVB film/roll is too long time at a temperature above 10 °C, the material starts to stick to itself and roll blocking can be the consequence.

When higher pulling forces are needed to unwind the roll, excessive PVB shrinkage can be caused.

Excessive pulling forces (from manual or automatic unwinding) should be minimized. 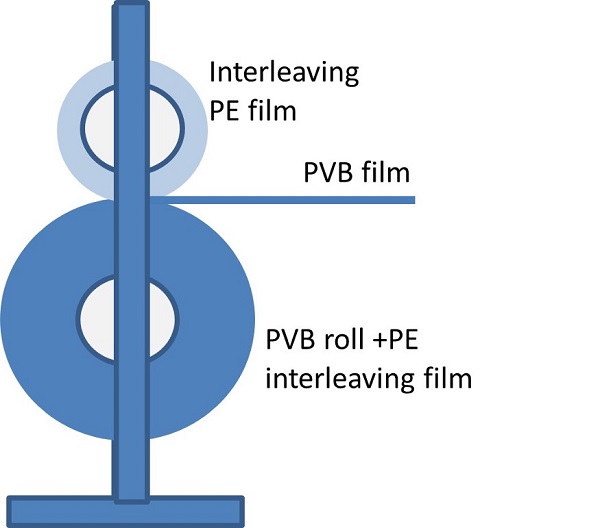 The simplest system to wind the PE interleaving film is to have a core with shaft through it, laying on top of the interleaved PVB roll (axe on the same support (see drawing), so when the PVB roll unwinds, the PE film is wound on the core on top.

Interleaved PVB can be stored at higher temperatures, but we would advise to bring the roll (24 hours before using) in a temperature-controlled room (less than 25 C).

PVB is a “co-polymer”, obtained through a condensation reaction, consisting of 3 different “units” alternating within the “co-polymer”. 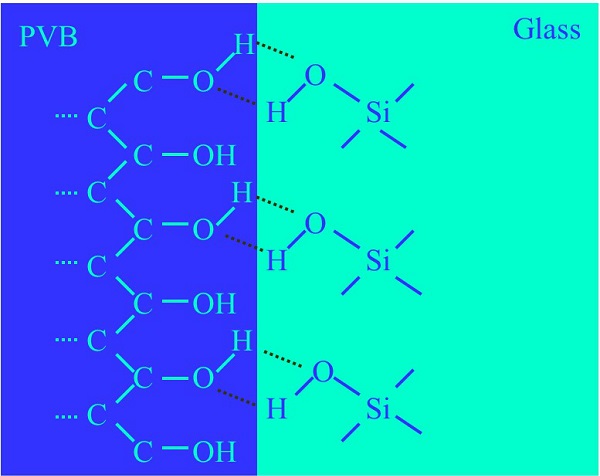 The adhesion from PVB to glass is ensured through hydrogen bonding between hydroxyl groups from PVB and silanol groups from glass. 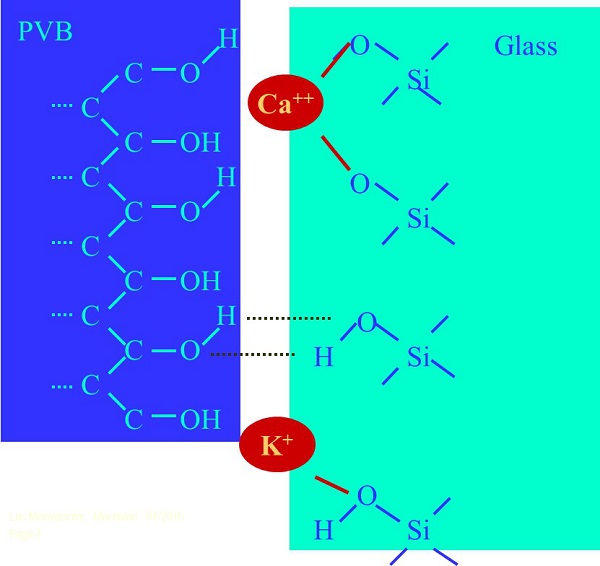 Alkaline and Earth Alkaline metal ions (on the glass surface) interact with the silanol groups. Rendering them unavailable for bonding with hydroxyl groups from the PVB.

As a consequence, the adhesion of the PVB to the glass will be reduced.

Adhesion of PVB to the tin-side of the float glass, can be lower/reduced versus the adhesion to the air-side of the glass, due to the presence of tin-ions (from the tin bath of the float process). The thicker the glass, the longer time it has been floating on the tin bath, collecting tin-atoms (the more tin contamination/reduction potential of adhesion).

The difference used to be more than a Pummel unit (90’s), currently negligeable in most cases.

PVB has a large number of Hydroxyl-groups (from PVA), providing it a high affinity to water molecules.

Also, glass has a large amount of silanol groups, creating the same surface phenomenon of hygroscopy.

Influence of water on adhesion. 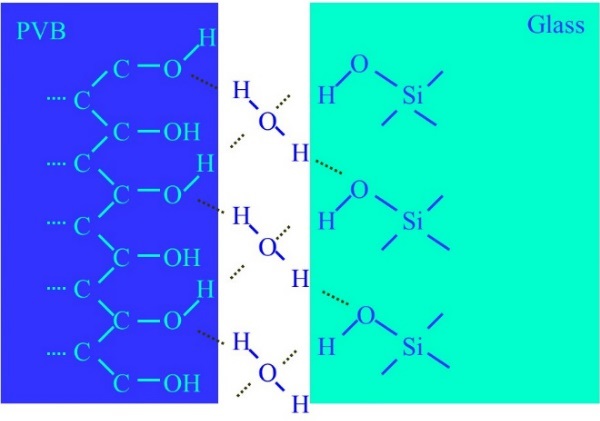 How can adhesion be controlled?

- By controlling the Hydroxyl level.

- By adding a controlled amount of alkaline/earth alkaline metal ions. 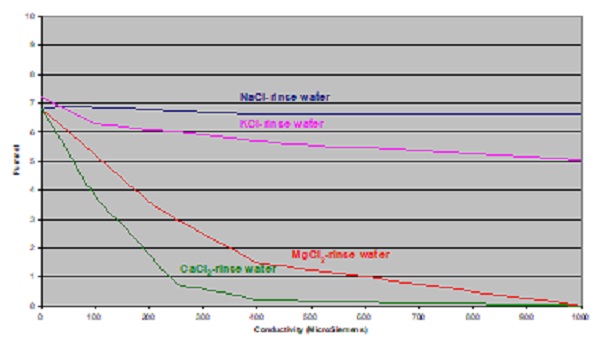 - By controlling the PVB-moisture level.

- By controlling the washing/rinsing of the glass.

- Ensuring an equal level of metal ions on the glass so that the adhesion is influenced in the same way for all laminates/glasses.

- By maintaining a constant RH in the assembly room.

- A constant Relative Humidity in the area’s where PVB is exposed to the ambient should be around 30 % RH, to minimize the influence of water absorption by the PVB (0.45 % moisture content for PVB is related to 30 % relative humidity)

(each process step can influence adhesion)

- Bringing the glass lites above the glass transition temperature ‘rejuvenates” the glass (eliminates the “gel layer” at the glass surface) but can change the chemistry (ions exuded into the gel layer).

- Washing process and quality of wash and rinse water.

- Tin versus Air side from the float glass.

- Tin (being a metal ion) can influence the hydrogen bonding/adhesion. Due to the float glass quality is a lesser issue these days.

- Thicker glass resides longer on the tin bath of the float process so could contain more tin and could influence the adhesion more.

- Drying while stretching will influence the moisture content of the PVB that can affect the adhesion.

- Reduction of caliper (PVB thickness) will influence the impact performance.

- The autoclave/glass temperature should be minimum 125 °C and should be evenly applied (allow enough time for block autoclaving glass to “undergo“ equal temperatures.

How can PVB/Glass adhesion be measured?

An adhesion level evaluation that is used in quality control of production sites.

- The hammer should drop on regular intervals to ensure a uniform glass breakage.

- Let the sample condition to room temperature to ensure dew formation is removed.

- The amount of ‘free PVB film surface’ is estimated, using reference to some “Pummel standards”, supplied by the PVB supplier.

Note that this is a very subjective way of judging adhesion (glass fragments adhering to the PVB), comparing/rating to pictures supplied by the PVB manufacturer. 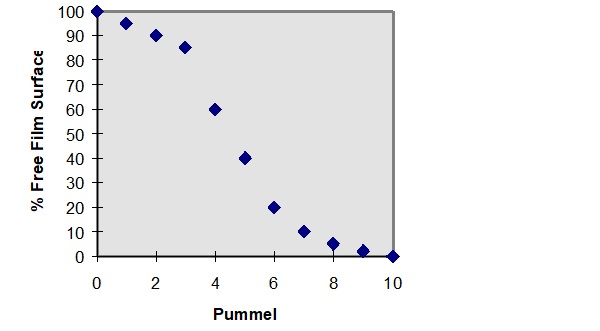 Pummel values between 3 and 7 are advisable (linear part of the correlation- see graph).

Samples (6) cut out of a laminate (25.4 X 25.4 mm) are separated under an angle of 45 degrees (simulating resultant forces during impact on laminated glass samples – pushing rather than pulling forces).

Statistics of all test results are calculated. 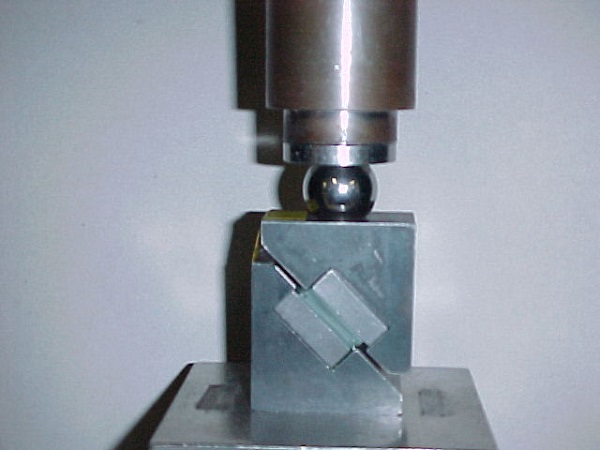 Circular samples, drilled out of laminated glass, are separated in a rotative movement. The force applied is registered as Torsion level.

Determines the force to separate a piece of laminate under 90 degree angle. 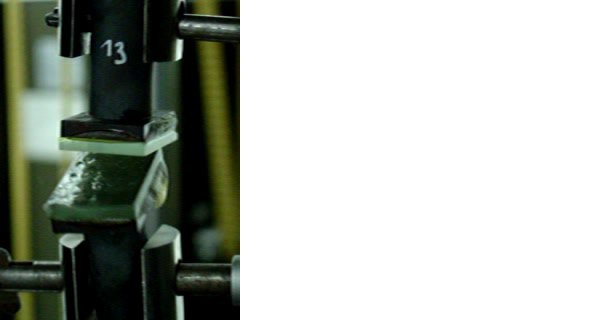 Registers the force needed to peel the interlayer from the glass.

There is the need for a specially prepared “laminate sample with PET”, using a different substrate from glass...

Equal PVB film will provide a different CSS value depending on the PVB thickness. The rule of thumb is that the CSS adhesion will reduce to 66 % of the original value when the PVB thickness is doubled. (see graph below). 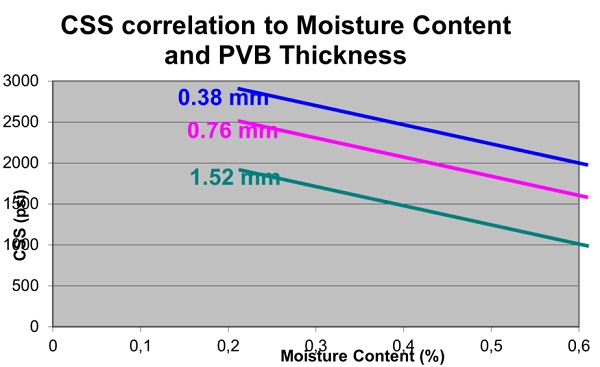 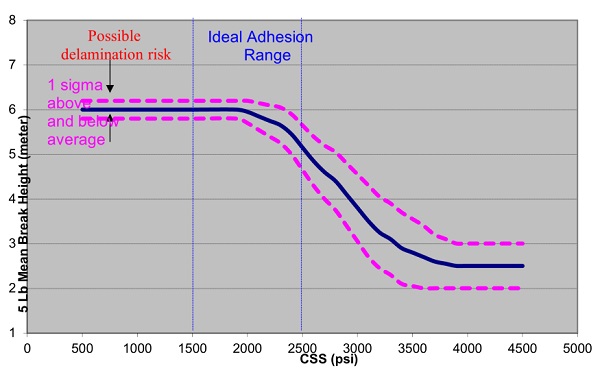 The position of the curve is a function of:

Pictures are shown with reference to the source of the picture.

If the info is wrong, please contact author with correct info for document correction. 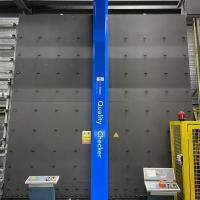