Trosifol®: Creating a scene at the Marina Bay Sands Hotel and Skypark in Singapore 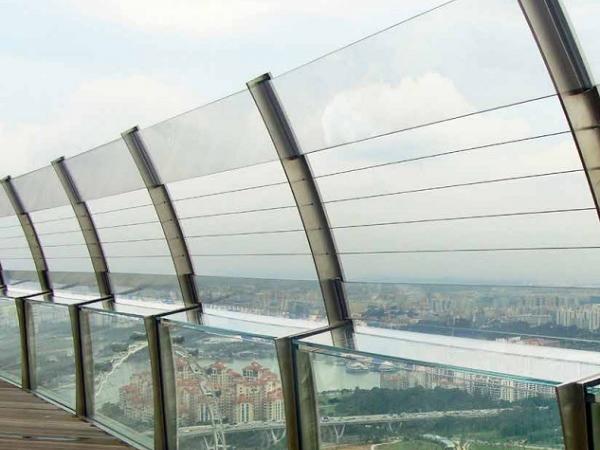 The Marina Bay Sands SkyPark in Singapore is a cantilevered 340-meter(1115-feet)-long tropical oasis spanning three hotel towers and 2,500 guest rooms, crowning state-of-the-art convention and exhibition facilities, theaters, world-class casino entertainment and some of the best shopping and dining in the region.

The gravity-defying structure is one of the largest of its kind, anywhere. Its length exceeds the height of the Eiffel Tower. Its area (1.2 hectares/2,420 ac) is big enough to park four jumbo jets. The SkyPark’s goal is to attract and delight visitors to the Marina Bay Sands Hotel, and to help lift Singapore as a leading travel destination and meeting-place. To do that, architect Moshe Rasdie and owner Las Vegas Sands Corp. decided to literally “create a scene.”

Approached from sea, the innovative Marina Bay Sands SkyPark looks like a giant ship, berthed in the sky. From the skyship’s wooden-planked observation deck, 200 meters (656 feet) up in the air, hundreds of people at a time can take in the surrounding Singapore views. Those views ... and the people who come to see them ... are protected by a clear glass windscreen and safety railing made stronger and lighter using SentryGlas® ionoplast interlayers.

Marina Bay Sands President and CEO Thomas Arasi calls the SkyPark “one of the greatest architectural feats of modern times. Sands SkyPark will be a must-visit destination and will certainly put Singapore on the global map.”

Rooftop views require attention to detail. For people to feel comfortable, and less exposed to buffeting winds, a windscreen is often helpful. And when visitors walk around on a roof, all reasonable care must be taken to protect them from falling off the building, or causing objects to fall on people below. Glass balustrades, or railings, made with SentryGlas® interlayers are being used with increasing frequency on rooftops, as well as observation towers, oceanfront housing and cruise ship decks where designers want to maximize available viewscape assets by applying the latest generation of laminated glass.

The interlayer’s post-glass-breakage strength helps maintain barrier and safety properties even after a glass panel has been broken. This adds an extra measure of human safety. And with SentryGlas®, architects have discovered a perfect companion for low-iron glass. The ionoplast-based laminating sheet emphasizes low-iron glass clarity, helping let more natural light come through.

With such a magnificent vista and so many Singapore attractions to see, SkyPark visitors care assisted by audio touchpoints along the edge of the glass-protected roof deck, identifying local landscape features, commercial zones and historical areas. The SkyPark is open daily from 10 a.m. to 10 p.m.

“The opening of the Sands SkyPark signifies an important milestone for Marina Bay Sands,” said Thomas Adelson, CEO of Las Vegas Sands, the project owner. “This has been the single, most challenging engineering component of our unique integrated resort and to see it materialize is an incredibly proud moment for us. Marina Bay Sands along with its signature Sands SkyPark will be a truly impressive icon and we are excited to present this bold architecture to not only Singapore but to the rest of the world.”

As well as improved strength and stiffness, other benefits of SentryGlas® include:

600450
www.trosifol.com
Trosifol®: Creating a scene at the Marina Bay Sands Hotel and Skypark in Singapore glassonweb.com