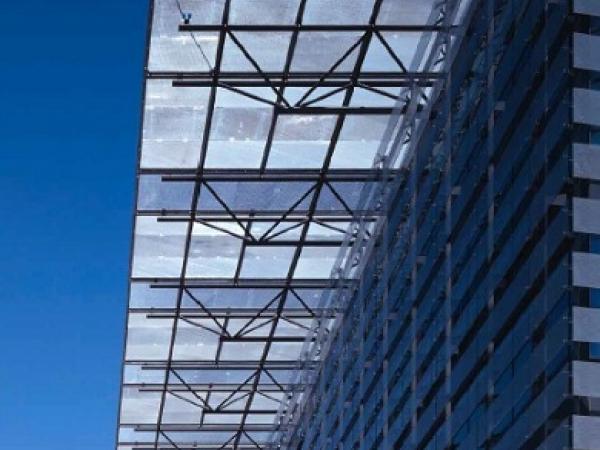 Designed and built by Bellapart s.a.u. between May 2001 and June 2003, the atrium roof and façades of the Endesa Headquarters in Madrid, Spain, have recently undergone inspection and testing to check for any degradation in the glazing.

Designed by Kohn Pedersen Fox Associates (KPF) and engineered and built by Bellapart s.a.u. between May 2001 and June 2003, the atrium roof and façades of the Endesa Headquarters in Madrid, Spain, have recently undergone inspection and testing to check for any degradation in the glazing.

The multiple glass panels – the first to use DuPont™ SentryGlas® in Europe – were found to be in extremely good conditions. So good was the condition that the tester commented that they looked and performed remarkably similar to more recently fabricated glass laminated panels.

The 113 x 36 m roof of the Endesa HQ comprises an almost horizontal flat glass surface composed of 861 point-fixed laminated glass panes, with a total area of approximately 3,150 m2. The glass panels, which vary in shape and size depending on their location, all feature a three-layer construction, comprising 8 mm heat-soaked fully-tempered SLS glass top and bottom plies, sandwiching a 2.28 mm (90 mil) SentryGlas® Interlayer fixed with four point fixations and a silicone sealing between the panels.

The testing and lamination quality check involved removing an 11-year-old glass pane from the roof and then subjecting it to a thorough visual inspection prior to performing a pummel test; both of which were performed by a DuPont Technical Manager.

So good was the condition that the tester commented that they looked and performed remarkably similar to more recently fabricated glass laminated panels.

The pummel test – a test used on a regular basis by laminators to evaluate adhesion – was then performed on an area adjacent to a glass vertex, as it is the area most exposed to moisture ingress and degradation. The test showed a level of adhesion similar to that exhibited by much more recently laminated glass; proving that SentryGlas® panels exposed to environmental conditions such as those found in Madrid (hot summers and cold winters) demonstrates very good structural behaviour, even after 11 years.

Francesc Arbos Bellapart, chief engineer for Bellapart S.A.U on the Endesa project exclaims: "It is stronger, it is lighter and it is safer. The amazing thing is if you factor in the structural efficiency of a laminate using SentryGlas® it is cheaper than using conventional laminated glass products. When the mathematics works, the beauty appears – that's SentryGlas®."

With total life cost playing an ever important role in just about every industry, it is becoming more and more important for engineers and architects to specify materials that can offer the greatest performance over the expected life of a structure.

Cristina Garcia, from Kohn Pedersen Fox Associates, the architects of the Endesa HQ, explains: "Some of the most beautiful buildings in the world use glass in incredibly creative ways and that draws people in. It really impacts the entire design and experience. If you are designing a structure that uses overhead, horizontal glass, it makes a lot of sense to use the strongest and safest material possible, and that is DuPont™ SentryGlas®."

SentryGlas® interlayers were first introduced into Europe at the beginning of the 2000, following their widespread use in the US over the previous decade as a main component for hurricane glazing. It offers higher stiffness, allows a reduction in glass thickness of up to 30% and superior postbreakage properties when compared to similar PVB-based laminates.

With total life cost playing an ever important role in just about every industry, it is becoming more and more important for engineers and architects to specify materials that can offer the greatest performance over the expected life of a structure.

With SentryGlas® offering this type of longevity coupled to its functional, safety, solar control and aesthetics characteristics, it is clear to see why it is specified in an ever-growing number of important architectural applications around the world. Architects can specify SentryGlas® with the confidence that it will perform in the short, medium and long term and keep delivering the same performance and structural integrity for many years.

Further information on this success story is available in an award-winning video klick HERE. The video won a Gold CINDY (Cinema in Industry) Award at the International Association of Audio Visual Communicators Fall 2013 International event.

For decades, interlayers made of polyvinyl butyral (PVB) have been the industry standard when producing laminated safety glass. Architects are well aware of the possibilities and limitations of such glass when used extensively in façade engineering, for roofing and window panels. In contrast, SentryGlas® enables an entirely new approach because the interlayer is over 100 times stiffer and five times stronger than PVB.

As a consequence, there is an almost perfect transmission of load between two laminated sheets of glass, even at high temperatures, leading to the excellent flexural behavior of the glass when under load – also under direct sunlight in high summer. Accordingly, laminates with SentryGlas® show less than half the rate of deflection when compared to laminates with PVB, when under the same load, and thus almost the same behavior as monolithic glass of the same thickness.

• Safety:
In the event of breakage, glass fragments remain firmly bonded to the interlayer, reducing the chance for injury.

• Security:
SentryGlas® can be used in glazing that withstands bullets, hurricane-force winds and even bomb blasts.

• Durability:
SentryGlas® is extremely durable and resistant to clouding, even after years of exposure.

• UV control:
SentryGlas® is available with our without UV transmittance