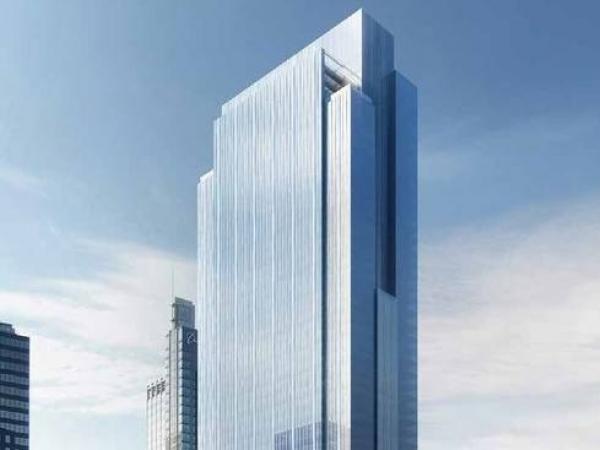 SentryGlas® interlayer was chosen primarily for its enhanced strength compared to laminates with PVB (which allowed a 30% thinner glass construction), its post-glass breakage retention properties and its visual clarity when used in combination with low-iron vision glass.

Due to open in early 2017, 150 North Riverside Plaza is a 54-storey, Class A office building located in one of the most prominent sites in Chicago. The building features 1.2 million square feet of leasable office space, a 7,000-square-foot fitness centre and conference facilities.

Although the building occupies a two-acre site, its unique superstructure design will only encompass 25 per cent of the two-acre lot, with the remaining 75 per cent set aside for a public park, amphitheatre and river walk.

The building’s façade will have a rippling texture created by undulating glass fins affixed at each vertical mullion in a unitised curtain wall system. The west side of the building features a dramatic lobby, almost 100 feet tall at its peak, that is surrounded by a structural glass fin wall system that allows significant natural daylight in, creating open areas that maximise transparency and that visually connect the interior and exterior.

The dramatic lobby is almost 100 feet tall at its peak and is surrounded by a structural glass fin wall system that allows significant natural daylight in, creating open areas that maximise transparency.
Photo credit: Goettsch Partners.

Joachim Schuessler, Principal and Senior Designer at Goettsch Partners, Inc., the architect of the building, commented: “The scale of the glass wall is magnificent - it’s one of the largest glass fin walls in North America. The laminated glass fins completely enclose the lobby and act as structural supports, so we were able to completely do without steel or aluminium support columns. The fins are approximately 30 metres tall and support the glass wall that hangs from the tip of the transfer truss at Level 8.”

Each glass fin comprises of 6 segments of laminated glass spliced together with custom 316 Stainless Steel splice plates and grouted bolts. The typical fin assemblies measure approximately 900 mm deep, with some atypical connections at approximately 1100 mm deep. The glass walls were designed and supplied by Nupress Group, with installation and coordination by Crown Corr. 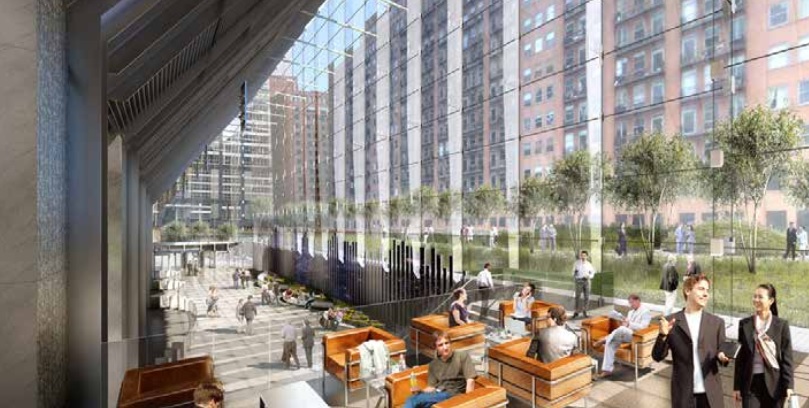 The architect avoided the use of metal beams in the lobby, creating a transparent, open and inviting lobby space.
Photo credit: Goettsch Partners.

“The decision to use laminated safety glass with SentryGlas® ionoplast interlayer was a collaborative one between Goettsch Partners and the structural engineer, Stutzki Engineering. Quite simply, without SentryGlas®, the glass fin design of the lobby would not have been possible on this project. No other glass interlayer can provide the stiffness and visual clarity that we needed, as well as postglass breakage retention to satisfy the building’s safety regulations,” added Schuessler.

The visual clarity of laminated glass was also an important factor. Visual clarity is normally measured using the Yellowness Index (YI), which is a number calculated from spectrophotometric data that describes the change in color of a test sample from clear or white toward yellow.

Low-iron glass provides improved visual clarity by increasing light transmission and reducing the greenish tint in clear glass that is most apparent when viewed from the edge. Due to its high clarity, SentryGlas® ionoplast interlayers eliminate the undesirable ‘yellow’ tint that affects safety glass produced with conventional interlayers.

With a YI that starts at 1.5 or less (compared to 6-12 YI for some PVB alternatives, only Trosifol® PVB interlayers reach a similar YI as SentryGlas®), SentryGlas® keeps its initial clarity after years of service.

The primary reasons for choosing SentryGlas® interlayer were its enhanced strength which allowed thinner glass fins to be used, as well as its post-glass breakage retention and visual transparency with lowiron glass.
Photo credit: Stutzki

“The architect wanted to avoid the use of metal beams or columns in the lobby in order to create a more transparent, open lobby space. We therefore specified laminated vision glass with SentryGlas® ionoplast interlayer, as we knew this was the only laminate that would give us the structural properties and lightness, as well as crystal clear transparency that we required.

We considered PVB interlayers, but we would have needed an extra layer of glass in the make up, which in turn would have increased the overall weight of the glass fin walls by 30 per cent, so it was never really an option. SentryGlas® ionoplast interlayer is a critical, active structural element in the fin walls.”

These simulation models allow us to predict the performance of the two interlayers under various loads. The results of these tests showed that there was a huge benefit of using SentryGlas® ionoplast interlayer rather than PVB interlayer for stability and strength of glass fins.”

For the 150 North Riverside Plaza project, Stutzki Engineering specified the tests to be conducted on the glass fins. The actual tests were carried out by Nupress Group.

Worldwide, there is an increasing trend in the use of glass fins in residential (private) buildings, commercial (offices) buildings and retail outlets. This trend is being driven by the increased desire for more open designs with less visible framing and structural supports, resulting in glazing designs that provide greater transparency and visibility.

Glass laminates such as SentryGlas® ionoplast are able to fulfill the high architectural safety standards at a reduced thickness compared to both monolithic glass and laminates with PVB. This means that the supporting structures used for curtain-wall facades can be designed significantly lighter and therefore much more subtle in terms of their appearance.

Glastory: Could every glass surface be a power source?
I want you to think about your daily journey to work. Take a minute, visualize it – and then answer me this: How many glass surfaces did you see? Too many to remember?
Fill-In-Glass Restoration
Exploring Issues Of Compatibility For The Case Of Schaesberg Castle
The TVT Glass Pavilion
Theoretical Study on a Highly Transparent Building Made with Long-Spanned TVT Portals Braced with Hybrid Glass-Steel Panels
Serrated Glass Facades: the Influence of Façade Morphology on Aesthetic Quality
Serrated building envelopes are a very eye-catching element of contemporary architecture. This type of façade in plan resembles the edges of a serrated blade, hence the name.
AI automates the glass fragmentation test
Do you still spend precious time doing the meticulous task of manually counting glass cullets for a glass fragmentation test? Or maybe your modern counting tool is not exactly the gold standard? If so, we have some good news for you!
The Aesthetics of Color in Architecture Glass Facades
Research deals with the effect of using color in aesthetic taste of architectural interfaces as one of the most important problems affecting the architectural form.

Get Ready for the 24th Annual BEC Conference!