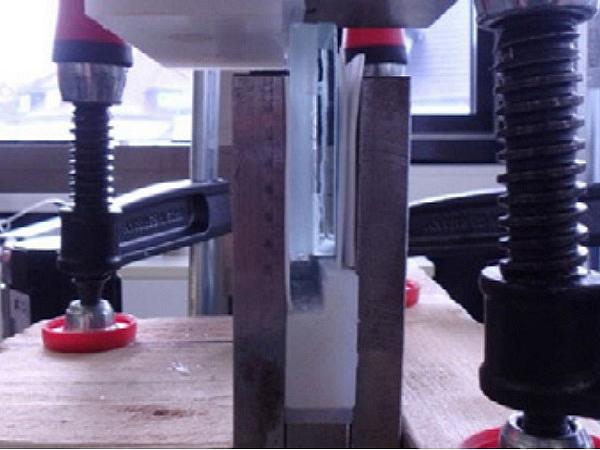 The paper describes the research and development of phosphorescent glass.

This paper was first presented at GPD 2019 by Stefan Reich, Shawn Ives and Christian Pfütze from Anhalt University of Applied Sciences.

Defined by the building law in each publicly accessible building (e.g. schools, administration etc.) emergency exit routes have to be marked. This is usually realized by means of active or passive lightening systems. The use of passive lightening systems require comprehensive components with an independent, battery-powered energy-supply that produces light even in the case of an energy black-out (e.g. disaster situations), which makes the systems complicated and expansive.

Alternatively after-glowing, phosphorescent signs, attached on walls, wallpapers or doors are an existing alternative. Mostly known to everybody are the green emergency exit signs. Used inside of buildings their appearance has mostly a disturbing and negative attitude, even more at premium interior designs.

Both described solutions have been known for many decades and possess individual disadvantages. There-fore the composition of passive lightened systems with premiumquality surfaces leads to a widely usable product phosphorescent glass. This glass consists of laminated glass with a phosphorescent paint application within the glass interlayer. The paper describes the research and development of phosphorescent glass.

The processing focus lies on the materials investigation of different paints, different EVA-interlayers and glass surfaces with respect to various glass laminate build-ups as well as the development of an appropriate application process of the multi-layer paint application. The second part explains the mechanical testing of the laminated glass specimens with regard to their shear and balldrop strength before and after accelerated aging in temperature-moisture climate similar to IGU-testing standards.

If we look into our office or residential spaces there are many situations with illuminated signs in the dark. The most common ones are emergency exit signs. State of the art is the use of phosphorescent plastic signs or battery powered lighted signs that are attached to walls or phosphorescent paint used for emergency exit lanes. All together is the lack of high quality surfaces with phosphorescent functions.

Starting with this situation, we asked if we could obtain laminated glass with patterns, which can glow in the dark with phosphorescent materials inside the glasses, therefore between a glass panel and an interlayer or between two interlayer films. Possible applications of this phosphorescence glass can be divided into interior design uses without any building code requirement and load bearing structurally glasses, e.g. facades panels, as covered in building codes.

2.1 The norms and test background

Whereas (i) and (ii) consider individual quality and performance specifications, (iii) long term behaviour of laminated safety glass requires the adoption of existing aging test procedure to LSG to judge the resistance against humidity and temperature. We decided to use the aging cycle of EN 1279-2 [1] for the aging tests. Although phosphorescent glass laminates are usually not exposed to climate loads as IGUs the test puts the glasses into a climate aging process. As result, we describe the visual appearance of the glasses as qualitative benchmark for glass resistance against humidity and temperature.

For the shear resistance (iv), we will simply compare the shear resistance of our samples and compare them to laminated safety glass (LSG) we can find in construction. The test results serve as qualitative comparable values of the shear strength of the laminates. The ball drop testing (v) according to standard LSG tests is the final test series to describe the relative behaviour of different phosphorescent glass build-ups to standard LSG. These tests allow considering the use of the phosphorescent glass as structural element.

In this project, our industrial partner should be enabled to control the whole production process, which means we did not consider using phosphorescent films to integrate in the laminates to prevent any chemical incompatibility. The choice of interlayer materials, the lamination process as well as the application of wet phosphorescent paint products occurred according to the company production specifications.

Generally, we used the materials float glass, different EVA-interlayers and different phosphorescent colours to build the samples. We focused on green phosphorescent paint. This colour has the maximum glowing intensity compared to other colours. Standard brush paint “Afterglow Color Water-based green” (from UV-elements) and spray “Phosporescent Spray Paint” (from StardustColors) were applied and investigated. Four different EVAfilms were used as interlayer material.

The contact angles are read in a way, where 0° is a complete wetting. Between 0° and 90°, the solid is wettable and above 90° it is not wettable.

Generally, the wetting results are better on sanded glass compared to a smooth glass surface, which shows a more similar and equal colour quality. The surface angle does not invite the application of the paint directly on EVA-film that does not show appropriate visual appearance during the specimen production.

About the risk in case of fire, it is as important as without the paint, this is because of the EVA films. In the technical description of the paint, it is not inflammable, but in case of thermoreaction, it will release carbon monoxide and carbon dioxide.

Phosphorescence means the absorption of energy by a material or substance and released as light. It is in some aspect similar to fluorescence except that the release of energy in the form of light takes a longer time.

A phosphorescent paint will thus charge itself during an exposure to UV-light (contained in natural light) and will “glow-inthe-dark” during the night. The progress of phosphorescent pigments allows to charge pigments enough during a short day to glow a whole night, although no producer can guarantee a full night with a powerful glow.

The research was considered as a two-stage process, with a broad preliminary testing and specified details testing series.

The preliminary testing included the shear and durability tests of the specimen. Main objective of these tests was to define the principle build-up of the phosphorescence glass: does the paint need to be in con-tact with the glass or between two interlayer films? So logically, two build-up designs were chosen, shown in Fig 3 and 4. The total thickness of the interlayer films was 0.76 mm in both build-ups.

Another factor was the choice between liquid paint and spray paint for the aesthetic aspect and the reaction with the films. The matrixes of the executed experiments are shown in the following tables.

The first panel of glass has to be cleaned; the paint is then applied in 6 layers with a drying time of 30 seconds between each layer for spray paint and one of 30 minutes for liquid paint. Then, the samples are left to dry for at least 4 days to reduce the volatile organic compounds. The second panel of glass is then cleaned as well. Afterwards the film is put in between the two glass panels and the glass is laminated in a vacuum bag.

3.4 Results of durability and shear tests

The durability test results confirmed the experiences gathered at the samples production, that the application of paint on the interlayer does not deliver a sufficient optical quality.

The application of the paint directly on the float glass surface delivered much better visual qualities, but also showed that EVA2 and EVA3 produced significantly more bubbles and flaws than EVA1 and EVA4, that deliver a satisfying result with minimum delamination. Furthermore, the aesthetic value of the brushed paint is not convincing, therefore only the sprayed paint will be used for further tests.

The samples have been charged 12 hours with standard interior light and measured directly after the charging to obtain the values of table.

Measuring the luminescence confirms that the samples with sprayed paint glow with much more intensity and keep glowing in the dark for many hours whereas the samples with liquid paint stop glowing after few hours. The similar glowing intensity of the specimens in both pictures is caused by different exposure times of the camera. Applying phosphorescent paint between two films lead to lower luminescence as the charging of the colour is hindered by the reduced light transmission ratio of the EVA.

Because of the preliminary testing results only EVA 1 and 4 and spray paint applied on sanded glasses instead of smooth float glasses are used further. It was expected that the samples react differently due to the paint layers number and area of the painted surface. The specimens have a 3 cm wide frame to avoid any influence of an open paint edge.

For the shear test samples, the same number of layers are used but also the covered area factor of 20%, 50% and 80% paint area.

The ball drop tests according to EN 14449 were done with identical paint pattern. All samples possess eight paint layers and are partly sanded at the painted area. Thirty specimens were produced only with EVA2, due to a final production shut-down of EVA1.

The durability tests confirmed the preliminary results for samples with both EVA-films. A deterioration of the visual appearance was not observed after the testing. The 3 cm EVAframe around the paint acts as proofing and protects the painted areas. The results of the shear testing are shown in the table.

The shear tests of 145 samples show a higher shear strength of laminates with EVA1 compared to EVA4. A positive effect of a sanded surface on the shear strength is supposed, as the non-sanded and/or non-painted samples achieved lower shear strength than sanded ones. An influence of paint thickness (no. of layers) and paint area ratio cannot clearly derived from the results. More specimen had to be tested to clarify these influence parameters. The results of the ball drop test are currently pending.

Several hundred samples of many buildups and material combinations were tested. They showed that the application process is essential for a successful phosphorescent glass. A fine-tuned composition of paint, interlayer and surface plus a proofed application process lead us to convincing specimens. A paint application on the interlayer should be avoided whereas paint on a sanded glass surface showed the most stable and durable behaviour. The durability testing demonstrated the long term stability for interior uses. The shear strength stays at the level of compare samples of pure LSG without paint.

This research was commonly conducted with the company GlasAhne GmbH from Pirna, Germany and funded by the German Federal Ministry for Economic Affairs and Energy in the AiF-ZIM funding. We like to thank both parties for supporting this research.

Considerations for the Integration of Glass in Superyacht Structures
This paper gives an overview of the requirements of a ship structure, and more specifically yacht structures, and describes the challenges associated with using glass as a fully integrated structural component.
Exploratory study on the load-bearing behaviour of laminated glass beams exposed to fire
This study provides a closer look at fire performance of glass beams and proposes further examinations to increase the load-bearing capacity in case of fire.
The Performance of Vacuum Insulating Glazing Units Subjected to a Soft Body Impact
The goal of this work is to investigate the mechanical performance of VIG’s subjected to soft body impact and gain insight into the failure mechanisms of the VIG when exposed to dynamic loads.
Adhesive solutions for cast glass assemblies
Ground rules emerging from built case studies on adhesive selection and experimental validation.
Differentiation in Architecture by Professional Designs and New Materials
The economy globalizes. The industries concentrate. The productions become uniform. Cultural specificities disappear. About architecture and glass in architecture, it is the same phenomenon.
Ahead of the Curve: Innovative Cold Bent & Insulated Glass Entry Wall
“Going ahead of the Curve” is what the advertisement states outside of newly remodeled, Class A office building at 160 Elgin Street in Ottawa, Canada.