SentryGlas® equipped glazing stands up to the might of Hurricane Harvey 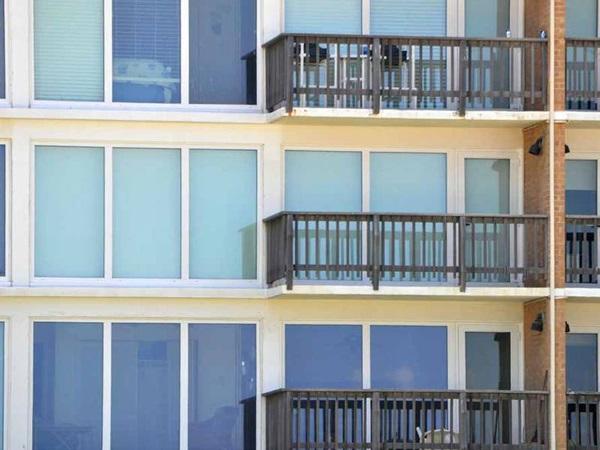 The Gulfstream Condominiums on North Padre Island, near Corpus Christi, Texas USA faced the full wrath of Hurricane Harvey on August 25th, 2017. But, even after being subjected to sustained wind speeds of up to 97 mph (156 km/h), the complex was back in business just four days after the storm.

The condominium’s resilience in the face of such a severe storm was not only down to the strength of its impressive 47-year old structure, but also a decision made five years ago — during an extensive refurbishment — to install high performance stormresistant glazing that incorporated 90 mil (2.28 mm) SentryGlas® Ionoplast interlayers from Trosifol™.

Originally developed for the high-building-envelope protection required for hurricane glazing in the United States, SentryGlas® did exactly what it was designed to do at the Gulfstream Condominiums – prevent glass breakage and the subsequent ingress of water and wind-borne debris that accompanies storms of this magnitude.

To put this in context, the storm dumped a year’s-worth of rain in less than a week on Houston and much of South Eastern Texas.

According to a member of the management team at the complex: “This is a 47 year old building and all the windows were replaced as the result of a mandate from the board of owners. It was determined that hurricaneresistant glazing should be used due to our proximity to the beach and the potential impact of strong winds and storm events.

We did have some damage to our roof and some of the fences and pergolas, but there was no structural damage and once the water, gas and electricity had been restored we were able to open up the complex just four days after Harvey. The damage along the coast was extensive, with some complexes experiencing massive glazing failures, which, due to the extensive repairs required, have resulted in them only being able to reopen in summer 2018.

“We used Lee Little, a local contractor, to undertake the refurbishment work,” the management representative continues, “and although the storm-resistant glazing was more expensive than standard solutions, our decision has been more than vindicated by the fact that we were able to reopen the complex so quickly after Harvey.”

According to Lee Little: “Over the last 12 years we have installed some 7,000 panels of laminated safety glass that we ordered from Orlando, USA-based WinDoor, and during Hurricane Harvey not a single one failed. Even one cracked panel in a condominium in Port Aransas that was due to be replaced before the storm, showed no further breakage after the storm. As you can imagine, damage repairs are monopolizing a lot of our time at the moment and the highly visible lack of damage to the Gulfstream Condominiums has meant that most of the glazing repairs we are undertaking are being mandated by the owners to incorporate storm-resistant interlayers such as SentryGlas®. In fact, since Harvey, we are in the process of taking orders from nine other complexes in the same area for an estimated 15,000 panels.”

The SentryGlas® interlayer from the Trosifol® Structural product family is five times stronger and up to 100 times stiffer than conventional laminating materials. With this kind of strength — in addition to its storm-resistant capabilities — the glass can also be deployed a more active structural element in the building envelope, opening up design possibilities that didn’t exist before.

This application of SentryGlas® is a graphic demonstration of a material admirably fulfilling its originally intended purpose.

With new coastal properties appearing all across the globe, architects are now able to consider glass as a structural component and use it in a wider variety of applications, without having to worry about strength, impact resistance, edge performance and yellowing — even in the face of more salt-laden environments.

Greater uptake in refurbishment efforts, such as those seen in Texas, will also help ensure that existing and historic buildings will be able to enjoy the same levels of protection and performance as their more contemporary new-build peers.

600450
www.trosifol.com
SentryGlas® equipped glazing stands up to the might of Hurricane Harvey glassonweb.com

Mappi and Tecnoglass: a story made of a shared passion for excellence
At the center of the Tecnoglass manufacturing process is the tempering furnace Mappi Ats 4.0 2500x5000
FEN-TECH implements FeneVision ERP software
A production solution for highly-customized manufacturing
The key themes at BAU 2021: Resources and recycling
Setting the pace and giving structure to the wide range of products and services on show—the four key themes chosen for BAU 2021.
Webinar: Understanding Window, Door And Skylight Certification
The Understanding Window, Door & Skylight Certification webinar is designed to help architects and remodelers understand the benefits of window, door and skylight certification, and how certified products can enhance their projects.
Holesov plant on a roll with new-format SentryGlas® Xtra™
Trosifol has announced that its new SentryGlas® Xtra™ (SGX™) ionoplast interlayer is now available in roll form from its plant in Holesov in the Czech Republic.
NGA to host co-located BEC + GPAD 2021 at Caesars Palace
NGA co-locates two premium conferences connecting glazing contractors and glass fabricators for education.