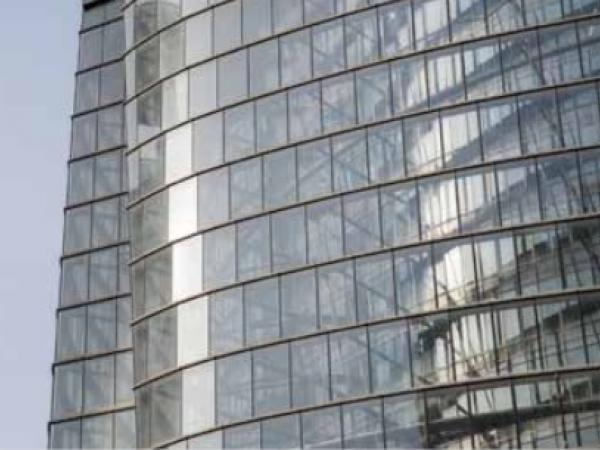 Laminated safety glass with SentryGlas® ionoplast interlayer has played a key role in enabling the design of a twisting, all-glass double skin façade on The Shanghai Tower in China — the world’s second tallest building after the Burj Khalifa in Dubai.

SentryGlas® interlayer was chosen primarily for its visual clarity in combination with low-iron glass, the enhanced strength it provided to the overall glass assembly, and because it eliminated edge delamination due to the exposed edges of the glass.

Completed in 2015, The Shanghai Tower is 632 metres (2,073 ft) high and has 128 stories, with a total floor area of 380,000 m2 (4,090,000 sq ft). The building’s tiered construction is designed for high energy efficiency and sustainability, providing multiple separate zones for office, retail and leisure use.

The Tower takes the form of nine cylindrical buildings stacked atop one another, all enclosed by the inner layer of the glass façade, which completes a 120-degree twist as it rises. Between the inner and outer layer of the façade are nine indoor zones that provide public space for visitors.

Both layers of the glass façade are transparent, which is unique as most buildings have only a single façade of highly reflective glass to lower heat absorption. The double layer of glass eliminates the need for either layer to be opaque and reduces the need for indoor air conditioning and heating.

In recognition of the building’s sustainable design, the owners of the building, Shanghai Tower Construction & Development, received certifications from the China Green Building Committee and the US Green Building Council. In addition, the China International Exchange Committee for Tall Buildings (CITAB) and the Council on Tall Buildings and Urban Habitat (CTBUH) recently awarded its CITAB-CTBUH 2016 China Innovation Award to the Shanghai Tower for its suspended glass curtain wall, which the judging panel recognised as “particularly novel”.

The Tower’s architect, Gensler, identified three key design strategies — the tower’s asymmetrical form, its tapering profile and its rounded corners – which would allow the building to withstand the typhoon force winds that are common in Shanghai. Using wind tunnel tests conducted in a Canadian lab, Gensler and structural engineer Thornton Tomasetti, refined the tower’s form, which reduced building wind loads by 24%. The result is a lighter structure that saved $58 million in costly construction materials.

The Shanghai Tower takes the form of nine cylindrical buildings stacked atop one another, all enclosed by the inner layer of the glass façade, which completes a 120-degree twist as it rises. This design reduces wind loads on the building by 24%.

Designed with 20,589 wall panels with 7,000 unique shapes, the double skin glass façade is suspended from above on massive cantilevered trusses and stabilised by hoop rings and struts. The circular inner glass façade required 14% less glass than a square building of the same floor area.

The primary reasons for choosing SentryGlas® as the interlayer were the enhanced strength that it provided to the overall glass assembly and the elimination of any edge delamination due to exposed glass edges in the structural silicone glazing. SentryGlas® also contributed to the overall sustainability of the tower by allowing a light coating to be used in conjunction with the interlayer for solar control.

The choice of interlayer was also an important consideration for the glass laminator, Shanghai Yaohua Pilkington (SYP) based in China and by the façade consultant. Initially, SentryGlas® was specified for the outer skin façade only, but the project scope was later increased to include the inner façade, podium building façade, glass fins and interior balustrades. In total, approximately 200,000 square metres of SentryGlas® interlayer were used in the building.

For the glass façade, local building codes had to be considered. In China, the “Technical Code for Glass Curtainwall Engineering” (JGJ 102, Revised Version) is currently under review by the Chinese Government.

According to this revised code, glass facades for schools, children’s play areas and other public buildings must use laminated glass. In addition, the code work specifies “ionoplast interlayers” as the official recommended interlayer for glass laminated facades (previously only PVB was listed). The code work also advises that Effective Thickness Calculations should use the ASTM-E1300 (Standard Practice for Determining Load Resistance of Glass in Buildings) standard to ensure low probability of glass breakage.

More than 200,000 square metres of SentryGlas® interlayer is used in the double skin glass facades.

The laminated glass with SentryGlas® interlayer was also subjected to a number of stringent tests, including subjecting the mock-up to a full test regimen for air, water, dynamic wind, structural load, wind loads, and differential structural movements, in accordance with China, US and European standards.

The visual clarity of laminated glass was also an important factor. Visual clarity is normally measured using the Yellowness Index (YI), which is a measure of the tendency of plastics to turn yellow upon long-term exposure to light. Low-iron glass provides improved visual clarity by increasing light transmission and reducing the greenish tint in clear glass that is most apparent when viewed from the edge.

Due to its high clarity, SentryGlas® ionoplast interlayers eliminate the undesirable ‘yellow’ or ‘greenish’ tint that affects safety glass produced with conventional interlayers such as PVB, even at the outermost edge of weather-exposed laminates. Not only does SentryGlas® start clearer than other safety glass interlayers, it also remains clearer throughout its life. The interlayer remains clear, there are no adhesives, other laminating aids or additives to be concerned about inside the composite material. With a YI that starts at 1.5 or less (compared to 6-12 YI for PVB alternatives), SentryGlas® keeps its initial clarity after years of service.

The benefits of laminated glass with SentryGlas®

Worldwide, there is an increasing trend in the use of glass in facades in residential (private), commercial (public) buildings and retail storefronts. This trend is being driven, particularly in public buildings, by the increased desire to have a clear view from virtually anywhere, and by the desire to provide more natural daylight into interior spaces.

Glass laminates such as SentryGlas® ionoplast are able to fulfill the high architectural safety standards at a reduced thickness compared to both monolithic glass and laminates with PVB. This means that the supporting structures used for curtain-wall facades can be designed significantly lighter and therefore much more subtle in terms of their appearance.

Probabilistic Study of Wind-temperature Interaction
An Initial Study Towards Optimized Structural Assessment of Glass Components
Glass Constructions Under Extreme Boundary Conditions
Constructions at exceptional locations are often challenging but worth one’s while. Extreme boundary conditions and sophisticated demands of the client have to be considered.
Minimum Energy Performance Requirements for Window Replacement in the 28 EU Member States
In the European Union, Member States are allowed to set minimum performance requirements to construction products available on their market.
20 Farringdon Street - Case Study
Unitised Façade System Designed with a Highly Transparent Façade of Low G-value Combined with Blast Requirements
Glass Fins in Architecture
For years and years research, development and discussions have been made on the safety of glass structures.
Designing Impact Glazing to Meet Tornado Performance Standards
Building code requirements for wind-borne debris protection have been in existence since the mid- 1990s, and as a result, many glazing systems have been tested and certified to these performance requirements.
Comparative study of laminated glass fins using full-scale testing, finite element modeling, and buckling formulas
For nearly 50 years, glass has been used as structural elements in glass fin applications. These applications include interior and exterior projects, supporting facades, canopies, storefronts, curtain walls and skylights.
Physical properties of SentryGlas® and Butacite®
Originally developed for glazing in hurricane zones, SentryGlas® ionoplast interlayers are significantly stiffer than standard PVBs such as Butacite®.
Post Breakage Strength Testing for Overhead Laminated Glass Applications
Post breakage strength of glass is still an unknown area as analytical models for this are inconclusive so far and thus destructive testing is the only reliable solution.
Smart products in the façade: Dynamic glazing III
This article is dedicated to dynamic glazing in the façade. This is an update of the articles on smart products in the façade I and II published in March 2019 and May 2020.
Structural glass: A new remedial tool for the consolidation of historic structures
This research investigates the potential of glass as a new design tool to highlight and safeguard our historic structures.
Glass Design in Switzerland
The Swiss society of engineers and architects (SIA) initiated a structural glass standard committee with the task to develop a Swiss glass design standard. 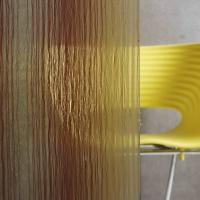 R.C.N. Solutions: not only digital