Acoustic properties of glass: not so simple 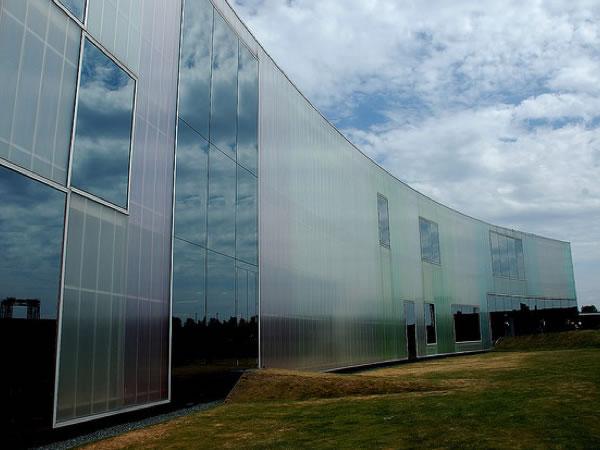 At Arup, working with different specialists creates many opportunities to learn from each other. Sometimes one forgets that engineers who know everything about dark matters as climatic loads in glass or intricacies of structural silicone may not have a clue about the acoustic performance of a window

That's why these questions keep coming to my desk (remember I'm an incurable generalist in the façades world): what effect does glass thickness have in the acoustics of a double glass unit? Or what matters more in the acoustical performance of insulated glass: the thickness in a monolithic pane, the effect of lamination or the dimension of the cavity?

Here you will find some graphical answers to these questions. As usual a number of hidden surprises will come out from the data mining.

Let us start by reviewing two concepts that are paramount to measuring glass performance against noise: loudness (in particular sound pressure level, the decibels thing) and frequency (the Hertz, not related to car rental)

From physics to applied acoustics in buildings. No pain, promised. Loudness is an intuitive concept: a loud noise usually has a larger pressure variation and a weak one has a smaller pressure variation. Depending on what we are looking for - the cause, the effect or the perception of noise - we use different variables and units:

Sound pressure level or SPL (here comes the fun) refers to the perception of noise in humans as it can be "read" by our ears. So SPL is what matters to us, poor construction buddies. For ease of numbering SPL is measured in decibels (dB). A dB is a dimensionless unit used to express logarithmically the ratio of a value (the measured sound pressure) to a reference value (the lower threshold of hearing). Decibels are used since sound pressure level expressed in Pa would be too wide. 0 dB (the lower threshold of audition for humans) equals 0,00002 Pa; whilst 140 dB (the upper human threshold or threshold of pain) equals 200 Pa. This is a range of 140 against 10 million. But logarithms are not "natural" to understand, so some examples will be of help.

Sound intensity, sound pressure and sound pressure level are obviously related, but they measure different things and they should not be confused. The table below, taken from the very useful Sengpiel audio webpage provides some tips for getting it right, at least conceptually:

Lessons from the table above:

We got the point: sound pressure level measured in dB (sometimes indicated as dB-SPL) is critical for architectural physics - a small variation can make a lot of difference. But loudness (sound expressed as pressure variation) is not the only story. Noise - what we want to avoid inside our buildings - is the mixture of sounds of different "quality", some are bass, some are treble. Is our façade or our glass pane capable of stopping each of these "noise qualities" in the same percentage? Could an envelope act as a barrier for bass and a filter for treble? What do bass and treble have to do with noise?

Sound is the quickly varying pressure wave travelling through a medium. When sound travels through air, the atmospheric pressure varies periodically (it kind of vibrates). The number of pressure variations per second is called the frequency of sound, and it is measured in Hertz (Hz) which is defined as the number of cycles per second.

The higher the frequency, the more high-pitched a sound is perceived. Sounds produced by drums have much lower frequencies than those produced by a whistle.

High-pitched sounds (treble) have a frequency much greater than bass sounds. The treble frequency ranges between 2,000 and 4,000 Hz while the bass range from 125 to 250 Hz.

Bad news: frequency and loudness are interrelated in the human ear. The range of 20 Hz to 20,000 Hz is called the audible frequency range - we know this already. But the sounds we hear are a mixture of various frequencies, and we don't perceive all of them with the same clarity. Let's see what the implication of this is.

This has led to the concept of weighting scales.

Other, less used weighting scales, are dB(B) and dB(C). The decibel C filter is practically linear over several octaves and is suitable for subjective measurements at very high sound pressure levels. The decibel B filter is between C and A.

That was enough for theory. Let us now see how all this affects the performance of glass as a real acoustic barrier.

The four hand-sketched graphs shown here below are all taken from the first edition of a great book called "Detailing for acoustics", written by Peter Lord and Duncan Templeton. There are three editions by now and I highly recommend buying one if you are an architect interested in acoustic issues applied to buildings.

The sound attenuation of any material depends on its mass, stiffness and damping characteristics. With a single glass pane the only effective way to increase its performance is to increase the thickness, because stiffness and damping cannot be changed. The sound transmission loss for a single glass pane, measured over a range of frequencies, varies depending on glass thickness.

Thicker glass tends to provide greater sound reduction even though it may actually transmit more sound at specific frequencies. Every glass pane thickness has a weak frequency value; that is, a frequency for which that glass is less 'noise absorbent' than for the others. That value is known as critical frequency. See the graphic below:

An insulating glass unit built with two panes of the same thickness experiences the issue of critical frequency: it is said that the two panes vibrate (resonate) together at that frequency, thus reducing the glass overall acoustic performance.

For this reason we recommend using different thickness in a double glass unit. A 6-12-4 mm glass will absorb more sound at high frequencies of 2000 Hz (claxon noise) than a 6-12-6 mm glass, in spite of having less mass. On the other hand, at lower frequencies between 125 and 250 Hz (traffic noise) this is not the case: a 6-12-6 mm glass reduces sound more effectively than a 6-12-4 mm glass. At low frequencies sound attenuation is directly proportional to mass.

A laminated glass will attenuate sound transmission more than a monolithic glass of the same mass. See the graph below:

A laminated glass of 2+2 mm reduces sound at high frequencies considerably more than a monolithic glass 4 mm-thick (that's 8 to 10 dB of additional attenuation). Why? because the critical frequency effect disappears due to the sound damping provided by polyvinyl butyral (the soft interlayer used to permanently bond the glass panes together dissipates energy by vibration). The same applies to the 3+3 mm laminated against the monolithic 6 mm. In contrast, at low frequencies (traffic noise) the effect of butyral is less pronounced, although it is still positive (about 2 dB increase).

Surprise: a standard double glazed unit does not reduce sound transmission much more than a monolithic glass. What matters is the thickness of the air space between glass panes, but only for really wide cavities.

The acoustic attenuation of a 6-12-6 mm glass is generally superior to that of a monolithic 6mm-thick glass, but only by 2 or 3 dB, and still there may be low frequency bands where the DGU performs worse. Of course if we compare a 6 mm-monolithic with a double glazed 12-6-10 mm, the sound reduction is much better at the double glazed unit.

What really matters is the width of the air space, not the small one found at double glazing but the one of a double skin. The ideal cavity width to boost sound attenuation is 200 mm. For widths less than (or greater than) 200 mm the effect is less noticeable (although a wide air space will always perform better than a narrow one). A double glazing with 10 mm air space performs almost like a 20 mm airspace.

The conclusion comes in the last graph: a combination of large thickness, different one between the two panes and wide air space distance (even better if we use laminated glass) provides the maximum noise attenuation. We can reach up to 45dB.

What about the effect of using argon or krypton instead of air? In theory, a higher density gas in the space between panes should have a positive effect on acoustical performance. Comparison testing of standard symmetrical insulating units indicates though that common gases as argon have virtually no increased effect on sound attenuation ratings. While some improvement was noted at some frequencies, resonance effects actually became more pronounced.

Rw index: The Rw index or sound reduction index (expressed in decibels) measures, in just one number, the acoustic performance of a specific glass unit. The higher the Rw index, the better the level of acoustic insulation offered by that glass composition. The Rw index of ordinary double glazing is around 29 dB whereas a good acoustic interlayer offers an Rw index of around 50 dB.

Rw is a single figure rating for the airborne sound insulation of building elements (not just glass). It includes a weighting for the human ear and measures actual sound transmittance. Rw is measured in a laboratory, not on site (the site-measured equivalent value has the Egyptian denomination of DnT,W). The Rw value is merely an average simplifying mutual comparison of various building components. That can be confusing some times. Two glass units can have the same Rw index while one of them performs well at low frequencies and bad at high ones, and the other one performs just the opposite.

C and Ctr factors: To slightly avoid this issue two spectrum adjustment factors: C and Ctr, have been added to modulate the Rw average. For sound waves featuring high frequencies, the factor C is added to the Rw value. For lower frequencies, factor Ctr needs to be added. The acoustic behaviour of a building component is hence defined by three numbers: Rw (C, Ctr). A building component with the values Rw (C, Ctr) = 40 (-1, -4) provides an average insulation performance of 40 dB. For higher pitched sounds the sound insulation is lessened by 1 dB (39 dB) and for lower pitched sound sources it is lessened by 4 dB (36 dB).

The table below, extracted from Saint Gobain, helps showing how these three numbers apply to different laminated units with acoustic interlayers.

Pink Noise: Expressed in dB(A), this is an assessment of the sound insulating properties of a building material over specified standard frequencies, which represent general activity noise when equal levels of power are applied at each frequency. So, in pink noise each octave carries an equal amount of noise power. Funnily: the name arises from the pink appearance of visible light with this power spectrum.

So far so good. Acoustic performance of glass should now be less of a dark matter for us. But this is not all: remember that detailing to achieve a proper air tightness between glass and frame will always be required! Loose gaskets can severely harm the best glass selection for acoustics...

You can find the full article published HERE.