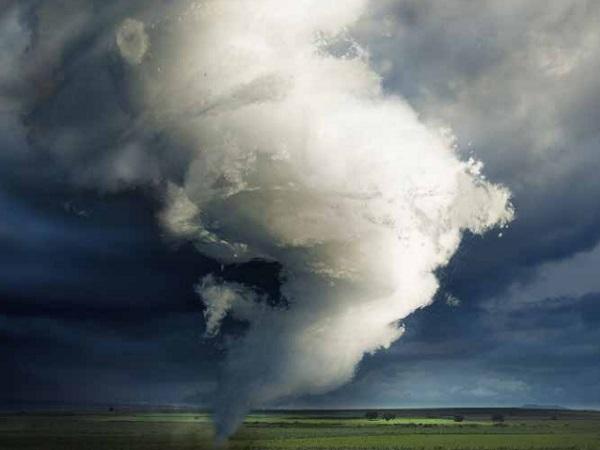 Tornadoes can be devastating, but with certified architectural glazing in place, huge amounts of damage can be mitigated leading to less costly clear ups.

Mother nature has an uncanny ability to quickly − and sometimes destructively − highlight flaws in building designs; from simple leaky roofs in a rain shower through to full building collapses bought about by severe weather events, such as tornadoes or hurricanes.

Designing for these major weather events is a balancing act. Architects and structural engineers have to keep one eye on the day-to-day use of the building and the other on the safety of the occupants should a major weather event occur.

This is especially important for high-occupancy buildings, such as schools and hospitals and those that are essential to emergency efforts in the event of a storm, such as police stations, fire stations and emergency-response centers.

The easy answer is to create a building akin to a totally sealed, in-house safe room, but this does nothing for aesthetics, “curb appeal” and the negative psychology of living and working in such an enclosed environment.

The obvious answer to increase the visual and psychological appeal of a building, both internally and externally, is to deploy glazing; but ordinary glazing is simply not up to the job.

Glazed openings are widely documented as significant weak points in buildings, especially in regards to tornadoes and it is only in recent years that glazing technology using laminated glass has been introduced that is capable of standing up to the rigors of even an EF-5 category tornado.

The Federal Emergency Management Agency (FEMA) in the US paints a sobering picture of what architects and glazing engineers are up against. “A tornado is a violently rotating column of air extending from a thunderstorm to the ground. The most violent tornadoes are capable of tremendous destruction, with wind speeds of 250 mph or more. Damage paths can be in excess of one mile wide and 50 miles long. In an average year, 800 tornadoes are reported nationwide. Every state is at some risk from this hazard.

Tornadoes are categorized according to their wind speeds. The six-level Enhanced Fujita (EF) scale assesses the estimated damage caused by three-second-gust wind speeds, with the degree of damage covering visible damage up to total destruction. It starts at EF-0 (65-85 mph/105-137 km/h winds) and goes up to EF-5 (>200 mph/322 km/h).

With these incredible wind speeds being the primary antagonist in most storm damage, it is not surprising that a great deal of research has gone into mitigating their direct and indirect negative effects, in some cases resulting in more robust buildings and glazing that are in line with FEMA and International Code Council (ICC) 500 guidelines.

Protection against tornadoes requires three primary considerations: a design capable of countering the effect of wind loading, suitable foundations or anchors and debris resistance − which is especially important in the case of glazing and curtain walls.

To assess its debris resistance, glazing intended to comply with tornadorelated standards is subjected to a missile test that is substantially higher than the missile test requirements associated with systems designed to resist wind-borne debris in a hurricane.

Windborne debris and the resultant penetration through walls and windows is just half the picture though, as once a building is open to the elements it can suffer from over or positive pressure due to the high winds and literally flex and inflate, causing massive damage, roof removal and eventual collapse.

In order to pass these tests, the glazing units require laminated glass bonded by stiff, tear resistant ionoplast interlayers. Originally developed 20 years ago for hurricane applications, following a number of severe storms in the Southeastern USA, SentryGlas® ionoplast interlayer from Kuraray has recently been tested to rigorous EF-scale testing and can now be specified for EF-5 performance in certain panel sizes.

According to Chris Giovannielli, product manager for Kawneer in North America: “We have partnered with Kuraray on a number of projects and initiatives, especially those around the deployment of glazing panels in areas where impacts and high wind pressures are an issue. The glass and the glazing must act as a single homogenous unit, with neither being the weak link in the construction. Following Hurricane Andrew, a Category 5 Atlantic hurricane that struck the Bahamas and Florida in mid-August 1992, building codes changed and we have since developed a range of products to meet the new standards.”

Tornadoes, although severe, do not deliver sustained high winds at the same level to that of hurricanes, but their effects can be just as catastrophic. Testing is very similar and it would make perfect sense that anything developed to resist the might of a hurricane, would be just as capable in the face of a tornado.

“Kuraray approached us a couple of years ago,” Giovannielli continues, “explaining it had a glass/interlayer make-up that could pass EF-4 tests and meets certain ICC-500 codes. We took the development further and after a sustained period of testing we were actually able to demonstrate certain sizes of glazed panels that were able to pass the demanding criteria laid down for EF-5 events.

As a result, we now have a glazing and curtain walling solution that can be used in multiple applications for vital infrastructure, civic and emergency-services buildings.

“Initial interest,” he explains, “has come for safe room and safe-zone applications, but we envision much wider deployment in schools, hospitals and other high-occupancy buildings where aesthetics and natural light still play an important role in occupant safety, well-being and comfort.

In recent years there have been many unfortunate headlines devoted to the destructive power of tornadoes, with Mercy Hospital in Joplin, Missouri being a graphic example. In 2011 the hospital suffered devastating damage from a tornado. The building was demolished in 2013, but eventually reopened on a new site in 2015.

Being in the heart of Tornado Alley meant that the rebuild project had to face the possibility of another extreme weather event. As a result, hospital administrators opted to incorporate glazed panels − comprising thicker than normal glass sandwiching SentryGlas® interlayers − which deliver incredible resistance to windbornedebris penetration and over-pressure scenarios.

Lessons from Joplin have been applied to other sites too, including the University of Iowa Stead Family Children’s Hospital, in Iowa City.

This hospital was in the planning stage when the Joplin tornado struck and, as a result of the destruction the planners saw in Joplin, a decision was made to install durable, stormresistant glass using SentryGlas® to prevent similar damage should a tornado strike Iowa City.

Like many hospitals, access to natural light via glazing was seen as being essential to welfare and to promote healing and with SentryGlas® interlayers there is no longer the need for a trade-off between storm resistance and views of the outside world.

Tornadoes, hurricanes and other tropical storms are always going to be unpredictable, but what is certain is the incredible amount of damage they cause every year across the globe. It would be impossible to equip and design every building to cater for what could be a once-in-a-decade event, but for new builds and rebuilds it is essential that the correct steps are taken, the best solutions used and occupancy safety is placed right at the forefront.

We started off discussing occupant well-being too, and this is just as important for hospitals, schools and buildings that are occupied 24 hours a day, which is where glazing can play a vital role. And to address these needs, architects and engineers now have a glazing solution that can be deployed in many different applications, safe in the knowledge that it has passed EF-5 tests and is supported by two of the industry’s largest suppliers.

Trosifol – World of Interlayers: Interview with Joe Khoury, founder of ALT Limited
Joe Khoury explains why his company advertises itself as the leading curtain wall consultant in Asia.
Register now for the Trosifol® web seminar „Designing hurricane resistant glazing systems“
The presentation will review codes and standards as well as key factors when designing hurricane glazing systems.
POLFLAM BR glass in fire-rated frameless glazed partitions
The glass panes are joined with fireproof silicone sealants and the resulting joints are only 2 mm wide. The pane edges are aesthetically finished with a strip of ceramic paint of appropriate width in any RAL colour.
Guardian Glass Project: Shift
Guardian SunGuard® SuperNeutral (SN) 62/34 coated solar control glass was chosen for the glazed elements of the façade.
STAPHIRE Ultra-Clear glass provides pristine ocean views at Asbury Ocean Club
Luxury hotel and condo’s floor-to-ceiling windows and balconies glazed with premium low-iron glass.
FGIA Updates Test Method for Vertical Fenestration Installation Procedures
The Fenestration and Glazing Industry Alliance (FGIA) has updated a test method evaluating the performance and durability of the integration of a fenestration product with a building envelope.