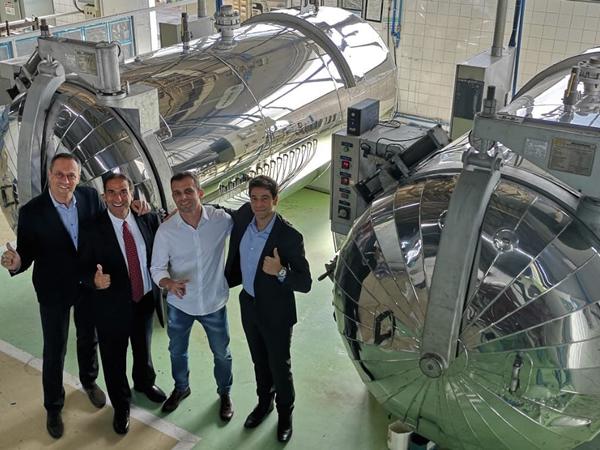 Research Frontiers Inc. and Israel-based material science company Gauzy Ltd. joined SER Company at a ceremony today in São Paulo, Brazil to commemorate SER becoming a licensee of Research Frontiers to produce SPD-SmartGlass for the Brazilian market with SPD light-control film manufactured by Gauzy. The parties also announced today that SER has placed one of the largest known initial orders for SPD light-control film to date. All SPD film used to create LCG® (light control glass) for SER will be produced by Gauzy in Germany with monthly shipments beginning next month.

Fabio Santos, President and CEO of SER, noted: “SER has brought many high-quality products to our customers in Brazil and Latin America, especially in the aftermarket for armored glass for automotive applications, and has now entered the architectural market. We specialize in high-quality, high-end products for the most discerning customers. SPD-SmartGlass offers the innovation and performance that our customers demand, and can increase the functionality of armored glass by reducing noise and temperatures inside the vehicle by up to 10ºC, and increasing both comfort and security. Demand is quite high and we currently have a six month backlog of orders for our armored glass and we will be incorporating the SPD functionality right away in the glass we are producing for our best customers. We also plan to quickly expand into other markets and product areas for SPD-SmartGlass.”

Gauzy announced in February that it was building a new state-of-the-art factory line in Stuttgart Germany to produce SPD light-control film for the entire industry.  This factory has the capacity to produce 1 million square meters of SPD film annually. SER is one of the first customers to receive Gauzy’s German-made SPD film, and to become an SPD Certified Partner of Gauzy’s, as part of its Partnership Program for glass fabricators worldwide.

Eyal Peso, President and CEO of Gauzy Ltd. noted: “Our core business philosophy is to work with the finest glass fabricators in the world, with a commitment to providing them with the best materials and training. SER successfully completed our robust training program and became a certified laminator for our high-performing films. We are proud to align with this industry leader, and see Gauzy’s LCG® (Light Control Glass) technology integrated into SER’s expanding product line. We look forward to many successes between SER, Gauzy, and Research Frontiers

Joseph M. Harary, President and CEO of Research Frontiers added: “We are quite enthusiastic about the high sales volumes from this relationship between SER and Gauzy, as well as the focused use of SPD-SmartGlass in the Brazilian market. Armored glass is prevalent here in Brazil, and the use of SPD-SmartGlass technology will enhance the security of vehicles and their occupants by adding tinting that blocks over 99.5% of light instantly and on demand, reduces heat, and provides unprecedented control, and better acoustics and privacy inside the vehicle.”

Research Frontiers patented SPD-SmartGlass technology is the same best-selling smart window technology that can be found on various car models from Daimler, McLaren Automotive, and other auto makers.

The MAGIC SKY CONTROL feature, which is now in use on tens of thousands of Mercedes-Benz SLs, SLC/SLKs, Maybach and S-Class models around the world, and more recently on four announced McLaren models, uses patented SPD-SmartGlass technology developed by Research Frontiers to turn the roof transparent by electrically aligning tiny particles in a thin film within the glass.

Gauzy is currently focused on LCG® (Light Control Glass) technology, including Liquid Crystal formulations and SPD-SmartGlass emulsions. The company has a dedicated R&D team that focuses on each technology, multiple laboratories, and two on-site production lines with custom machinery for high quality products with on time delivery in Tel Aviv, Israel and Germany. 2023 FGIA Conference to Focus on Advances in Glazing, Windows, and Glass Safety
Don't miss out: Register now for the FGIA Annual Conference to learn about quality systems, innovation, and more!
NGA Presents 2022 Annual Report
The report showcases the key accomplishments and objectives that NGA has achieved over the past year.
Join Vitro for four live Continuing Education webinars this February
Earn AIA LU/HSW Credits with Vitro CE Webinars.
Architecture billings continue to decline
Demand for design services from U.S. architecture firms continued to contract in December, according to a new report from the American Institute of Architects (AIA).
University of Arizona's HSIB Showcases Solarban® 90 Starphire® Glass
Featuring an impressive terracotta design for shading, Solarban® 90 Starphire® glass curtainwall, and expansive glazed windows, the HSIB is designed to be both aesthetically pleasing and high-performing.
Final Schedule Announced for 2023 FGIA Annual Conference
The event will include a variety of hands-on experiences, from an optional tour of a seismic shake test site, to a hardware demonstration, and the Annual Awards Banquet.