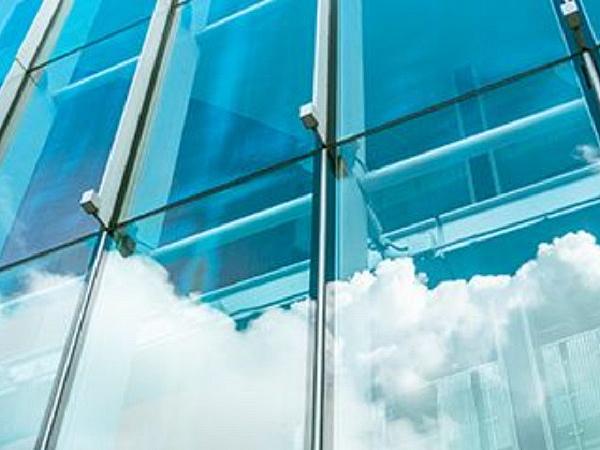 The World Health Organization (WHO) has identified noise as one of the major pollutants in our environment and society.  The population density is increasing, buildings are being built closer and higher and we are spending more time indoors than ever before.

At the same time , we are delving into health and wellness awareness with gusto and zeal.  We demand a connection with the outdoors, we crave natural daylight to glide from the glassy plane of our windows deep into our offices, conference rooms, schools and homes.  We seek the most efficient materials for our structures with the least waste and environmental impact.  We strive for healthy comfort within a circular economy.

Glass is a magical material.  Its transparency allows us a protected connection with the outdoors, invites light through it, is strong, durable and recyclable.  Designs call for large expanses of glass because of these reasons.  In the past, this design trend would wrestle with a downfall: it would be hampered by an assault of noise.   Noise and natural light come through the glazing like a couple of kids joined together in a three-legged race.  The good and the bad, the beauty and the beast.

Well, even the beast can be tamed with the right spell!   Our noise beast has met its match with Saflex® Acoustic (Q series) PVB, a tri-layer interlayer used in the production of laminated glass.

For years, acousticians and technical liaisons would craft glazing configurations, swapping and switching glass thicknesses and increasing air spaces to get the level of acoustic performance demanded by the applications and their clients. Many buildings, especially multiuse buildings and those around airports, train tracks, or heavy traffic, would require insulating glass configurations with abnormally large air spaces to get close to the acoustic damping needed.

Saflex Acoustic interlayer can reduce about half the noise coming through

The damping ability of Saflex Acoustic also allows those abnormally large air spaces to be reduced significantly, thus reducing the overall thickness of the glazing. An example of thickness reduction can be seen when comparing two configurations having the same single number acoustic ratings.

For this comparison, we will look at two configurations with a sound transmission class (STC) or weighted reduction (Rw) value of 44 and an outdoor-to-indoor transmission class (OITC) value of 35–36. Both configurations have an outboard (O/B) glass of 6 mm, and the interlayer thickness for the laminates is 0.76 mm. The first configuration uses conventional Saflex Clear interlayer, has a large air gap of 114 mm, and uses two pieces of 3-mm glass on the inboard-facing laminate.

This overall glazing thickness reduction afforded by the use of Saflex Acoustic versus conventional PVB has other benefits as well. The frame design may be less complex as it allows for normal glazing pockets to be used and the potential reduction in the robustness of the frame material itself.

The savings continue when one considers boxing, storage and transportation of the thinner configurations take up less space allowing more units per crate, more crates per truck, less footprint in the warehouse and even potentially requiring less human or crane power for installation.

The use of Saflex Acoustic PVB interlayer also brings many benefits from acoustic to UV screening.  Let this magical interlayer cast its spell on the noise beast and cut things down to the right size for your laminated glass project.

Probabilistic Study of Wind-temperature Interaction
An Initial Study Towards Optimized Structural Assessment of Glass Components
Glass Fins in Architecture
For years and years research, development and discussions have been made on the safety of glass structures.
Designing Impact Glazing to Meet Tornado Performance Standards
Building code requirements for wind-borne debris protection have been in existence since the mid- 1990s, and as a result, many glazing systems have been tested and certified to these performance requirements.
Comparative study of laminated glass fins using full-scale testing, finite element modeling, and buckling formulas
For nearly 50 years, glass has been used as structural elements in glass fin applications. These applications include interior and exterior projects, supporting facades, canopies, storefronts, curtain walls and skylights.
Physical properties of SentryGlas® and Butacite®
Originally developed for glazing in hurricane zones, SentryGlas® ionoplast interlayers are significantly stiffer than standard PVBs such as Butacite®.
Post Breakage Strength Testing for Overhead Laminated Glass Applications
Post breakage strength of glass is still an unknown area as analytical models for this are inconclusive so far and thus destructive testing is the only reliable solution.
Controlling Glass Furnace Exhaust Gases with Ceramic Catalytic Filters
One-Step Multi-Air Pollutant Control Solution.
Ongoing Research into the Failure of Glass at High Strain-Rates
The present paper presents an ongoing research project considering the failure of glass at high strain-rates. It provides a brief review of existing studies showing a strength increase with loading rates relevant for e.g. blast loads.
Combined Voronoi-FDEM Approach for Modelling Post-Fracture Response of Laminated Tempered Glass
In this work, a combined Voronoi and finite-discrete element method (FDEM) approach for reconstructing the post-fracture model of laminated glass (LG) was proposed.
Application of a Mobile Measuring Device for the Planar Evaluation of the Current In-Situ Stress Condition in Glass
The load-bearing capacity of glass as a structural material as well as sustainability and resistance of a built-in glass against appearing loads and forces is assuming an ever-greater importance.
Effects of Humidity and the Presence of Moisture at the Bond-line on the Interfacial Separation of Laminated Glass for Flat Glass Re-use
This study forms part of a wider research programme that aims to better address the end-of-life challenges and opportunities in façade design for re-use.
Three-Point Bending Test of Laminated Glass With PVB and EVA Interlayers at Elevated Temperature
This paper presents the experimental results of a three-point bending test conducted on laminated glass at elevated temperature in an environmental chamber.

R.C.N. Solutions: not only digital

For a resilient, innovative, sustainable and digital energy-intensive industries ecosystem