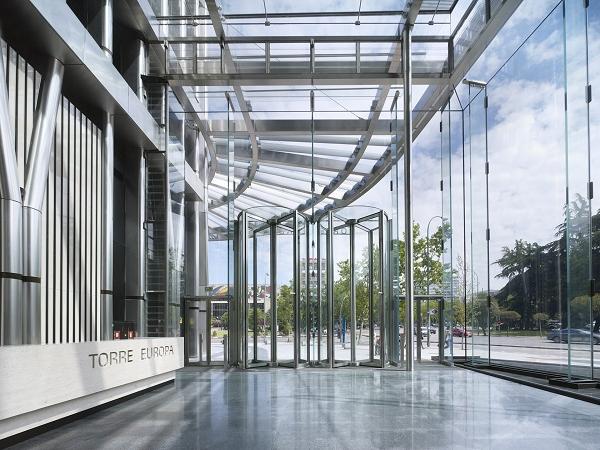 New lobby of the Torre Europa: custom-made on the limit of possibility.

The Torre Europa in Madrid reaches an impressive 121 metres towards the sky. The 33-year-old building in the Spanish capital has just been extensively renovated and modernized: at its foot a new glass cube made from 55 sedak glass elements forms the prestigious entrance to the office tower.

The 10 x 10 x 12 metre cube nestles against the building and its two supporting glass façades offer an unobstructed view of the time-honoured Santiago Bernabeu Stadium located diagonally opposite and the central north-south axis of the city.

At the same time, the transparent lobby provides the colossus, which appears inaccessible from a distance, with an inviting, open character once you get close to it. Stylistically, the up to ten metre high glass elements from sedak (Gersthofen) reflect the imposing nature of the tower.

An unusual task for the large-format glass specialists: the supporting glass beams in the roof of the cube achieve a width-to-length ratio of as much as 1:84.

The iconic Torre Europa has towered above the centre of Madrid since 1985. The building, which for a short time was the highest in the city, is reminiscent of the World Trade Center with its small windows and ribbed façade. The stern architecture of the office tower has now been softened by the new lobby on the northern side of the building.

The architects from Callison RTKL formulated a spacious cube, which leans against the Torre Europa and opens it up invitingly with a full-glass façade towards the boulevard. Its constructional framework is formed by sedak glass fins.

The glass façade, made from 3.0 by almost 10 metre panels, is supported by 60 centimetre narrow fins. The fine supports maintain maximum transparency of the cube. Into each of these the company from Gersthofen laminated up to eight titanium fittings as attachment points, which were provided by the client Bellapart. In order to enable the non right angled floor plan, sedak realized edge mitres of up to 39 degrees.

The fins connect the glass façade with the slender glass and steel roof construction. This uses glass beams with exceptional ratios between width and length that exceed the usual ratio of up to 1:20 by far: the beams have a length of almost 12 metres but narrow down from 35 centimetres at the widest point to just 15 centimetres – a width-to-length ratio of 1:84!

Despite this extreme relationship, sedak guarantees an enduring optical quality, also for multiple laminates, as well as the dimensional accuracy of the offset edges and the straightness of the glass elements. The beams fulfil the highest requirements of transparent architecture.

The glass roof enables a view right up to the top of what is still the seventh highest building in Madrid – it is partly supported by the façade fins. The new Entrée, which opens to the north, does not need any additional shading facilities and can therefore realize its full effect.

The eight insulation glass panes for the roof of the cube were decoratively enhanced by sedak with a fine ceramic stripe print. In addition, a solar control coating was applied. The horizontal glass elements measure up to twelve metres and flow seamlessly into the overhanging roof construction. This swings around the building, underlining the filigree cube construction like the swoop of a fountain pen.

Glass façade
Glass elements with a maximum height of 9.7m with laminated-in titanium fittings (provided by Bellapart)
Supporting glass fins with dimensions of up to 9.7m x 0.6m

Diamon-Fusion® Windshield Coating Benefits
Protect your automotive windshield with the best protective glass coating in the industry.
FACE 1 Tecglass Technology at Project 923 Quentin Building – New York
JETVER BASE inks range were developed by Tecglass for the world of architecture, providing excellent performance in terms of chemical resistance to the effects of weather and superior durability over time.
Kuraray will participate in glasstec 2022
Finally, "Glasstec" returns to Düsseldorf, and Kuraray will be there to showcase all of the latest products and services from SentryGlas® and Trosifol®.
Intersolar Europe 2022: Great Success at Messe München
The date for the next exhibition has already been set: Intersolar Europe 2023 will take place from June 14– 16 at Messe München.
Şişecam attended the 4th Innovative Glazing Global Summit
Şişecam participated in the 4th Innovative Glazing Global Virtual Summit addressing the latest trends in the glass industry.
Saudi Build 2022
The 32nd International Trade Exhibition for Construction Materials, Building & Environmental Technology, will take place from 14-17 November 2022 at Riyadh International Convention & Exhibition Center. 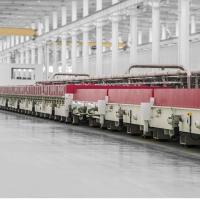