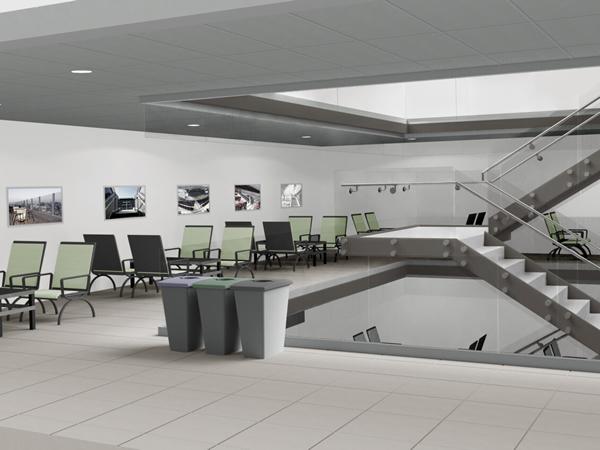 In the event of a fire, smoke – the largest cause of fire-related deaths – can travel just as fast as flames, posing major safety risks to a building and its occupants. To provide optimal protection against the spread and impact of smoke, Trex Commercial Products, a leading national provider of architectural railing systems, has introduced a new Smoke Baffle System engineered to serve the safety and aesthetic needs of today’s commercial settings.

According to the U.S. Fire Administration, more than 100,000 commercial building fires occur each year in the U.S., resulting in thousands of injuries and deaths, along with over $2 billion in damages*. If not properly contained, smoke can lead to reduced visibility, making it difficult for building occupants to identify and follow exit paths. In addition to health and fatality risks, smoke can also cause serious and costly property damage.

A smoke baffle, also known as a “draft curtain,” corrals heat and smoke into curtained areas to prevent the spread and to help facilitate safe building evacuation. A study published in the Journal of Fire Protection Engineering also found that a draft curtain can reduce sprinkler activation time by up to 15%**, allowing for faster sprinkler activation in the event of a fire.

“A smoke control system is critical for the safety of any commercial building to enhance safe exit routes, minimize property damage and save lives,” said Laura Rygielski Preston, president of Trex Commercial Products. “Staying true to our commitment to safety and style, Trex Commercial Products’ new Smoke Baffle System offers the ultimate marriage of form and function and ensures the utmost protection against the spread of smoke.”

Available in clear glass or with frosted or digitally printed finishes, this sleek smoke screen is customizable and can be mounted below or flush with a finished ceiling, allowing seamless integration in mezzanine spaces, such as stairways and other open concept areas, to prevent smoke from rising to upper levels.

May 18 webinar to ease compliance with quality management for certification
The Fenestration and Glazing Industry Alliance (FGIA) will host a webinar entitled "Quality Management for Certification: Compliance Made Easier" on Tues., May 18 at 11:30 a.m. Eastern.
Adelio Lattuada at GlassBuild America 2021
Adelio Lattuada will exhibit @ booth #1547 at the 2021 edition of GlassBuild America.
Cool as ice thanks to SentryGlas®
New ribbon-wrapped Olympic speed skating arena is cool as ice thanks to SentryGlas® ionoplast interlayer from Trosifol
Now Playing: BEC Presents
Just a few days left! Short, informative, smart episodes of big time industry importance with BEC PRESENTS- See the descriptions below then click and check them out now!
Vanceva PVB Interlayers at Kaleidoscope Kindergarten in Tianshui
SAKO Architects used colorful glass and the sun’s movement to create a life-size kaleidoscope inside this newly built kindergarten in Tianshui City, China.
For vibrant color - or no color at all - Starphire® glass has no equal
With Starphire® glass, you can express colors and patterns in their purest forms and evoke luxury anywhere from decorative murals to doors.