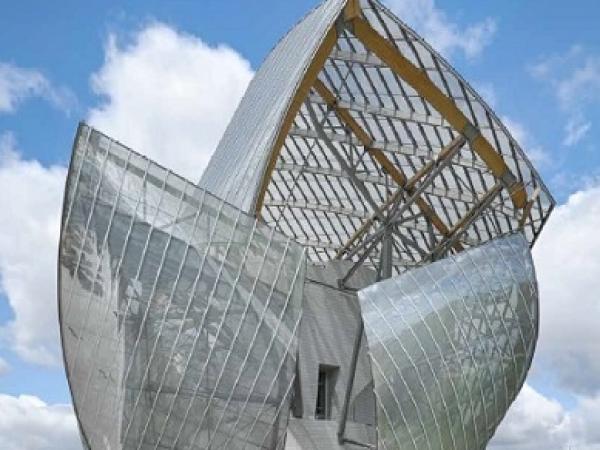 SentryGlas® ionoplast interlayer and Dow Corning Silicone has played a critical role in one of Europe’s most striking architectural constructions.

The Fondation Louis Vuitton, situated in the Jardin d'Acclimatation on the northern edge of the Bois de Boulogne in Paris, deploys arguably one of the most fascinating glass roofs ever seen, with 12 unique, curved glass sails emerging above the treeline like a sailboat.

Built at the behest of Bernard Arnault, a French businessman, art collector and chairman and Chief Executive Officer of LVMH, the building expands outwards from a central area into various galleries, referred to as chapels, with the whole structure covered by sails of white glass, inspired by the glass architecture of the end of the 19th century.

Designed by American architect Frank Gehry, the LVMH group created the Fondation Louis Vuitton to promote and support contemporary artistic creation for a wide French and international audience. It offers some 7,000 m2 of usable floor space, comprising 3,850 m2 of museum space, 11 exhibition galleries and a 360 to 1,000 seat auditorium.

In total there is over 13,300 m2 of glass roof area, comprising 3,600 unique panels, each exhibiting different bend radii (from almost flat to 3 m) and different bending orientation – from the primary perpendicular axes – of -90 to 90°. Almost all of them presented a fascinating challenge to the multifaceted architectural and engineering teams tasked with designing, fabricating, testing, validating and installing them.

The Fondation Louis Vuitton deploys arguably one of the most fascinating glass roofs ever seen.

Initial development work centred around the feasibility of actually constructing the 12 unique sails coupled with investigations into the physical formulation and appearance of the glass panels, all of which had to offer long-term durability for what is a project that relies a great deal on its striking aesthetics.

Many factors were considered in the glass formulation, including the transparency/translucency, the colour, the coating and of course the all-important interlayer. Given the complexity of the sails and their multiple facets, all of which required unique geometries, glazing panels made using SentryGlas® were the obvious solution.

The major challenge was the creation of the unique geometries for each glass panel. Hot bent panels, fabricated using moulding were immediately dismissed as it would have meant an individual mould for each panel and this would have been prohibitively expensive.

The cooling process would also have annealed the glass making it weaker than tempered glass and prone to breakage from thermal shock. Cold bending proffered a similar number of disadvantages, primarily due to the high degree of curvature demanded by some of the panels. The solution came from the latest glass-bending machines that can bend with various radii and temper glass panels without the use of moulds.

Nevertheless, a strong limitation of these machines is that they can only produce circular cylindrical shapes for the panels; a special geometrical optimisation has been therefore developed to best fit the cylindrical panels to the original architectural shape. Eventually, Sunglass, the contractor that provided the glass panels for the building, was able to modify one of its bending ovens so that it could produce glass panels with two different bending radii. This additional degree of freedom allowed a better matching of the original design shape.

The panels comprise 6 mm (0.24 inch) tempered glass, a 1.52 mm (0.06 inch) SentryGlas® interlayer and 8 mm (0.31 inch) tempered glass, with the 6 mm panel also incorporating a reflective coating and a 50% opacity white frit on its internal face. This optimum glass formulation was complemented by the specification of Dow Corning® 993 Silicone Structural Glazing Sealant which provides a strong high performing bond between glass and frame and enables an aesthetically pleasing pure glass sail.

To seal the exceptionally wide expansion joints between the complex array of bent glass units, Dow Corning® 791 Weatherproofing Silicone was specified. Both products show excellent chemical compatibility to the SentryGlas® interlayer which is an important aspect as there is a direct contact.

Multiple tests were undertaken to assess the effectiveness and longevity of interlayer/sealant combinations, in order to give architects and laminators an idea of the best combination for specific applications. No less than 16 one- and two-part sealants from Dow Corning have been tested, along with many others from seven other major manufacturers. And it is these test results give the engineers the facts they need upon which to base their laminate/ sealant-combination decisions.

Frit compatibility is also vital to the performance of the glass make up. When a fritted surface comes into contact with the glass laminate interlayer, it is important to verify the lasting compatibility between the frit and the interlayer. These combinations are also tested in terms of visual defects and adhesion to ensure that no measurable differences are found.

It was the incorporation of SentryGlas® that allowed the panels to be fabricated to the desired thickness and, due to their unique construction the façade builder and glass manufacturer performed all the necessary French certifications for this particular panel composition. Although mandated by local building legislation, SentryGlas® has been proven time and again in many applications to offer enhanced safety for overhead glazing and skylights.

“Our main goal for the glass mechanical performance was to maximize its resistance as well as its flexibility, in order to limit the stress induced by the flexibility of the supports or the use of cold bending for shape adaptation,” explains Jacques Raynaud from RFR/TESS, temporary partnership responsible for the conception engineering.

“The SentryGlas® interlayer helped to achieve a good result as it allowed a reduction in the thickness of the glass panels (and therefore their inertia) thanks to its good capacity of shear transfer between glasses. It also allowed us to use fully tempered glass for both sheets, thanks to its very good post breakage resistance.”

The building, which started construction in 2008, was completed in October 2014, with the all-important glass sails being added in 2012.

The teams participating in its construction have been awarded several architectural awards, both in France and in the U.S. According to Bernard Arnault: “We wanted to present Paris with an extraordinary space for art and culture, and demonstrate daring and emotion by entrusting Frank Gehry with the construction of an iconic building for the 21st century.” With SentryGlas®, advanced engineering and an incredible vision, this extraordinary space has certainly been achieved.

600450
glasslaminatingsolutions.kuraray.com
Fondation Louis Vuitton deploys SentryGlas® and Dow Corning Silicone to float like a sailboat above the treeline of the Bois de Boulogne in Paris glassonweb.com

Application of a Mobile Measuring Device for the Planar Evaluation of the Current In-Situ Stress Condition in Glass
The load-bearing capacity of glass as a structural material as well as sustainability and resistance of a built-in glass against appearing loads and forces is assuming an ever-greater importance.
Effects of Humidity and the Presence of Moisture at the Bond-line on the Interfacial Separation of Laminated Glass for Flat Glass Re-use
This study forms part of a wider research programme that aims to better address the end-of-life challenges and opportunities in façade design for re-use.
Three-Point Bending Test of Laminated Glass With PVB and EVA Interlayers at Elevated Temperature
This paper presents the experimental results of a three-point bending test conducted on laminated glass at elevated temperature in an environmental chamber.
Determination and Verification of PVB Interlayer Modulus Properties
Dynamic mechanical analysis (DMA) experiments were carried out on three different Saflex® interlayers from commercial production, all at a nominal thickness of 0.76 mm.
Experimental Study on Thermoplastic Interlayers in Laminated Glass Using Fiber Optic Strain Sensors
The study describes the results of the principal applicability of fiber optic strain sensors to evaluate the structural behaviour of laminated glass and provides the basis to define a model for the material characteristics of viscoelastic interlayers.
Numerical and Experimental Investigations on the Inherent Stress State of Cold-bent Glass
In today’s architecture the bending of glass plays an important role in achieving free forms in modern façades.