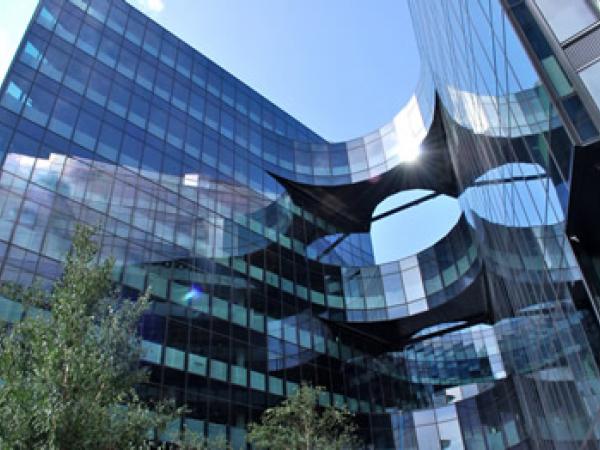 London: the place where the Queen lives, where bank towers rise above the city, where theatres and art galleries inspire people from all over the world – a fascinating city of architectural contrasts. The historic quarter of Southwark is now the location of Great Britain's first office building that has achieved the internationally renowned Breeam "Outstanding" rating for particularly sustainable technical building design.

The ten-storey "7 More London" was planned by the architect group "Foster & Partners". The utilization of renewable energies, modern technical facilities and the energetically optimized solar control glass façade keep CO2 emissions low: they are 74 percent below the CO2 limit specified in 2006. ipasol neutral solar control glass from Interpane reduces the rise in office temperatures in the summer and thus cuts the air-conditioning costs.

Immediately next to Tower Bridge, the glass architecture of the project "More London" rises into the sky. The latest building "7 More London" – the new headquarters of PricewaterhouseCoopers – is located in the historic quarter of Southwark, south of the River Thames. Having been a dubious entertainments district in the middle ages and the site of Shakespeare's theatre, it has developed into an economically important centre of the mega-city over the course of the centuries.

Here, service providers and lawyers reside, and here is the location of the Tate Modern gallery – the world's largest museum of modern art – and of London City Hall. The highly diverse quarter with around 250,000 residents stands for progress, integrity and economic upturn without losing its close ties to the art of theatre. Neighbouring centuries-old historic buildings, modern architecture fits in harmoniously with the cityscape without destroying the quarter's flair – a mixture that is typical of London.

The "More London" area has already been under development since 2003. Due to their glass façades, the office buildings have an open, transparent and inviting appearance. "7 More London" completes the project.

At more than 60,000 square metres, the building's floor space has the size of four football fields. It is convincing in terms of architecture as well as technology due to its innovative shape and the consequent utilization of ecological and energy-saving technologies and materials – for example the 16,500 square metre solar control glass façade using ipasol neutral 50/27 from Interpane.

The multi-angled building encloses a polygonal inner courtyard, and the wings of the building are interconnected by curved sky bridges that are several storeys high and concave on both sides. This very noticeable building opens toward the River Thames. Passers-by strolling along the riverbank can see the building's highly diverse faces: the smooth, flowing façade of the internal atrium is simple and unobtrusive.

The so-called "zig-zag" façade around the building is more distinct in appearance because the entire surface is meandering. The metal construction works of the project with its ambitious building physics were conducted by seele from Gersthofen, Germany.

In terms of technology, the solar control glazing plays in the top league, too: ipasol neutral 50/27 reduces the rise in office temperatures at times of intense solar irradiation. At the same time, it provides a neutral view to the outside and abundant daylight inside (TL = 50 percent); electrical lighting needs to be switched on only at a fairly late hour. The energetic characteristics of the glass help keep the building's operating costs low.

Due to the low total solar energy transmittance (solar factor = 27 percent according to EN 410), the rooms stay comfortably cool even in midsummer, and air-conditioning costs are substantially reduced. In winter, the Ug value of 1.1 W/m²K (according to EN 673) provides effective insulation. As laminated safety glass, the glazing also meets high safety standards. On particularly hot summer days, additional protection from the sun is provided by external aluminium slats.

7 More London is the first building in London to achieve the Breeam "Outstanding" rating. The Breeam method was introduced in 1990 for assessing the sustainability of new office buildings in Great Britain. It analyses aspects such as energy and resource input, room air quality and the execution and organization of the construction works.

In order to get the much sought-after rating, the building has to meet strict standards and score at least 85 out of 100 points in the evaluation. These points are awarded in various fields, including CO2 emissions and energy demand, recycling of materials, management, health and wellbeing, transport, water and land use.

[10-07_Innenhof]
The polygonal inner courtyard is enclosed by the building on all sides.
Photo: seele GmbH & Co.KG

[10-07_Zig-Zag-Fassade]
The zig-zag façade is divided into small sections and has an impressive appearance with its continuously meandering shape.
Photo: seele GmbH & Co.KG

Glasstec 2022
Check out the latest updates from glasstec
MICA (Monitoring Internal Comfort Application)
A new BIM tool processing IEQ data input for building management and energetic optimizations
Comparison of Behaviour of Laminated Banister Panels with Embedded Connections
Within this research, two sets of real-scale laminated banister panels with the embedded connection were tested.
Examination of the Load-Bearing Behavior of a Bonded Edge Seal for Fluid-Filled Insulating Glass Units
This paper presents a study on the development of a bonded edge seal for fluid-filled insulating glass units.
Sound Insulation of Façade Element with Triple IGU
In this research, the structural sealed façade structure with triple IGU was investigated and the effect of the thickness of ordinary and laminated glasses.
Case Studies on the Thermally Induced Stresses in Insulating Glass Units via Numerical Calculation
In the structural design of facade glazing, various types of loads such as dead weight, wind and climatic loads must be taken into account. In practice, however, there are many cases of damage that can be attributed to direct solar radiation.