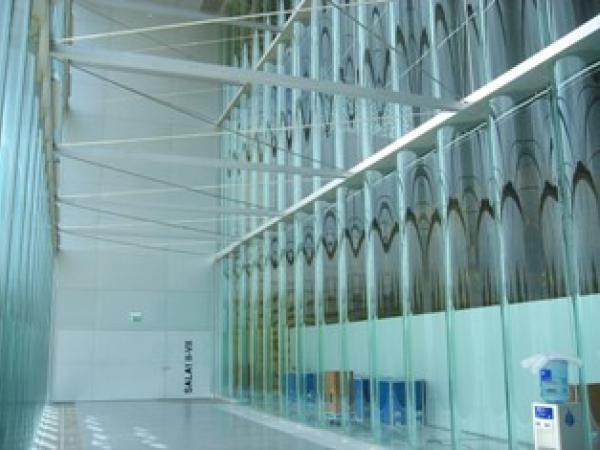 Corrugated glass is flat glass bended in the furnace into a certain shape.

Fig.1: the effect of corrugate-ness on the deformation, from 750 mm (blue, flat) to 5 mm (yellow, corrugated).

It is a well known fact that if you take a flat piece of paper in our hands it is weak, and slack. However if you fold this piece of paper a few times the structural behavior changes from weak to strong and form slack to stiff. Luckily the glass manufacturing films are more and more capable to create folded, or better, corrugated glass. Therefore we have started to create glass structures is corrugated glass. One well known building has incorporated corrugated glass in their facades. It is the Casa da Musica in Porto (P), (architect OMA). In this building the corrugated glass panels is used to create, with a relatively thin sheet of glass an all glass façade without hardly any steel components.

In 1997 the Office for Metropolitan Architecture (OMA) headed by the Dutch architect Rem Koolhaas won a competition for the Cultural Centre of Porto in Portugal. They had designed a rather surprisingly shaped box of white concrete that contains various cultural activities.  In the white concrete box, large, very large openings were made to let the daylight enter the building and to present to the visitors of the building astonishing view over the town of Porto, located on the slopes of the river Douro.

ABT/Rob Nijsse was asked to make a proposal for the façade of the large windows, the biggest one measures 25 by 12 meter, using as much glass as possible and, preferably, no steel. We tried all kind of slender cable stayed structures but these remained unacceptable for the architect. Quote; “I don’t want all that steel spaghetti around the glass”. As we tried to figure our way out of this “mission impossible” I happened upon a publication of the Spanish firm Cricursa that made a large corrugated panel wall for the interior of a shop. Putting one and one together I made a proposal for a large window made out of large corrugated glass panels stacked on top of each other.

Fig.3: the view through the corrugated glass panels.

Due to then valid production restrictions we could make 4,5 meter high corrugated glass panels, so the total height of 12 meter was divided in three parts which luckily enough fitted in with the position of the floors of the foyer/circulation space that sometimes passes through the voids. The architects immediately embraced the proposal.

As I later learned especially the contrast between the flat, smooth surface of the white concrete and the corrugated, shining, brilliant surface of the glass façade was appealing. The structural effect of a corrugated panel is clear; it can take up much more wind load then a flat one with the same thickness. Therefore no steel supports in the shape of cables, columns and beams are necessary for the glass. On an overall level support for the components of the façade is still needed.  We combined these with with the panels of the floor that crossed the voids behind the façade.

Here were placed horizontal steel trusses made as slender as possible; so crossed diagonals in order to have always one on tensile stress. At places were there is no floor these diagonals simply hang in the air.

The architect wanted to have daylight in the big Auditorium, a feature rarely seen in theatres . So we had to make two walls of corrugated glass, one wall on the outside, to take up the wind load and to provide water tightness and insulation and one wall in the inside dividing the theatre from the foyer/circulation area. It might be suspected that sound quality inside the theatre was affected by the presence of glass, a hard reflecting material.

Study by acoustical adviser learned that due to the corrugated surface a very effective dispersion of the sound was obtained and the effect of double glass wall resulting in a more then enough sound level reduction from inside to outside and the other way around.

Now that it is possible to make façade sout of corrugated glass, even in laminated glass and insulated glass units, we may think about another possible use in the construction of buildings.

Why not? If the improved statical behaviour (compared to flat glass panels) works for the wind load: why not for the dead load or the snowload when it is placed horizontally, as a roof? The transparency combined with the natural waterthighness of glass makes it a very interesting roofing material. Of course sunshading in an important issue that has to be taken care of.

The Museum at the Stream (MAS) in Antwerp (B), realised in 2010, is another example.

You can find it on the “Corrugated glass facades” article entirely published in the 2011 Glass Performance Days, Conference Proceedings Book, p. 394 Reducing Carbon Footprint of Laminated Glass Through the Use of Structural Interlayers
Structural interlayers in laminated glass have allowed engineers and specifiers to extend and improve the use of glazing solutions in the construction industry.
Overview of dynamic test methods for examining the glass window resistance
In the article, the focus is on an overview of several norms, standards, and research that address the issue of resilience of window systems.
Curtain of Glass – Textured by Stone
The new World Trade Center site was rebuilt after 9/11 comprising seven mayor skyscrapers around the memorial site and the 9/11 museum.
Numerical Analysis of TGU Windows Under Blast – GLASS-SHARD Outlook
This paper presents some of major outcomes of Finite Element (FE) numerical methods and simulations that have been explored in the framework of the GLASS-SHARD research project for glass windows and facades under explosion or soft-body impact.
MICA (Monitoring Internal Comfort Application)
A new BIM tool processing IEQ data input for building management and energetic optimizations
Comparison of Behaviour of Laminated Banister Panels with Embedded Connections
Within this research, two sets of real-scale laminated banister panels with the embedded connection were tested.