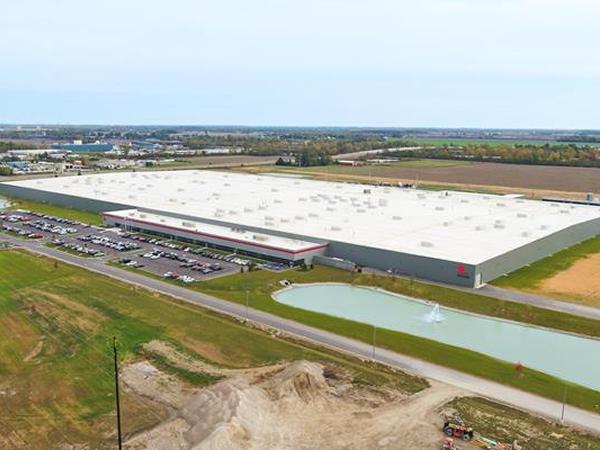 First Solar’s expanded manufacturing footprint in the United States, which represents over $1 billion in cumulative investment and directly created approximately 500 new jobs, makes it the largest solar manufacturer in America and the Western Hemisphere. The investment includes a new $265 million TCO (transparent conductive oxide) coated glass factory being built by the NSG Group in Troy Township, Ohio, its first new float glass line in the country since 1980.

“Eighteen months ago, we announced that we would expand our manufacturing footprint in the United States in response to demand. We have delivered,” said Mark Widmar, Chief Executive Officer, First Solar. “The fact that we were able to transform a greenfield site into a high tech manufacturing facility in that time, and on time, speaks volumes about not just the scalability of our technology, and our ability to deliver on our commitments, but also the relentless energy of our people, our towering strength.”

“Our Lake Township facility is a marvel of modern manufacturing, a factory of the future, operational today. Its levels of automation, digitalization, machine learning, and artificial intelligence demonstrate that the ambitions of Industry 4.0 are not out of reach for the PV manufacturing industry,” said Tymen de Jong, Chief Operating Officer, First Solar. “We’re incredibly proud of what we have achieved, and we are proud to have achieved it in Northwestern Ohio, the technological home of American solar.”

First Solar is also celebrating two decades since its founding in 1999, and 25GWDC of PV modules shipped, making it the only American solar module manufacturing company to achieve this milestone. First Solar also operates manufacturing facilities in Vietnam and Malaysia with a current global annualized manufacturing capacity of 6.7GWDC.

Şişecam 37th International Glass Conference
Şişecam 37th International Glass Conference will provide a fantastic opportunity for all participants to discuss and shape the future of glass together and to greet “International Year of Glass 2022”.
GlassBuild America 2022 Registration is Open
The largest glass and fenestration industry trade show in the Western Hemisphere returns to Las Vegas this fall
New! GlassBuild Tailgate Party Added to the Schedule
Brand new for 2022, the GlassBuild Tailgate Party, Thursday, October 20th from Noon – 2:00 PM.
Dow: Improve the aesthetics and performance of insulating glass
Dow is now offering the opportunity to realize an aesthetically pleasing “one-color-edge” for insulating glass.
Industry Invited to NGA Glass Conference: Chicago
NGA Advocacy & Technical Services Director invites industry to NGA Glass Conference: Chicago
Tvitec Cricursa unveils the most complete offer of flat and curved glass solutions
Tvitec is launching with Cricursa the most complete and comprehensive offer of high-performance flat and curved construction glass solutions on the market.