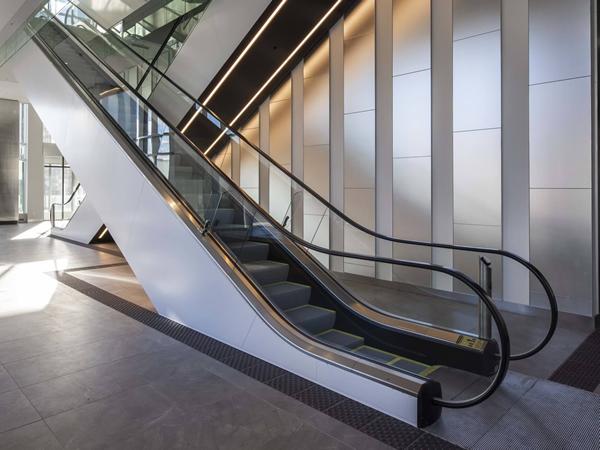 The Bell Centre is home to the historic Montreal Canadiens, an original six NHL franchise that carries with it the spirit of the entire city.

The Habs are more than a hockey team for most Montrealers, they are a brand that represents the pride of the city – a city with a unique European flavor that sets it apart from all others in North America.

So when the Tour des Canadiens (Canadiens Tower) condo complex was announced, it got people’s attention. The designers and architects involved in the project knew that they needed to deliver an experience that was worthy of carrying the name of the NHL’s most storied franchise. In total, 3 skyscrapers now comprise the Tour des Canadiens complex, each one of them impressive in terms of interior and exterior design.

With such high standards and expectations, every detail of these towers was scrutinized and one of the most important elements in the design of these buildings was the appropriate use of light. Humà Design was heavily involved in the interior design of the TDC towers. Their goal was to design a space that evoked the pride of the franchise while maintaining a contemporary feel using materials that incorporate both natural and artificial light into the common spaces of the towers.

The Design Directions for TDC2

“The goal for Tour des Canadiens 2 was to create a prestigious building as part of the Master Plan for the Quad Windsor,” said Caroline Joly, Interior Designer at Humà Design. “To this end, TDC2, with its 553 housing units, provides design direction for its TDC3 twin.” Undoubtedly, lots of responsibility fell on the shoulders of the Humà team, who were in charge of designing all the interior spaces of TDC2, from the basement lobbies to the 54th floor Skylounge. “Everything was designed in harmony with the Canadiens brand,” added Joly.

In addition to its own common spaces, including atrium, lobby and terrace, the tower also includes a public atrium that grants access to the Bell Centre, underground metro system and surrounding office buildings.  “TDC2 is located in the space of downtown Montreal’s former international train station and several hotels,” Joly continued. “This site witnessed the effervescence of the 1930s and this period of great travel, glamour and luxury, and that’s what inspired the direction of design towards contemporary art deco interior architecture.”

As a reflection of this design, the lobby transports occupants back in time with a feel reminiscent of the site’s vibrant past. The atrium features wide open spaces using lots of etched glass to give it a clean and icy feel – like that of an ice hockey surface. Other spaces like the Winebar offer a warmer, more luxurious setting with coppery materials and leather furniture.

The gym, dedicated to the Canadiens, is trimmed with the team’s trademark blue, white and red color scheme. Finally, the pool area stretches out into an outdoor spa with a view of the entire downtown core. Humà Design was also involved in creating the games room, changing rooms, terrace, corridors, units, penthouses and the Skylounge.

The Role of Natural and Artificial Light and Materials Used

Heavy emphasis was placed on using only the highest quality materials for this project, which included acid-etched Starphire mirror with Satin finish from Walker Glass. In a contemporary setting such as this, the glass substrate needed to be as neutral as possible, which is why the choice of Starphire glass by Vitro was imperative to avoid the greening effect of clear glass. This combination of neutral glass and etched mirror finish enabled Humà to incorporate light in creative ways to bring out the best in their design expression.

“Light plays a big role in design,” said Joly. “The use of the acid-etched mirror in the Atrium, on two floors at double height, allows us to appreciate all the splendor of the material and the variation of the daylight reflected in the surfaces.” A sense of openness is felt in these spaces with high ceilings, large windows and an abundance of daylight. The material used needed to slightly reflect the incoming light without creating an uncomfortable distraction for people passing by.  “For more enclosed spaces, such as windowless corridors, the acid-etched Starphire mirror is highlighted with artificial light. The creation of a black box for each elevator hall is enhanced by the light reflected on the surface.” Continued Joly.

In order to create an atmosphere of luxury and nostalgia from the grand hotels of the 1930s, special attention needed to be paid to the design of each unique space. Different materials were used in certain areas, like glass and stainless steel in the atrium and rich wood and leather in the Winebar, to highlight their identity and draw from the history of the location. 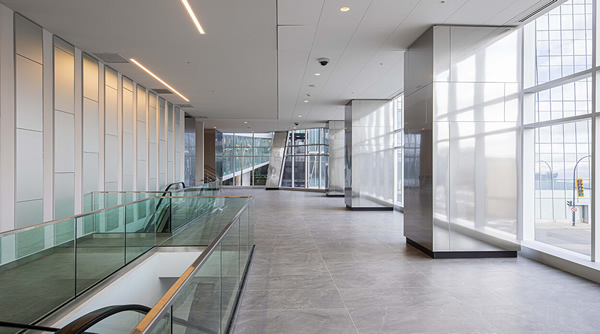 The Tour des Canadiens 2 project’s design excellence was awarded at the 13th edition of the Grand Prix du Design for best Residential Space. What does this mean for the creative team at Humà Design? It represents a huge recognition of their work on a project that is not only very important for their company, but also for the city. After five years of hard work designing the interior of these iconic towers, all of their efforts paid off.

Materials like Starphire acid-etched mirror by Walker Glass allowed this project to achieve the level of excellence that was expected. When it comes to interior design, details matter, and we can easily see through the use of daylighting techniques and quality materials like Starphire Satin mirror that these elements come together to create something truly spectacular.

Huma Design + Architecture is a firm built around the notion of excellence and unconditional customer satisfaction. The architectural team is a good balance between experience and new, dynamic potential, all of them customer-focussed. Their interior and graphic design teams have been recognized amongst Quebec’s most renowned designers and have received numerous awards among peers and both national and international audiences. https://www.humadesign.com/en/firm/introduction/ Vitro’s new vacuum insulating glass (VIG) CE course
Now available on demand: Vitro’s new Continuing Education course
High-performing enclosure of 663 S. Cooper Street boasts Solarban® 90 by Vitro Architectural Glass
To enhance its 10,000 square-foot, high-performing enclosure, Archimania carefully selected Solarban® 90 glass by Vitro Architectural Glass.
Webinar: Elevating Exterior Design with Glass and Glazing Solutions
This Glass in Architecture Academy webinar will feature presentations of several case studies where high-performance glass and glazing not only provides a beautiful-to-look-at façade but also increased performance at every level.
Guardian Glass Project: Italcementi iLab
The use of advanced Guardian® glass, in addition to these other innovative features, has helped the iLab to attain the first LEED Platinum environmental accreditation in Italy.
The scientific master felt the spirit of the NorthGlass craftsman
Rubinstein Commons has curved walls and roof, and its design relies on the spacious skylight and glass walls to complete the intersection between the volume.
Daylighting for winning environments | OKALUX
Thanks to modernization by the architects Populous, The Barnes Center at The Arch offers the students of Syracuse University a variety of sports and wellness options. 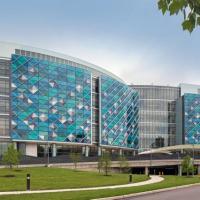 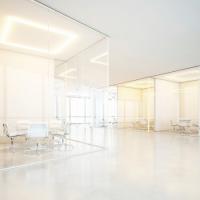 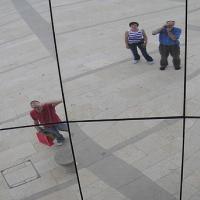 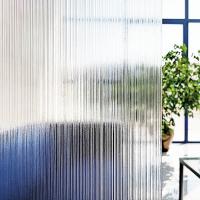