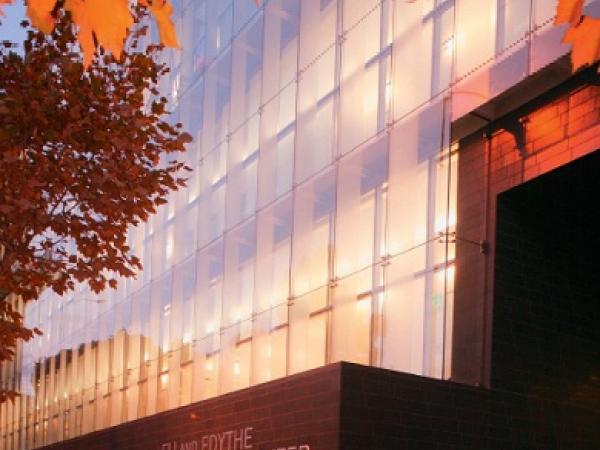 This system further expands the possibilities for structural glazing systems in the most demanding architectural glass applications, while still maintaining the elegance of design and detailing.

Through a fully integrated engineering, manufacturing and installation approach, the combination of Pilkington Planar™ structural glazing and SentryGlas® laminate provides architects with much greater freedom to express their designs while still meeting the growing demands for increased safety and security.

The advantages of SentryGlas® over traditional PVB are proven and well documented – the most important of these being increased stiffness and toughness, as well as better performance over a wide temperature range.

Compared to traditional PVB laminated systems, the laminated glass in Planar™ | SentryGlas® is stronger, which means the system can be made with thinner glass.

As Ingo Stelzer, design specialist at DuPont Glass Laminating Solutions states: “If you load PVB, it creeps away at very low stress levels, whereas SentryGlas® needs much higher forces to deform it. SentryGlas® has advantages for safety and security applications, as it behaves like engineering materials.”

In addition, the Pilkington Planar™ team has developed customised fittings for the Planar™ | SentryGlas™ system, which incorporate advanced engineering plastics technology. These connections provide a number of additional functions including developing maximum strength whilst eliminating compression in the inter-layer, which can reduce load bearing capacity and durability.

Ingo Stelzer comments: “With SentryGlas®, coupling effects are nearly 100 per cent, allowing larger glass spans. Under a specific load, PVB deflects much more than SentryGlas®, which is up to100 times stiffer. By changing interlayers, you can down-gauge glass thicknesses by 30 per cent, reducing embodied energy and supporting structure through lower weight.”

Independent tests have proven that the Planar™ |SentryGlas® system has residual strength, even with both glass components broken. In locations where typhoons or hurricanes are a potential risk, this offers greater peace of mind for the end user and also makes it possible to specify laminated glass for canopies, skylights and exterior glass railings, thereby providing protection from falling glass if breakage should occur.

In the case of laminated glass with SentryGlas®, the balustrades broke but returned to their original position.

SentryGlas® has undergone extensive tests to ensure its longterm edge stability as well as its compatibility with silicone sealants. Many structural glass designs use butt joints, which are sealed to be weathertight. With standard PVB, silicone joint sealant may react with the interlayer, depending on the climate. To date, following rigorous testing, DuPont has seen no negative reactions between sealants and SentryGlas®.

Using the Pilkington Planar™ Integral system, Planar™ | SentryGlas® can be supplied with fasteners hidden within the laminate, which allows a much wider choice of glass than traditional structural laminates.

The SentryGlas® interlayer is significantly clearer than traditional interlayers, and when used with Pilkington Optiwhite™ glass, exceptional clarity is achieved.

Tim Morgan, technical development manager at Pilkington United Kingdom Ltd sums up the benefits of Planar™ | SentryGlas®: “In modern-day buildings, it is not just the glass products which have become more technically challenging.

Many building structures nowadays are very flexible and even the concept of attaching panels of glass to cables rather than solid steel frameworks is regularly considered. In such circumstances, interface details and connection technologies must be designed in a sympathetic and informed manner but, once you get the engineering right, then you can ask toughened glass with strong interlayers to do things which will amaze building owners and the general public.”

Morgan goes on to state that having rigorously tested SentryGlas® with its Pilkington Planar™ point fixed system, “The Pilkington team is confident in this advanced interlayer material and continue to ask more of it than of more traditional materials. Indeed, our engineers have had to re-calibrate their design philosophy, for now the glass isn’t the limiting factor and we can consider supporting loads, even when the glass is broken.”

Applications for the Planar™ | SentryGlas® system are numerous, ranging from skylights, canopies and facades, to hurricane impact windows and security glass. Here are just a few recent examples:

In 2011, Planar™ | SentryGlas® was the preferred choice for the double skin façade for the cable wall of a new research building at the University of Southern California in Los Angeles, USA (see images 1,2,3).

This dual skin cable wall acts as both an acoustic and thermal barrier for the new Eli and Edythe Broad Center for Regenerative Medicine and Stem Cell Research building. The exterior Planar™ façade is supported by a series of pretensioned stainless steel cables that span 63 feet from top to bottom and which are laterally braced at each floor of the building. The glass panels are supported by 905 countersunk Planar™ fittings. The glass is Pilkington Optiwhite™ low iron, laminated glass with a 50% acid etch frit pattern.

SentryGlas® was chosen as interlayer for the glass façade due to its thinner, lighter qualities and for its open edge stability.

The new façade enables the building to harvest solar energy, whilst protecting the building’s occupants from unwanted glare, solar gain or energy loss.

Originally built in 1994, the building underwent a renovation in 2009. ALM Brand has a longstanding commitment to environmental responsibility, and the façade of its headquarters was cutting edge in its day as far as energy management was concerned. A ventilated double skin wall with integrated windbreaks and sunshades provided a best practice sustainable solution. However, with a further 15 years of façade technological development now available, the original 12 mm toughened external skin of the double skin wall has been replaced with a Pilkington Eclipse Advantage™ Blue-Green product. This glass gives a visually impressive contemporary feel to the building façade, whilst also delivering greater benefits in terms of both low-emissivity properties and solar control performance.

The new façade is the first to utilise Pilkington Planar™ panels that incorporate Building Integrated Photovoltaics (BIPV). The 84-point fixed BIPV panels, which cover just 10% of the new façade, are expected to generate 41.5 kW of electricity, or 5% of the overall building energy needs. The 1500 mm x 3600 mm sized panels are considerably larger than the more standard product and comprise a 4 mm-thick Pilkington Optiwhite™ front cover plate, laminated to an 8 mm Pilkington Optifloat™ structural component. The custom emerald green photovoltaic cells were specifically chosen by ALM Brand.

In addition to upgrading the environmental performance, the renovation has updated its mechanical performance by changing the glass type from a point-fixed toughened system to a point-fixed toughened laminate, designed to stay in place within the façade even if all the glass components are broken. To deliver maximum cost saving during the renovation works, the original mullion system and fixing anchor points were reused. This required the new Pilkington Planar™ panels to be equal in strength, size and weight to those in the original specification. Planar™ | SentryGlas® was more than a match for the original technology, with two 6 mm toughened glass panels laminated together with a 1.52 mm SentryGlas® interlayer.

There were challenges to overcome on the project, as Carsten Moller, chief architect at ALM Brand explains: “This project was a new area for me in terms of technical detail and specification. Working with the NSG Group was therefore a great help, not only because the glazing options they offered were one of the few that met our requirements, but also because the expertise and knowledge of the team ensured this unique project delivered the goals we set out to achieve.”

Planar™ | SentryGlas® was also the preferred choice for the canopy and fins on the Columbia Center high-rise building in Washington DC, USA (see image 5).

Pilkington Optiwhite™ low iron glass was utilised on all portions of the glazing including the vertical glass fins, horizontal glass beams, canopy, façade and roof. The Planar™ |SentryGlas® fins and canopy connect to a steel portal frame, which penetrates the façade around the entrance. The Planar™ | SentryGlas® canopy is suspended from the structural glass beams.

Hickok Cole Architects selected SentryGlas® as the laminate because of its clarity, post-glass breakage stability and edge durability. The laminated glass system was installed by W&W Glass Systems LLC.

The Twelve Oaks regional shopping centre based in Novi, Michigan, USA, is home to around 200 speciality stores and restaurants. The external Planar™ | SentryGlas® skylight, which dominates the main entrance at the front of the building, is supported by horizontal laminated beams that transfer load back to the steel support matrix (see image below). The panels are fixed using stainless steel 905 bolts. The design load case included snow, wind and Seismic loads.

The architect for the project, Neumann/Smith Architecture, opted for SentryGlas® because of its post-breakage stability, edge stability and it enabled increased spans to be utilised between beams.

Differentiation in Architecture by Professional Designs and New Materials
The economy globalizes. The industries concentrate. The productions become uniform. Cultural specificities disappear. About architecture and glass in architecture, it is the same phenomenon.
Ahead of the Curve: Innovative Cold Bent & Insulated Glass Entry Wall
“Going ahead of the Curve” is what the advertisement states outside of newly remodeled, Class A office building at 160 Elgin Street in Ottawa, Canada.
Edge-laminated Transparent Structural Silicone Adhesive (TSSA) Steel-to -Glass Connections
This work focuses on the Transparent Structural Silicone Adhesive (TSSA), produced by Dow Corning.
Dimensioning of silicone adhesive joints
Eurocode-compliant, mesh-independent approach using the FEM
Artificial intelligence for structural glass engineering applications
Overview, Case Studies and Future Potentials
Structural Considerations on Timber-Glass Composites at Fire Scenarios
This paper focuses on a recently developed concept, in which glass is combined with timber to provide post-breakage strength and ductility.