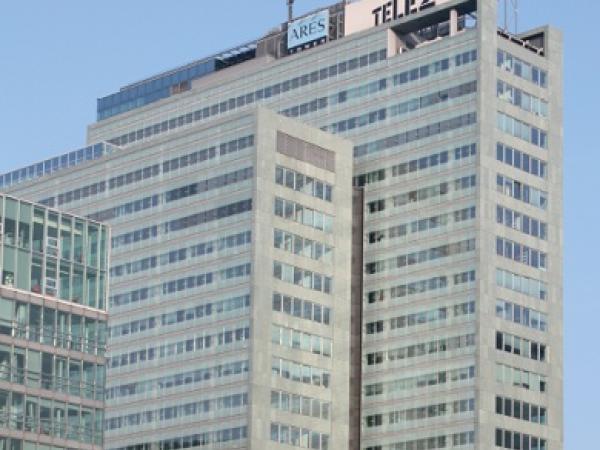 The Ares Tower, one of Vienna's tallest office buildings, has a double skin with a newly installed laminate glass curtain wall façade.

Thanks to the use of DuPont's SentryGlas® interlayer, the façade's individual panels are neither thicker nor heavier than the previous single pane glazing, meaning that replacement could be carried out quickly and at high cost efficiency.

At 26 stories and around 100 m tall, the Ares Tower, completed in 2001, is one of Vienna's tallest buildings. Its glass curtain wall façade of 2521 rectangular point-fixed panels, each measuring 1370 mm x 3040 mm, giving a total area of 10,233 m², was originally constructed using single pane toughened glass. In order to eliminate any potential hazards to passers-by, a film was bonded to the glass to retain any fragments in the event of breakage, for instance due to nickel sulfide inclusions. Because this film had yellowed over the years and in order to maximise safety for passers-by, the tower's owner had all the originally installed single pane glazing replaced with laminated glass units during a comprehensive refurbishment in 2011 and 2012.

MGT Mayer Glastechnik from Feldkirch in Austria, a specialist in high-performance glass solutions, fabricated the units using the DuPont™ SentryGlas® interlayer, which, due to its high strength and stiffness, enables comparatively thin and consequently light glazing units to withstand elevated loads. This meant that the replacement required neither reinforcement nor other costly changes to the load-bearing sub-frame.

The laminated glass units supplied and installed by MGT consist of two 6 mm thick sheets of single pane toughened glass which were subjected to heat-soak testing prior to lamination. This involves exposing the prestressed glass to temperatures of 290 °C in a furnace for a number of hours so further reducing the risk of spontaneous breakage. The two sheets are bonded together with a 1.52 mm thick SentryGlas® interlayer. The resultant total panel thickness of only 13.52 mm is virtually identical to that of the previously used 12 mm single pane toughened glass panels, while the weight is almost unchanged at 125 kg.

The particularly cost-effective combination of low thickness and high loading capacity is possible because SentryGlas® interlayers are able to transfer elevated shear forces thanks to their high strength and rigidity. Lamination of the glass and interlayer results in a laminate with good shear rigidity which behaves almost monolithically under flexure. In practice, under identical loading, laminates with SentryGlas® undergo less than half the deflection of a laminate with PVB and thus behave almost identically to single pane toughened glass of the same thickness. On the basis of this structural coupling effect, the Deutsche Institut für Bautechnik (German Institute for Building Technology) in Berlin has granted general approval (the ,Allgemeine bauaufsichtliche Zulassung‘) for the use of laminated safety glass made with a DuPont™ SentryGlas® interlayer in construction. In Germany, the interlayer can now be included as a load-bearing element when calculating the load capacity of laminated glazing. Costly case-by-case approval is no longer necessary.

As Walter Mayer, Chief Executive of MGT, explains: "Using conventional PVB interlayers would have meant using a distinctly thicker laminated glass structure in order to meet regulatory requirements for maximum deflection under wind loading. This would have meant that this refurbishment could not have been carried out within the specified time and cost constraints. Because we used the SentryGlas® interlayer, we were able to make direct use of the existing load-bearing structure while meeting all requirements."

Thanks to its higher post-breakage stability, particularly high transparency and greatly reduced yellowing, such laminated glazing with SentryGlas® is not only of interest in refurbishment projects but also opens up many exciting prospects for architectural design. And for building owners, laminated glazing with SentryGlas® has economic advantages since this interlayer has much better moisture resistance than conventional PVB, ensuring high levels of edge stability and weathering resistance over many years.

…is a high-rise office building in the Donaustadt district of Vienna made up of two narrow, parallel blocks slightly offset from one another. As with other buildings in "Donau City", the tower was named after a mythological figure, in this case the Greek god of war Ares. Its cool, glazed exterior, elegant atrium with refined interior decor and the 'Wolke 19' event space on the top floor make the Ares Tower a member of the world's leading office buildings.

The double skin ensures a pleasant atmosphere in its some 40,000 m² of office space. The virtually completely closed glass curtain façade keeps the wind and weather away from the inner windows. The resultant vertical air circulation stops overheating in the height of summer, while the air gap not only cuts heat losses in winter but also provides considerable soundproofing. One particularly attractive feature of this design for office users is that it is possible to open windows even on the higher floors. All the panels of the curtain wall façade are screen-printed with horizontal stripes at the top and bottom. In combination with adjacent panels, this decorative feature creates elongate design elements extending over the entire width of the building which enhance its elegance and also act as a clear warning to birds.

Differentiation in Architecture by Professional Designs and New Materials
The economy globalizes. The industries concentrate. The productions become uniform. Cultural specificities disappear. About architecture and glass in architecture, it is the same phenomenon.
Ahead of the Curve: Innovative Cold Bent & Insulated Glass Entry Wall
“Going ahead of the Curve” is what the advertisement states outside of newly remodeled, Class A office building at 160 Elgin Street in Ottawa, Canada.
Edge-laminated Transparent Structural Silicone Adhesive (TSSA) Steel-to -Glass Connections
This work focuses on the Transparent Structural Silicone Adhesive (TSSA), produced by Dow Corning.
Dimensioning of silicone adhesive joints
Eurocode-compliant, mesh-independent approach using the FEM
Artificial intelligence for structural glass engineering applications
Overview, Case Studies and Future Potentials
Structural Considerations on Timber-Glass Composites at Fire Scenarios
This paper focuses on a recently developed concept, in which glass is combined with timber to provide post-breakage strength and ductility.