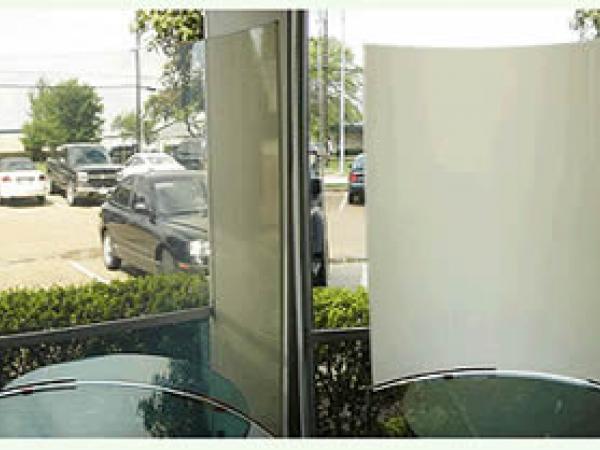 And it continues to gain prominence. The trends associated with the uses for privacy glass continue to widen and have developed into new markets in sectors including hotels, healthcare, security, advertising, marine, aviation interiors and fire doors.

A firm like SmartGlass International says it has directed its LC SmartGlass mainly at the internal partition sector where integrated blinds were typically used.

“In the current economy, where the commercial property sector has fallen dramatically, many companies are choosing to refurbish existing rather than moving to new premises.  This is a rapidly growing market as companies seek to improve employee well being, health and productivity. Privacy glass allows large office spaces to feel light and airy but easily affords privacy to room occupants when required,” says John Browne, managing director of SmartGlass International.

This technologically advanced glass allows windows to change their tint levels manually or automatically.  The benefits to using this glass are many including offering building occupants control over light, heat and glare.  With energy costs being key drivers in building design, SPD SmartGlass offers the ability to harvest daylight and to save on the costs associated with lighting, heating and cooling.

The Queen of England using LC SmartGlass to declare open the Royal Institution of Great Britain.

“We have seen growing demands for very high end products which incorporate LC film (for privacy) and SPD film (for solar control) into a single unit. For example, in 2009 we supplied a number of ships portholes which were manufactured using a very complex lamination configuration including LC film, SPD film, lightweight glass and extra strong glass.  The benefits to using such a configuration are numerous and despite the relatively high cost of such configurations, the benefits can outweigh the cost,” Browne said.

He added, “We are seeing several projects where SmartGlass is being used as advertising media in portable or fixed displays.  Many advertising agencies and designers have really embraced the possibilities of using SmartGlass and they often surprise us with their conceptual ideas. The sets of many TV shows now incorporate SmartGlass as an integral component. Other marketing uses include the Guinness storehouse visitors centre in Dublin, Glenlivet distillery in Scotland, Debenhams in London and many more.”

As far as the production of switchable privacy glass and bringing an improvement in its efficiency is concerned, Yu says the focus has been on yield improvement, large format of film (up to 60” wide), bringing material cost down, plus improved performance in haze (lower), angle (wider) and driving voltage (lower).

While the production techniques within SmartGlass International are largely similar to established glass lamination techniques, there are a number of technical steps that have been added and/or improved over recent years.  In order to protect its investment, company’s in-house manufacturing techniques are largely confidential.

The company has invested heavily in plant and machinery and has designed or modified machinery specific to its manufacturing processes.

“We have two lamination lines allowing production capacities in excess of 200 m² per week on an eight-hour shift. We employ lean manufacturing principles which allow us to quickly react to large order volumes.  All of our SmartGlass panels are bespoke and made to order which is an advantage and a disadvantage.  We do not have to hold large stock volumes but we need to be highly efficient in order to meet client deadlines and lead-times,” says Browne.

The raw materials used in the company’s manufacturing techniques have been extensively tested before being considered for use in its products.

Browne says there are always cheaper alternatives to every component in this business but the cheap option is most often not the best.

Using cheap inner-layer adhesives for example is extremely dangerous. There can be some significant short term cost savings but the mid-term risks of product failures are high and can be extremely costly and inconvenient for the client.

As large volume client orders (2000 m²+) become more regular, the company can assure its client that the deliveries will be made on time and in perfect quality.

“Through proper planning we are able to very quickly double or triple our production capacity allowing us to deliver large volume requirements quickly and efficiently,” said Browne. The company spends heavily on research and development and plans to continue the same in future as well.

“A goal is to have LC SmartGlass used in internal partition systems where typically integrated blinds have been used.  In order to do so, we need to ensure that our price is competitive and to dispel the myths of SmartGlass being too expensive to use in bulk volumes,” said Browne.

SmartGlass has seen some companies selling liquid crystal film that is glued onto glass surfaces.  While this may in some cases be slightly less expensive than SmartGlass’ finished products- or in fact may be often more expensive – Browne feels that it is important to point out that the benefits to using SmartGlass over the glued film technique are vast and include: switching performance and haze, UV blockage, acoustics performance, electrical safety, compliance building regulations, maintenance and cleaning etc.

Companies have indicated that instead of sand blasted or obscured privacy glass that stays the same all the time, one can now have a glass which switches from 100% privacy to 92% clear for clutter-free viewing.

For his part, Browne said some companies make dangerous and erroneous claims that they cannot actually back up.

“We find it absolutely essential to be honest with our clients and to advise that it may be possible to see through obscured images our LC SmartGlass.  LC SmartGlass offers extremely low levels of haze when compared to alternate products and excellent levels of privacy but high level lighting sources or television screens can be seen albeit in a highly obscured fashion. Our hybrid product which combines LC & SPD films does offer 100% privacy.  It should be noted that the level of privacy offered by LC Smart Glass will always be better than that offered by sandblasting or opaque obscure privacy film,” shared Browne.

Polytron’s Yu mentioned that privacy is created by light scattering of liquid crystal in the polymer matrix.  Image is obscured due to light scattering, but around 52% of scattered light will still pass through which provides natural light to the room.

“To achieve good privacy effect, the object should be at least one inch away from the viewer. When it is powered on, it is “clear” state with about 75% of light through. The transmission of PET film is about 80% (without polymer dispersed liquid crystal),” explained Yu.

The actual power requirement can vary but generally when 65-110V AC is applied to the SmartGlass through the supplied fire rated cables, the SmartGlass switches immediately from opaque to clear.  Power consumption can depend on the application, panels sizes but is approximately 3.5 – 5 watt/ m².

Explaining the principle, Browne said: "When the electrical supply is switched on, the liquid crystal molecules align and incident light passes through and the LC SmartGlass panel instantly clears.

When the power is switched off, the liquid crystal molecules are randomly oriented scattering light and the LC SmartGlass becomes opaque (private).

Yu added that power consumption is <0.5 watt per square foot when it’s clear. Changeover from clear to obscure does not take any power. Installation is similar to that of regular glass.  It is serviced and supported by glazing companies.  Polytron has an installation instruction for general glazing and electrical wiring.

There is still a myth that SmartGlass is too expensive to be commercially viable in large volume orders, says Browne.

“This is not true and with recent price reduction it is very much commercially viable and we are seeing large volume orders now that we wouldn’t have a number of years ago.  We have to work hard to deliver this message to the customer and to ensure that architects and engineers can comfortably specify our products.

There are many major developments which include SmartGlass for use in aircraft, marine applications, advertising and many more,” said Browne.

He added, “SPD SmartGlass is one such development; we expect it will create new markets for SmartGlass in external glazing facades allowing control over light, heat and glare. SPD SmartGlass can be manually or automatically “tuned” to precisely control the amount of light, glare and heat passing through a window.”

According to Browne, while glass is a favoured product for use in building facades; glare, solar heat gain and UV exposure are problematic and can often make the use of glass impractical resulting in the need to invest in expensive solar shading devices. Glass facades using patented SPD light-control technology reduce the need for air conditioning during the summer months and heating during winter. The ability to instantly switch the glass to maximise daylight when it’s really needed and to provide controllable solar shading during peak light conditions is valuable and unique.

Yu says at this juncture, this product still depends on project basis.

Glass Constructions Under Extreme Boundary Conditions
Constructions at exceptional locations are often challenging but worth one’s while. Extreme boundary conditions and sophisticated demands of the client have to be considered.
20 Farringdon Street - Case Study
Unitised Façade System Designed with a Highly Transparent Façade of Low G-value Combined with Blast Requirements
Smart products in the façade: Dynamic glazing III
This article is dedicated to dynamic glazing in the façade. This is an update of the articles on smart products in the façade I and II published in March 2019 and May 2020.
Structural glass: A new remedial tool for the consolidation of historic structures
This research investigates the potential of glass as a new design tool to highlight and safeguard our historic structures.
Experimental Study on Thermoplastic Interlayers in Laminated Glass Using Fiber Optic Strain Sensors
The study describes the results of the principal applicability of fiber optic strain sensors to evaluate the structural behaviour of laminated glass and provides the basis to define a model for the material characteristics of viscoelastic interlayers.
Structural Silicone Glazing – Design & Modelling
The aim of this paper is to identify and discuss challenges with the assumption that the SSG is isolated from the glass self-weight and provide a better understanding on the complexity of SSG systems.
Durability of Saflex® Structural mechanical properties
The determination of interlayer modulus data is complex.
Sharing of General Loading in Double Glazed Units: The BAM Analytical Approach
Here, comparisons are made with numerical analyses, performed by implementing an ad hoc routine in the software Straus7, developed by Maffeis Engineering.
Redundancy Tests on Glass Fins
The post-breakage behavior of glass beams is not easy to predict, therefore Octatube performed a range of tests on different glass fins varying the test setup.
Complex Curved Storefront: The Looking Glass
This paper focusses on the special glass part of the façade that covers both the ground floor as well as the first floor with a total height of 8.5 m and width of 6.5 m.
AGI Case Study: 500 Walnut
Elegant glazing - from walls to slabs - clads a residential tower.
Bend, don’t break: new tool enables economic glass design
Computer scientists develop a design tool that opens up the use of a cost-efficient technology for curved glass panels. The tool is based on a deep neural network and allows for the free-form design of beautiful glass façades.

TurkishGlass participated at the ZAK World of Façades Conferences