Transparency at the highest level | sedak 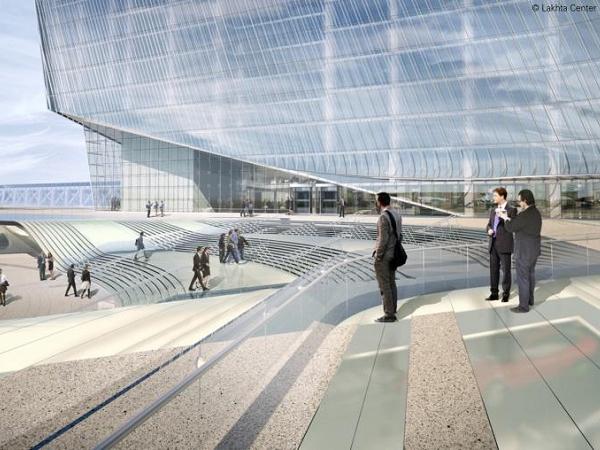 Europe‘s tallest building dominates the north of St. Petersburg, directly on Neva Bay. Whilst from a distance the sheer size of the Lakhta Tower emanates the excellence of the building, directly at its foot two glass multifunctional buildings and a long, curving lobby bed the 462 meter tower into a harmonically undulating ensemble and give it an architectural basis.

The gigantic dimensions are reflected by the entrance areas of these multifunctional buildings. With a total of 326 glass fins in the north and south blocks as well as 78 glass fins in the entry archway, sedak (Gersthofen, Germany) provided the structural framework for the large-area glass façades. Among them were the longest laminates used in any current construction worldwide.

Whereas the Lakhta Tower primarily contains office space and a panorama restaurant, the adjoining buildings extend the new quarter functionally. In the East the lengthy entrance lobby melds into the colossus. Here also, the architects‘ passion for glass is clearly visible. A large glass façade opens the new quarter towards the city.

This was realized with 78 glass fins, raising the transparency to the highest level. The seven-layer laminates made from 12 mm thick sheets of glass were provided with high-grade steel shoes and equipped with steel elements by sedak during manufacture. A flush-fitting fixture was thus created that enables an unobtrusive and aesthetically attractive attachment of the façade panes. This perfect interaction underpins the architectural vision of using organic forms to connect the power of the water and the flow of the space with an openness and lightness.

As the new home for diverse public facilities the planers created two extensive buildings to the west of St. Petersburg‘s new landmark. The buildings, wrapped completely in glass, swing away from the tower in a series of waves, rising steeply in the direction of the water. In addition to a cinema, planetarium and science centre, they house cafés, shops and a spa.

In order to outwardly emphasize this openness for everyone, the recessed corners in the northern and southwestern wings rise significantly and invitingly above the rest of the building. A total of 326 glass fins carry the façade, narrowing towards the top, where they follow the external profile of the buildings. Here, the 17.2 meter long fins that support the façade at the highest points stand out. They are the longest glass fins currently in use in any building. „This is a milestone that we are very proud of, but the limits have not yet been reached“, said sedak Manager Ulrich Theisen looking back at the project, which was worked on for over a year.

In order to support the glass areas of the façade resulting from the geometry, with their various loads, sedak manufactured the glass fins in multiple designs. The main load is carried by the numerous triple layer laminates – in three different widths, 237 glass fins were used in the construction of the two auxiliary buildings.

These are complemented by 58 eight-layer laminates (8 x 12 mm) equipped with high-grade steel bases, 14 seven-layer (5 x 12 mm and 2 x 15 mm) as well as 17 six-layer laminates (6 x 12 mm). Glass brackets were laminated onto the latter to attach the steel elements, achieving an optically seamless transition to the façade components.

Over the complete height of the various fins sedak accurately drilled the attachment points for te façade glazing: a total of 3316 holes with diameters of between 32 and 60 mm - and that with a high degree of precision. In the subsequent lamination everything had to function perfectly. „That was a great challenge because absolutely no tolerances were possible“, explained Theisen.

Holesov plant on a roll with new-format SentryGlas® Xtra™
Trosifol has announced that its new SentryGlas® Xtra™ (SGX™) ionoplast interlayer is now available in roll form from its plant in Holesov in the Czech Republic.
The Big 5 postponed to September 12-15, 2021
The next edition of the event connecting the global construction community in Dubai is expected to boost the construction sector’s recovery efforts in the post-COVID-19 era.
Hegla Launches CTF Glass Tempering Furnace
HEGLA TaiFin has now expanded its expertise in the glass processing sector by launching the CTF Series of flat glass tempering furnaces.
Guardian Glass Project: Basque Health Department Headquarters
Designed by architect Juan Coll-Barreu, the headquarters building of the Basque Health Department in Bilbao, Spain, is a fantastic prism of glass and steel.
SentryGlas® from Trosifol delivers structural capabilities and unhindered views in Thailand’s tallest building
The 314 m (1,030 ft) tall 78-floor King Power MahaNakhon, located in the center of Bangkok’s central business district, strikes an impressive pose on the skyline as Thailand’s tallest building.
VetroMount Balustrade System from Bohle Honoured with Red Dot Award as Innovative Product
The VetroMount balustrade system is based on the ingenious yet simple idea of the cable-tie principle, which makes its installation as easy as can be.