The key themes at BAU 2021: The challenge of climate change 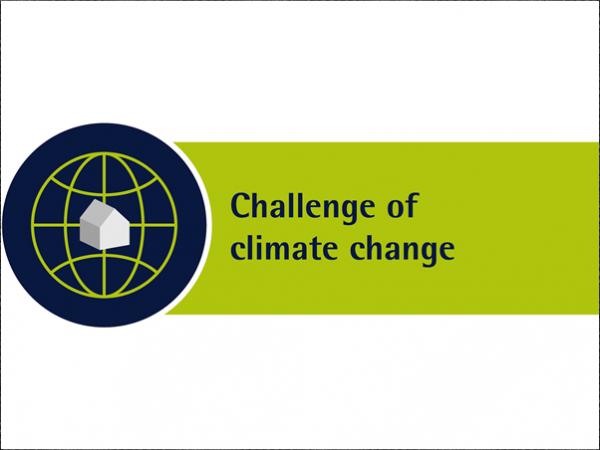 They set the pace and give structure to the wide range of products and services on show—the four key themes at BAU 2021.

Many exhibitors will align their presentations with these themes and showcase solutions. In the forums at the fair, the key themes will be explored and discussed from a range of aspects. And in the special shows they will be illustrated using examples of products and projects. Below we present the first of those key themes: The challenge of climate change.

Climate change seems to have been pushed into the background in the wake of the corona pandemic, out of public awareness. On the one hand. On the other, the COVID-19 epidemic is heightening the senses. It makes it clear that precautions must be taken to avoid being completely overwhelmed by a development. This is also and more than ever true for climate change.

In the efforts to tackle rapid climate change, the building sector is called upon more than ever to come up with solutions. The best chances for success lie in collaboration between engineers, manufacturers and creative minds. All of them must find a way of constructing buildings and cities in a climate-neutral way. The components in this are: energy-efficiency, recycling, sustainability and resilience.

Scientists around the world are in agreement: natural disasters such as floods, hurricanes, storms and droughts will be the “weather” of the future, unless we succeed in bringing down global warming to well below an increase of 2°C compared with pre-industrial levels. This was precisely the goal identified by the UN in the Paris Climate Agreement in 2015. So far there has been little progress.

It wasn´t until the end of 2019 that things started to happen: The European Parliament declared a climate emergency and Germany and its European partners agreed to reduce greenhouse gas emissions by at least 40 percent by 2030 compared to 1990 levels. The Europeans committed to achieving a range of goals by 2030: above all the goal of reaching zero emissions by 2050 in Europe. So now it is high time to concentrate on implementing those intentions!

Important role for the buildings industry in emissions reduction

Although the building sector has launched many innovations over the last 20 years in energy-efficient planning and building, this sector still accounts for 14 percent of all CO2 emissions in Germany. Via existing tools such as the EnEV regulation on energy use in buildings and KfW grant programs, significant reductions in energy emissions are expected by 2030, but this alone will not be enough to achieve the targets.

The German government calculates that this target will be missed by around 20 million tons of CO2 per year. A mix of increased grant funding, information and advice, combined with carbon pricing and regulatory law, is being implemented in a drive to ensure this target is met. Specifically, for example, there is grant funding for renovation and modernization of existing buildings, replacing heating systems and for energy advice.

The focus in such initiatives, however, is no longer solely on individual buildings, now there are also grants for energy-efficiency improvements implemented across entire urban districts. These look at buildings in the context of their environment, with the aim of creating an energy-efficient district. Energy deficits in one area are compensated by surpluses in another area.

Powerhouse Brattørkaia, a pioneering energy-positive building, was built in 2019 in Trondheim. Designed by the Norwegian architectural bureau Snøhetta, the building envelope is clad with photovoltaic cells. Despite the very northerly location, these cells manage to produce more energy than the building consumes. So, not only does this energy provide for the daily needs of the Powerhouse Brattørkaia itself, surplus energy is also made available to nearby buildings and associated means of transport, such as electric buses, cars and boats in a local micro-network.

Far from being an isolated example, the concept behind this building is attracting wide interest elsewhere—in Germany, for instance, demand for photovoltaic systems has risen significantly in recent years. As well as cheaper prices for such systems, building-owners like the idea of using energy they have generated themselves, storing the surplus in highly developed lithium-ion batteries and making that available for mobility purposes.

Reducing waste through the use of alternative building materials

560 million tons—that´s 90 percent—of all mineral resources used in Germany each year, go into the production of building materials, and the building sector is responsible for 54 percent of the waste generated, according to the Deutsche Bundesstiftung Umwelt (German Federal Environmental Foundation). On a global perspective, cement production is responsible for more carbon emissions than the entire aviation sector. The choice of building material therefore plays a big part when it comes to reducing the very high level of consumption of natural resources.

Conventional materials such as concrete, steel, glass, bricks, blocks and wood are now joined by new names such as Typhaboard, a material made from typha (cattail) and a mineral binder. It is fully compostable and suited for use as supporting and insulating wall elements. The Fraunhofer Building Innovation Alliance is researching this at present. Scientists are also examining so-called phase-change materials (PCM) based on sugar alcohols for latent heat storage and bio-hybrid fiber-reinforced plastics, plus lots more.

In the Swiss town of Dübendorf innovative materials are already being tested in practical applications. In 2016 the Swiss Federal Laboratories for Materials Science and Technology built a four-story research building there. Called NEST (Next Evolution in Sustainable Building Technologies), this building also features a module called UMAR, which was designed by Professor Werner Sobek in collaboration with Dirk Hebel and Felix Heisel. UMAR stands for Urban Mining and Recycling.

This module, which is used to live in, is the very first building made entirely from recycled materials (apart from the timber load-bearing frame). Another concept for an experimental building, to be completed in Dresden by the end of 2020, is the first carbon concrete house. In carbon concrete, the reinforcing steel is replaced by carbon fibers. This material is regarded as more durable and lighter than reinforced concrete, and it has higher strength.

It has the potential to revolutionize architecture: Because carbon does not rust, then you don´t need the thick layers of concrete that are required with reinforced concrete. That in turn saves resources, enables the use of slimmer components and, in cement production, reduces energy consumption and lowers carbon emissions.

Resilience: The best way to cope with change

While in recent decades architects and urban planners have mainly focused on energy-efficient buildings, they are now increasingly turning their attention to the need for resilient buildings and urban areas. By definition resilience means the capacity of a system to cope with change and develop further in the face of external impacts such as natural disasters and temperature change.

The more disruption a system withstands and the more easily it adapts to changed conditions, the more resilient it is. Architect and town planner Thomas Sieverts summed up the main features of resilience in the field of building: these include technological redundancy, ease of replacement of components, and decentralization. Planning that takes into account future changes is the best way to ensure resilience over the long term.

600450
bau-muenchen.com
The key themes at BAU 2021: The challenge of climate change glassonweb.com

Saudi Build 2022
The 32nd International Trade Exhibition for Construction Materials, Building & Environmental Technology, will take place from 14-17 November 2022 at Riyadh International Convention & Exhibition Center.
Siegfried Glaser, founder of HEGLA, passes away
HEGLA says farewell to their company founder, longstanding Managing Director and Executive Board Member Siegfried Glaser.
FACE 1 Tecglass Technology at Project 923 Quentin Building – New York
JETVER BASE inks range were developed by Tecglass for the world of architecture, providing excellent performance in terms of chemical resistance to the effects of weather and superior durability over time.
OmniDecor glass design | Milano Design Week 2022
OmniDecor is taking part in the 2022 edition of the Milan Design Week with an articulated series of initiatives.
Early Bird Registration is Still Open for the Facade Tectonics 2022 World Congress!
Register today with our Early Bird pricing to claim your spot amongst the industry’s most influential leaders and academics.
Joint General Assembly Meeting of GKFP, QKE and EPPA
On 12 May 2022, around 50 members, partners and media representatives came together at the Novotel in Karlsruhe for the joint General Assembly Meeting of the three associations.