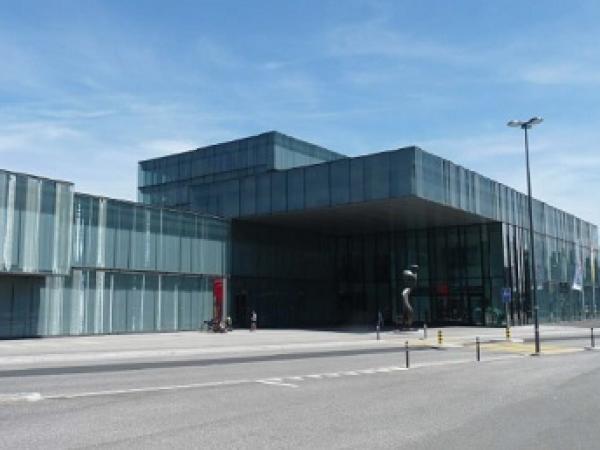 Buildings fitted with glass facades are often death traps for wild birds, particularly when they reflect a natural environment or when they are transparent, and thus invisible.

At the WÜRTH Building in Rorschach, St Gallen, Switzerland, the facade is made mainly of glass. The glass is laminated with aluminium coated SEFAR fabrics; this gives the building a special aesthetic appearance, provides shade and reduces external refl ectivity. How much the reduction in reflectivity helps to reduce wild bird collisions was examined over the course of one year by monitoring collision victims. Weekly visual inspections were made between January 2014 and January 2015. During this time no evidence of possible impacts were found. SEFAR fabrics are thus effective in preventing collisions.

The entrance area of the WÜRTH Building, as seen from Bahnhofplatz (the Station Plaza).

The collision victim monitoring was executed through optical searches and without technical assistance. When inspecting existing buildings, in particular ones of this size, we do not know of any method which, without disproportionate effort, would enable both 24 hour monitoring and, with regard to avian collisions, provide reliable results.

This report was instigated by the Swiss Ornithological Institute in Sempach, who were thus able to work fully independently from SEFAR, the fabric manufacturer. No financial compensation has been offered or accepted and so the results are fully impartial.

The south-west corner of the WÜRTH Building. Here the whole façade is constructed from glass, into which SEFAR-fabrics have been laminated.

In their natural environment birds know of few obstacles which would pose a danger to them. Their ability to recognise and avoid hard to see obstacles in their environment is thus not particularly good. In addition to this, the way they perceive their environment and manage their sensory impressions creates a different «reality» to ours: birds see in four colour channels, can process up to 180 pictures a second and can often see in the round: nearly 360° degrees of vision. As a consequence, their stereoscopic vision and thus their spatial perception is less well developed. This results in their being less able to detect obstacles such as fences, cables and, of course, glass facades. Because glass frontages either reflect the environment or are transparent they pose a significant danger for wild birds. In Switzerland alone hundreds of thousands of birds die each year from collisions with glass (Schmid 2009). Many different species are affected: the list of documented victims of glass panels in Switzerland includes not less than 130 species (Schmid, unpublished).

Modern glass facades are often complex structures. Various types of glass with varying surface finishes are built at varying distances from each other. Because of this and because, depending on the relationship between the internal and external lighting, different reflectivity and transparency conditions can arise in the same façade, the dangers to birds cannot always be fully assessed. The general rule is that for flat facades, the problems increase as the degree of external reflectivity and the fidelity of the reflected environment increase. Particularly treacherous for birds are highly reflective facades which show images of trees and bushes.

The company SEFAR AG in Heiden, Appenzell/Switzerland, has been producing fabrics which can be laminated into glass for some years. These are marketed under the product name ‘SEFAR Architecture VISION fabrics’. These fine fabrics are coated with metal on the ‘outside’ and are black on the ‘inside’. In this way interesting aesthetic effects can be produced on the external surface, while the inner surface delivers relatively good visibility and the fabric provides shade.

As this example from a factory building shows, many different bird species collide with glass.

We have been aware of SEFAR products since 2009 and have had contact with several of their representatives. SEFAR products are characterised by their ability to considerably reduce both the transparency and the reflectivity of glass. This suggested to us that the collision risks from their glass panels might be considerably less than that from normal glass panels. The construction of the WÜRTH Building in Rorschach gave us an excellent opportunity to test the effectiveness of the SEFAR-fabrics in reducing collisions. SEFAR produce a wide selection of thick and thin fabrics in different colour shades. The fabrics used here are from a ‘lighter’ weave fabric. This was a good starting point as, by analogy, a great part of the product palette can be included in our conclusions: should this, in comparison, unobtrusive product be demonstrated to reduce bird collisions, then the thicker fabrics will also do so.

Conventional building with sun protection glass: the tree reflected in the glass surface is extremely hazardous for birds.

Glass laminated with SEFAR fabrics. From inside the black fabric permits excellent visibility (left). Externally the fabric is metal coated. One of the effects is reduced reflectivity.

The WÜRTH Building in Rorschach was opened in early 2013. The building consists of a conference hall with conference rooms, a restaurant and an art museum; in addition there are office facilities, a shop and other spaces which can be used by the WÜRTH Group. The building sits in 21,500 square metres of land directly on the lakeside promenade at Lake Constance. The Neue Zürcher Zeitung [New Zurich Newspaper] said “in accordance with the competition design from Zürich Architects Gigon Guyer, a marvellous glass palace, costing 150 million Swiss francs, rose on the shores of Lake Constance. With its 150 metre length, 50 metre width and 30 metre height it has the dimensions of a container ship” (NZZ, 30.04.13). The building has a total volume of 144,400 cubic metres, spread over 5 floors.

The immediate vicinity of the building is characterised by the presence of the railway and streets; on the lakeside there is a park with some trees. Although bird diversity in this area is poor, there are still some breeding birds, such as collared doves, pigeons, wagtails, black redstarts, blackbirds, blue tits and great tits, as well as sparrows. In addition, green areas on the shore like these are, in our experience, attractive stop-over sites for migratory birds. Surveys of breeding pairs or migratory birds during migratory periods were not made.

Close up of the facade of the WÜRTH Building in bright sunshine.

The WÜRTH Building is located on the promenade of Lake Constance in Rorschach.

Following initial discussions with various volunteers of the Swiss Ornithological Institute and with SEFAR, it was agreed that Kuno Feurer, president of BirdLife Goldach, in Canton Saint Gallen, would perform the inspections. Between 17 January 2014 and 13 January 2015 he performed weekly checks: in total 52. The controls were made optically by checking the ground outside the building for possible collision victims, feather remains or collision traces. Each check took between 30 and 60 minutes. Whilst collision victims are often eaten by crows, magpies, seagulls, cats or martens and thus frequently vanish quickly, collision traces often linger for weeks.

First visit for Kuno Feurer and Jérôme Lugrin, representative of SEFAR. The asphalted surfaces around the building facilitated the discovery of potential victims.

Due to the dimensions of the building it was not possible to check every façade minutely for collision traces. However, victims and feather remains would have been swiftly discovered on the predominantly asphalted surfaces surrounding the building. Andreas Schoenenberger (Team Leader Facility Management WÜRTHForum) supported the inspections by ensuring that possible bird casualties found by the maintenance staff were reported to Kuno Feurer.

The results: there was no evidence of any collisions found, either from the 52 inspections or by the maintenance team. In the immediate vicinity of the building Kuno Feurer saw around 15 different species of birds. The most common species were: ravens, sparrows, wagtails, blackbirds, blue tits, great tits and pigeons. Sparrows and blackbirds were also found nesting in niches between the floors of the building.

Collisions usually leave traces. Bodies or feathers on the ground, or feather remains or prints on the glass panels: these are typical of pigeons (feather powder).

Over the course of one years’ weekly inspections, no evidence of bird collisions was found on the glass facade of the WÜRTH Building in Rorschach. The whole building could not be checked thoroughly each week; however, from our experiences with other buildings, we know that collision traces should have been found on the glass façade in this period, had there been any. We therefore conclude that glass facades fitted with SEFAR® Architecture VISION Fabric AL 140/70 may be assessed as bird friendly. The aesthetic effects and the shading-system provide further positive points, which distinguish these glass panels from other glass products.

SEFAR® Architecture VISION Fabric AL 140/70 is one of the more open fabrics available in this product palette. All the denser fabrics should provide at least as good protection. It is not possible to deduce whether more open fabrics might also reduce collisions.

On the basis of in-situ visual checks we surmise that the fabric functions as follows: the fabric reduces reflectivity, particularly where transparent panels have dark or unlit rooms behind them. The lighter the metal coating on the fabric, the more the reflectivity is reduced. The reflection also loses definition as a result of the inbuilt fabric: for example, tree shapes become less clear. This is important because, as the examples of strongly coloured sun protection glass show, an ‘unnatural’ colour is insufficient to prevent collisions, if the panels continue to reflect sharp images.

Reflections are clearly visible, however the effect of the fabrics is to reduce their clarity.

Double effectivity: glazed corners become opaque and thus are much less hazardous. Birds see through transparent building corners, which is why they often attempt to fly diagonally through them.

Buildings with glass facades using denser fabrics, such as the SBB [Swiss Railway] Head Office in Bern, pose no danger for birds.

A further effect of the fabric laminated glass panels is that extra panes of glass positioned behind them do not increase refl ectivity, as is usually the case with multiple glazing.

We would like to thank the WÜRTH Building Facility Management in Rorschach for their friendly support, in particular Mr Andreas Schoenenberger (Team Leader, Facility Management WÜRTH-Forum). Mr Jérôme Lugrin from SEFAR supplied us with valuable basic information and diverse technical advice. Daniela Heynen, Head of Department at the Swiss Ornithological Institute, read the manuscript and made many important suggestions.

600450
www.sefar.com
WÜRTH Building in Rorschach - An Examination of the Bird-friendliness of the SEFAR Fabric Laminated Glass Façade glassonweb.com

Fabrication Technology for Composite Glass-metal Panels
Following a short overview outlining key design objectives, the fabrication process of an opaque composite glass panel is described in detail.
Another Engineer Imagines | by Mic Patterson
When I first met Sophie Pennetier, I was struck by her expressed influences and her remarkable experiential pedigree. She cites Peter Rice’s brilliant book, An Engineer Imagines, as the inspiration for her engineering pursuits.
Recent Trends in Architectural Design of Light-permeable Facades
Contemporary architectural transparency (understood as the optical property of the material) is constantly being redefined and, over the last decade, new design trends have developed related to transparent façades in architecture.
Smart Glazing in Intelligent Buildings: What Can We Simulate?
The integration of smart glazing and adaptive façade in buildings can lead to large performance improvements and added functionality compared to conventional static building envelope systems.
Potential of Structured Switchable Glazing*
The performance of the glazed sections of the facade is essential for providing the maximum possible comfort for the building occupants, while minimizing the energy and resource demands of the building.
Haze, Anisotropy, Clarity and Interference Effects (HACI) Evaluation
As a manufacturer and supplier of monolithic, laminated and insulated glass panels, we often produce larger panels that must use heat-treated components, ionoplast interlayers and multi-layer assemblies.