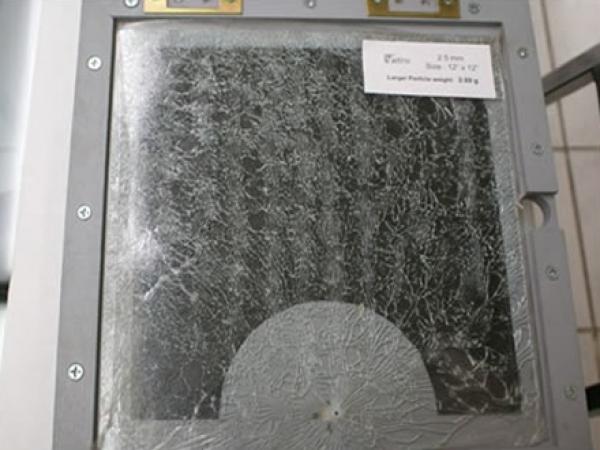 Advantages of the use of Radio Wave energy in the forming of glass and of tempering thin glass of less than 3.00mm. Some of the inherent problems in the conventional thermal tempering of thin glass are also presented.

The means to control and to apply the RW energy to assist in the thermal tempering process is discussed in detail.

Existing thermal tempering process: Normally the body of the glass panel will have to reach a softening temperature of about 660 º C in the case of Soda Lime glass - this temperature will vary with the composition of the glass - before quenching operation starts. The quench which is usually done with forced air on the glass surface, extracts heat at a rapid rate to freeze the outer surface while the inner portion is still soft.

As the cooling continues, the thermal contraction of the inner portion creates a strong compressive stress on the frozen outer surface while a tensile stress is induced on the inner portion. The resulting panel is said to be heat tempered.

Figure 1 illustrates a typical tempering process sequence and one of the physical difficulties that arise from the required 660º C for the start of the quench operation. Referring to figure 1, the glass is heated in a conventional oven (1) and then it is transferred to a chamber (sec.3) where it is shaped (if required), and then it is transferred to a separate chamber (sec.4) for the quenching operation. At this location the glass needs to be at a minimum of 660º C.

However, the glass looses its temperature very rapidly (as much as 25 Deg/Sec. in thin glasses of less than 3.0 mm thick) before the quenching can start at section 4 The conventional solution to overcome this loss in temperature is to super heat the last zone of the preheat oven (sec.2) by as much as 50 to 100º C., and passing the glass through this zone at a rapid rate.

This strategy makes use of the glass property that during a rapid rise in glass temperature, the viscosity of the glass lags behind. However, in the case of glass thinner than 3.0 mm, this solution is found to be inadequate.

The thermal history of the glass is given in more detail in figure 2. Section 1 shows the pre-heat portion of preparing the glass for the tempering operation. Section 2 describes the additional rise in temperature required in the pre-heating section to compensate for heat loss during the transfer to the quench area. Section 3 indicates the actual temperature loss of the glass panel before the quenching starts in section 4.

The section 2 and 3, which represent the transfer area in fig 2, is where the physical difficulties (earlier mentioned) reside.

At temperatures higher than the 660 º C which is required for the start of the quench in section 4, the viscosity of the glass drops very rapidly and the physical handling of the glass tends to distort the panel. This problem becomes even more severe when the panels are “thin” such as below 3.0 mm thick. Shown in Fig 3 is textbook data (Alexander Fluegel – 2007) of the drop in viscosity of Soda Lime glass during the temperature range of our concern.

It shows in the Log scale that the viscosity actually drops by a factor of more than three between 600 and 660 º C. It is this extreme drop in viscosity that presents a severe processing problem as this soft glass has to be transported from the heating zone into the quenching zone without inducing any optical distortion.

At this lower temperature, approximately 650 º C the glass is pliable enough to be shaped but stiff enough to resist distortion from normal transfer handling. This relatively cold glass of about 650 º C, (preferably between 620 and 650 º C) is then transferred to the RW oven (Section 4).

Fig. 5 presents a detailed thermal history of the new system. Section 1 represents the pre-heat of the glass in a conventional oven. Sec 2 shows the glass forming operation at about 650 º C. Section 3 shows the Glass being heated up to the quenching temperature of 660 º C using RW energy.

The RW energy is preferably applied at about 20 Mega Hertz. At this frequency, the apparatus is commercially available and has a proven record of plant safety.  It is used extensively for example, in moisture extraction application in food and paper processing industries. The section 4 shows the quenching operation.

Fig 6 shows one typical configuration of the electrodes inside a RW chamber.

The two beams of electrodes, the positive and the negative are placed close to the glass and across the width of the glass to provide maximum exposure to the RW field that exists between the two terminals.  Air blowers are provided above and below the glass to quench the glass when the required temperature of 660 deg C is reached.

The timings (as to when the heating stops and cooling starts) are controlled within fractions of a second. The glass is supported on rollers that consist of ceramic rings specially designed for the RW application.  The rings and the rollers allow free flow of air, essential for the quench process.

One additional feature of the process is described in Fig 7. In this feature the glass at a convenient temperature of about 630 º C (Between 620 and 650 º C) is transferred from the pre-heat section to a set of rollers. The rollers are arranged in an arc representing a radius to which the formed and tempered glass is meant to adhere.

Typically for example, some automotive door glass requires a 30” radius. After the glass arrives at this location the RW energy is activated and the RW as described earlier heats the glass to about 660ºC. At this temperature the glass begins to “sag” into the arc of the rollers. At the appropriate time the quench air is turned on to temper the panel.

(Note: The author has noted that the glass when heated at a rapid rate with RW energy, does not exhibit the same sag/slump behavior usually expected when the glass is heated at the same rate by conventional methods such as radiation, convection and conduction. For example, when the glass is heated by RW at the rate of 10 º C per sec, it tends to sag almost immediately when the softening point is reached. Additionally, RW heating seems to allow for a high level of tempering stress to be developed, even with conventional air quench after a rapid rise in temperature, up to the softening point. The author suspects that the RW heating of glass is able to vary the viscosity of the body of the glass in unison with the rise in temperature even when the glass is being heated at a high rate. This behavior appears to be contrary to observations from conventional heating methods.)

Another feature of this process is applicable to large commercial window glass of the category “Thick Glass’, usually in the range of 6.0 to 10.0 mm in thickness.  These glass panels present a unique problem to temper them since a large temperature gradient is introduced along the length during the transfer from the pre-heat to the quench chamber.

For example, as shown in Fig 8 the electrodes are placed to selectively heat the leading portion of the glass at a higher rate than the trailing portion. By varying the distance between the two electrodes the intensity of the RW field that is applied to the glass is varied.

This results in the leading end of the glass receiving more RW energy and its temperature gets closer to that of the trailing end .This also results in energy savings at the pre-heat section of the process.

One of the most significant advantages of the RW tempering process appears to be in its application to “Thin” Glass. While conventional process approaches its limits at 3.0 and 2.9 mm glass the RW process appears to be capable of tempering glass down to 2.00 mm or less in thickness. 12 x 12 inch (300mmX300mm) glass panels of various thicknesses were tempered at the Vitro Central Glass Technology laboratory.

Some of the results are presented here. Fig 9 shows a photograph of the break pattern of 2.70 mm thick glass along with the maximum particle size. Similar pictures are shown in Fig 10, Fig 11, Fig 12, and Fig 13 of glass thicknesses down to 2.00 mm.

In conclusion, the proper means of exposing the pre-heated glass to a high flux density of controlled RW energy field allows very thin (< 2.00 mm) glass to be tempered. The ability to temper thin glass such as 2.0 mm or less is expected to have an enormous impact in the flat glass industry in terms of the need for raw material, energy consumption at the melting furnace, transportation density of glass panels, weight reduction of tempered window panels etc.

The very thin tempered glass is also expected to assist Photo Voltaic Cell industry in their quest for more durable and lighter panels with higher light transmission. Yet another area of application is in the fabrication of light laminated panels with very high impact resistance. The even more exciting part of this process is that it can be added on to most existing glass forming and tempering equipment.

Counting of Fragments in Tempered Glass Fragmentation Test
The fragment count in the standardized fragmentation test in the standard EN 12150-1 is the way to define the safety level of tempered glass and a way to also get an indication about the stress and strength level of the tempered glass.
Glass Coatings Useful for the Prevention of Bird Collisions
It is estimated that 100 million to 1 billion birds a year perish due to collisions with glass.(1-2) In North America, some communities have enacted legislation aimed at protecting birds by calling for the design and installation of birdsafe glazing.
Adaptive Façades Systems made from Thin Glass
Façades play an important role in the control of energy flow and energy consumption in buildings as they represent the interface between the outdoor environment and the indoor occupied space.
Thin Glass Concepts for Architectural Applications
This contribution is an excerpt of the journal publication by Louter et al. 2018. It explores the potential of thin glass for architectural applications and reports on two thin glass concepts.
Structural Use of Thin Glass. Design of a Transformable Curved Greenhouse.
New generation thin, lightweight and damageresistant glass seems to be the optimal material for extremely deformable structural elements for façades and building skins.
Load-bearing behaviour of Innovative Lightweight Glass-Plastic-Composite Panels
Researchers and engineers search for solutions to achieve transparent lightweight structures combined with high structural performance. 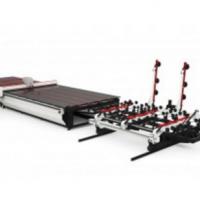