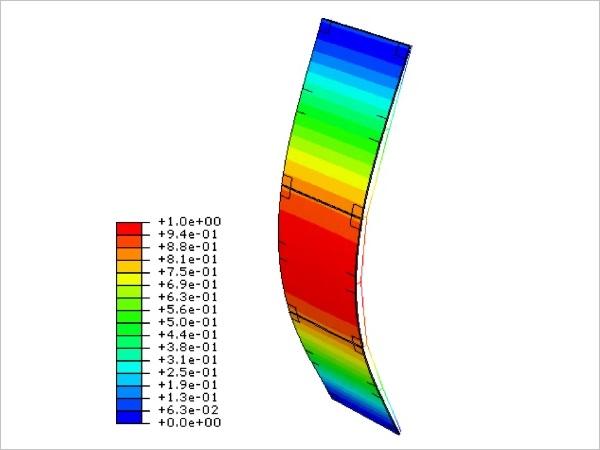 Cable supported glass façades are sensitive to wind action because of their flexibility. Conventional laboratory testing to check a façade reliability under the wind action is generally carried out by uniformly air pressure tests. However, the typical wind action on a surface is known to be not uniform because it varies due to building aerodynamics and wind flow turbulence, and this aspect should be properly considered for testing protocols.

This paper discusses the structural response of cable-supported glass façades, through time history finite element (FE) analyses, under different wind action combinations that varies based on the building aerodynamics (plan shapes and roof curvatures), the wind direction (0° and 90°), and the glass panel position (up and down). Such a finding is further enforced by the presence of flexible supports for the constituent glass modules. The presented results show a strong dependence of the structural response on the wind action configuration, and thus suggest the need of new testing protocols for similar systems.

The increasingly use of glass for load-bearing applications in buildings and infrastructures proved to represent an open issue for structural designers (Bedon et al. 2018). On one side, novel boundary and restraint applications make the use of glass in buildings extremely versatile, compared to other constructional materials. On the other, several safety issues are still related to tensile brittleness and typical size effects for building applications, under various loading conditions. Among others, wind effects for façade systems are responsible of stress and deflection peaks that should be properly limited, and even minimized, depending on the mechanical and geometrical features of the system object of study (Bedon et al. 2018).

In most of cases, glazing windows and façades represent a highly fragile and vulnerable component for buildings, given that they are expected to act as physical barrier under a multitude of design actions. For this reason, several studies have been spent for the analysis, assessment and even optimization of several solutions of practical interest for design, such as façades in tall buildings (Ding and Kareem 2020) which are most sensitive to wind pressures. Design criteria for façades under wind actions have been elaborated and discussed in Simiu and Hendrickson (1987), Overend et al. (2007), Brewer and Sammarco (2018).

The potential and feasibility of fragility curves in support of efficient and conservative design of glass façades under wind pressure has been addressed in Lima-Castillo et al. (2019). Complex mechanical systems in which glass panels are braced by cable systems have been investigated in Yu et al. (2017). A smart control system for cable supported façades under wind or even blast has been proposed in Santos et al. (2014, 2016), to prevent extreme stress peaks in glass components under dynamic events. The wind induced displacements were estimated by Rizzo et al. (2021) based on a numerical model calibrated towards full-scale laboratory experiments.

It was observed that the wind action estimated by wind tunnel tests affects the façade structural response closely differently than laboratory air pressure tests commonly used to check the façade reliability. Results discussed by Rizzo et al. (2021) proved that the wind-structure interaction in the field of the glass façades should be investigated carefully to avoid air infiltration and undesired torsion in the supporting frame members. In the present paper, the attention is still focused on façade glass panels under wind pressure. Compared to literature studies, however, major efforts are spent on the characterization and analysis of wind effects based on original experimental pressure data.

Further, the analysis is focused on a special typology of cable-supported façade systems. More in detail, the case-study curtain wall explored in Amadio and Bedon 2012a, b, c) is take into account and adapted to the present investigation. Based on efficient but refined finite element (FE) models developed in ABAQUS (ABAQUS computer software), a set of twelve non-linear dynamic analyses is carried out with the support of twelve time histories of wind pressure. Typical wind effects and façade behaviours are thus assessed from parametric analyses. Based on simple preliminary calculations, the effects of boundaries for such complex mechanical systems are also analysed in terms of corresponding performance indicators for design

The purpose of this paper is to discuss the windstructure interaction for glass façades to alarm codifiers and sway the scientific community on such a sensitive issue. The thesis supported is that the static air pressure tests reproduced in laboratory to assess glass façade against wind pressure are not reliable because the wind action is a dynamic force, and its time-depending effect should not be neglected (Rizzo et al. 2021). For the present study, more in detail, the wind action is estimated by wind tunnel tests on buildings covered with a hyperbolic paraboloid roof.

The building prototype represent a sport arena and it was supposed to have very large and tall glass façades on the perimeter. The pressure coefficients on the lateral surfaces are estimated in wind tunnel for different wind angles and for different plan shapes. A special care is then given to the comparative investigation of wind–structure interaction on zones close to the flow detachment edge and on zones that are far away from the edges.

The novelty of this paper consists of a discussion on the structural response of cable-supported glass façades under a dynamic action induced by the wind, and as far as the authors know, there are no comparable scientific publication on this issue.

To this aim, Sect. 2 summarizes the façade geometry and mechanical characteristics, with evidence of some basic preliminary considerations, while Sect. 3 discusses the reference wind tunnel experimental setup and the wind action calculations that are used for timedependent non-linear analyses. Numerical simulations are thus presented in Sect. 4, while Sect. 5 discusses the main results.

MICA (Monitoring Internal Comfort Application)
A new BIM tool processing IEQ data input for building management and energetic optimizations
Comparison of Behaviour of Laminated Banister Panels with Embedded Connections
Within this research, two sets of real-scale laminated banister panels with the embedded connection were tested.
Examination of the Load-Bearing Behavior of a Bonded Edge Seal for Fluid-Filled Insulating Glass Units
This paper presents a study on the development of a bonded edge seal for fluid-filled insulating glass units.
Sound Insulation of Façade Element with Triple IGU
In this research, the structural sealed façade structure with triple IGU was investigated and the effect of the thickness of ordinary and laminated glasses.
Non-Contact 3D Characterization System of Scratch-Induced Surface Damage on Monolithic Glass Panel
This study aims to develop a non-contact stage-wise scanning method to extract 3D damage characteristics on glass surface, which can further facilitate the investigation into the associated influences on the flexural strength of glass.
High-Temperature Behavior of Silicone Sealants
This paper reviews the high-temperature behavior of a selected range of silicones used for sealing and bonding in construction. 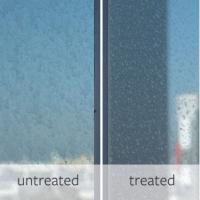