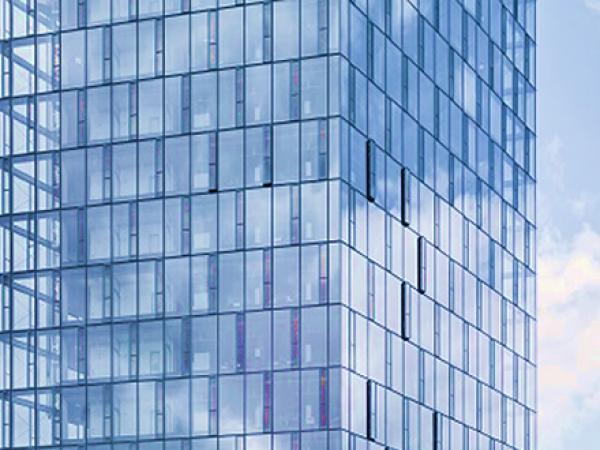 Modern, transparent and prestigious – large glass façades are very much in vogue for office complexes and industrial buildings.

Yet their use only makes sense in terms of energy savings and cost effectiveness if they also have air-conditioning functions and help the energy supply. The glass industry is therefore keen to promote the development of multifunctional windows and façade elements – an area where it has already achieved numerous promising innovations.

Architects and engineers are currently facing major challenges. In modern architecture there is an increasing demand for glass façades that add brightness and which make the building look more prestigious. According to forecasts, as many as 1.33 billion square metres of new façades will be in place by 2021. This is roughly the area of Greater London.

However, there is a problem: During the summer months, in particular, a building encased in glass needs a lot of energy to keep the inside temperature at a reasonable level. Air conditioners are dreadful energy guzzlers and largely responsible for buildings producing around 40 per cent of all carbon emissions in the industrialised countries.

Anyone planning to use glass therefore needs to install additional functions that create both shade and air conditioning. This is all the more important as fewer and fewer emissions are permitted under international climate protection targets.

The member states of the European Union, for instance, have agreed that from 2020 any energy requirements of new buildings must be almost zero for heating, hot water, ventilation and air conditioning and that any additional energy requirements must be met by facilities within the building itself. This is where multifunctional façades can be helpful.

“Even in the past many elements already formed part of the façade, such as various control functions and sun protection. In the future we will see further functions being added,” says the architect Stefan Behnisch from Stuttgart. He mentions lighting elements, heat exchangers for the production of solar heat and also mechanical ventilation and aeration elements.

At the moment such façade systems are not standard yet. Façades are still very much seen in terms of their individual components which are developed by different manufacturers. Planners therefore need to spend a lot of time and effort combining those components. However, this will soon change, as industry and research have understood this need and are now focusing more closely on the development of integrated solutions.

“All façades follow a consistent physical pattern, even when conditions keep changing, both indoors and outdoors,” says civil engineer and architect Werner Sobek, head of the Institute of Lightweight Design and Construction at the University of Stuttgart. “What everyone would really like to see is a façade that can adjust itself at the flick of a switch, so that it adapts to circumstances, both inside and outside.”

We can have a foretaste of future architecture when we look at some building projects that are already in existence, such as the 67-metre Festo Automation Center with its 16 floors in the southern German town of Esslingen. The building was officially inaugurated at the end of 2015 and is based on an ingenious energy scheme.

Its glass façade, which covers 8,500 square metres in all, can be described as an exhaust air façade where the air is continually siphoned off between the inner anti-glare shield, the aluminium components of the unitised façade and the glazing. This means that the heat of summer cannot penetrate to the inside of the building in the first place, thus reducing the need to cool down.

Further light and heat protection in the new Festo building is created with the help of so-called electrochromic glass which can be dimmed as required, blocking off sunlight. In all, 441 so-called sandwich panels have been installed, covering a total area of 1,000 square metres. Inside they are gently covered by an extremely thin layer of tungsten oxide nanoparticles.

Whenever voltage is applied, the panels turn blue, thus reducing the level of translucence. At the Automation Center this is handled automatically by the facility management system in response to a signal from sensors, although it is also possible to take manual control, via a button or touchscreen.

The East German manufacturer, Econtrol-Glas, says it takes 20 to 25 minutes for the system to switch from the brightest to the darkest colour. When dimmed, only 12 per cent of sunlight can get through, while the rest is reflected back by the particles.

Econtrol-Glas has so far equipped as many as five European projects of a similar size, totalling 15,000 square metres of switchable glass. And the demand is rising. “There’s a greater awareness of energy-efficient buildings now,” says CEO Hartmut Wittkopf.

Commenting on the economic efficiency of electrochromic glass, he says that although such glass is more expensive to buy compared with conventional insulation glass and although additional electricity is required for the switching function, the investment nevertheless pays off.

This is because the light and temperature management creates a substantial improvement in energy efficiency, without the need for external shading such as blinds. “We reckon,” says Wittkopf, “that, on average, Econtrol-Glas breaks even after four to six years.”

Econtrol-Glas is not the only company that offers electronically dimmable façade elements. The same technical principle is applied by Sage Saint-Gobain whose glass is sold, for instance, as dynamic glass by the façade specialists Schüco.

The German science and technology group Merck follows a different option in switchable glass. Working together with its industry partners, the company is currently testing window panes which can respond even faster to changes in lighting than similar switchable glass solutions. To do so, Merck uses a mixture of liquid crystals – the kind that is also used for TV, laptop and smartphone screens.

“This enables us to adjust the intensity of incoming daylight within seconds and to create a wider diversity of colours,” says Martin Zitto, Business Development Manager at Merck. Even though the technical basis differs from that of other switchable glasses, the operation of liquid-crystal glass is similar, as it involves a mixture which fills the space between two bonded glass panels.

The crystals can be arranged in different ways through the application of voltage. Depending on the arrangement, more or less light can get through the coating, making the window more or less transparent.

However, liquid crystal panes are not yet available on the market. They are currently being produced in small numbers by Merck’s subsidiary Merck Window Technologies in the Dutch town of Eindhoven, to show how the idea can be implemented in production. Merck is now hoping to attract companies that will translate this technology into commercial manufacturing.

“Our expertise,” says Zitto, “is more in the development of the chemicals, and not production.” However, it seems that Merck is doing well in its quest for interested parties. The first products, says the manager, may even be available at the end of 2017.

Another company that is aiming at late 2017 is the Seele Group which wants to start selling its Iconic Skin around that time – a modular system of opaque glass façades. Seele’s glass sandwich panels, which are specially designed for offices and industrial buildings, involve the use of a multifunctional component that integrates all the necessary functional and support elements.

Iconic Skin combines several efficiency benefits at the same time. Firstly, according to Seele’s Marketing Manager Christine Schauer, it is designed as a highly heat-insulating component, with a heat transfer coefficient (U-value in W/m²K) of only 0.15 to 0.47. This means that very little energy is required for heating or air conditioning.

Secondly, its production costs are relatively low, thus bringing down the price of a glass façade to a reasonable level. And thirdly, Iconic Skin offers plenty of leeway in the design, as it allows a length of up to 16 metres, can be installed either horizontally or vertically and permits a variety of printing options.

glasstec 2016 in Düsseldorf, the world’s biggest and most international trade fair for the glass industry, is held from 20 to 23 September 2016. It offers opportunities for a close look at the innovative products of façade specialists and for information about key trends in the industry.

Seele’s new glass façade, too, will be among the exhibits of a special show called glass technology live, organised by the University of Stuttgart. Using large-format façade mock-ups and one-to-one models, the exhibition will showcase the latest developments in façades and energy. This year’s special emphasis will be on energy efficiency and heat insulation.

Directly next to glass technology live, visitors will find the Glass & Façade Competence Center. The thematic focus of the centre will be on glass for façade planners, construction engineers and architects. The exhibitions will be accompanied by talks at the International Architecture Congress with detailed expert presentations of the exhibits and of current trends in façades.

But the events at glasstec 2016 will also feature forward-looking concepts for building envelopes that are not yet available on the market. Glass façades that automatically adjust to lighting conditions and siphon off hot air are merely the beginning. Future solutions are set to integrate solar technology even more closely, producing heat and electricity which can be stored directly on site, using batteries and heat storage units.

This means that energy will become available even when the sun is not shining – a basic requirement for buildings which are to obtain energy as independently as possible from their own sources, without any external energy supply.

Thanks to technical progress in photovoltaics and in lithium-ion batteries as the preferred storage medium for solar power, it is reasonable to expect a breakthrough in power-generating façades in the very near future. For instance, Heliatek in Dresden and the flat glass manufacturer AGC Glass Europe in Belgium are currently working on solar elements which integrate organic photovoltaic films in different dimensions and in different shades of colour and transparency for use as architectural glass.

Thanks to such films, says Heliatek, the various elements will be easier to handle and easier to integrate into façades than today’s solar modules which are based on relatively large silicon solar cells. Heliatek says there is great interest among the construction industry in setting up pilot projects based on the new solar elements.

glasstec 2016 in Düsseldorf gives companies an opportunity to exchange ideas on new technologies and to initiate cooperation ventures, thus ultimately paving the way for energy-efficient buildings.

The TVT Glass Pavilion
Theoretical Study on a Highly Transparent Building Made with Long-Spanned TVT Portals Braced with Hybrid Glass-Steel Panels
Serrated Glass Facades: the Influence of Façade Morphology on Aesthetic Quality
Serrated building envelopes are a very eye-catching element of contemporary architecture. This type of façade in plan resembles the edges of a serrated blade, hence the name.
Can glass help limit climate change?
Limiting global warming require “rapid and far-reaching” transitions in land, energy, industry, buildings, transport, and cities.
The Aesthetics of Color in Architecture Glass Facades
Research deals with the effect of using color in aesthetic taste of architectural interfaces as one of the most important problems affecting the architectural form.
Glass Constructions Under Extreme Boundary Conditions
Constructions at exceptional locations are often challenging but worth one’s while. Extreme boundary conditions and sophisticated demands of the client have to be considered.
Glastory: Solar power – a new frontier for glass
A clean, safe and sustainable source of energy, solar continues to power the world at a faster pace than ever before.