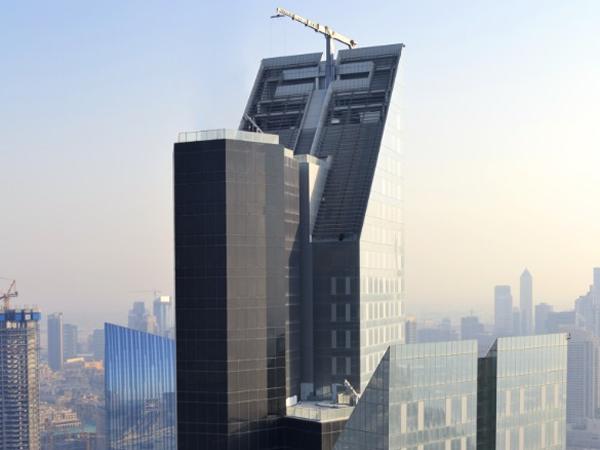 With the number of high-rise buildings increasing, the demand for safe facade access is at an all-time high. But, what are the options? And which one do you choose for your specific building? 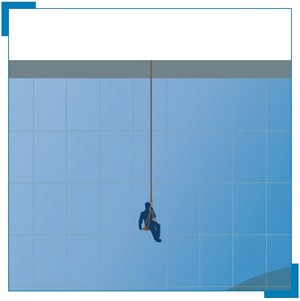 A Bosun’s chair (or boatswain’s chair) is a short plank that is used to suspend a single person from the roof or another higher level, and abseil alongside the facade using a rope. They are a relatively quick way to gain access to a facade and require little investment.

However, Bosun’s chair users need to be well-trained to operate the facade access solution. Due to the manual proceedings needed to operate the system, the risks are high. This is why workers qualified to use Bosun’s chairs are relatively more expensive than workers using a suspended platform system or BMU.

Because a Bosun’s chair is used by a single person, the work area is no bigger than the user’s reach. This is fine when a facade is narrow and the maintenance interval is low, but when a facade is wide and requires maintenance regularly, multiple workers need to be hired. Because hiring qualified Bosun’s chair users is relatively more expensive, this can become a costly operation.

Another challenge can be found in the complex shapes facades come in. A Bosun’s chair is most suitable for straight facades. A worker can move up and down the facade, but horizontal travel during a descent is next to impossible. Unless the chair is disconnected and the anchor point is moved along the roof edge.

Due to the introduction of new standards for the general industry by OSHA this year, there is also a height restriction, limiting its use to 300 feet. Furthermore, restraint of the system is required when vertical travel exceeds 130 feet. 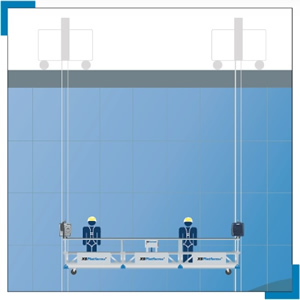 A system where a suspended platform (also known as swing stage or suspended scaffold) hangs alongside the facade of a building.

It hangs suspended on Davit arms, outrigger beams, parapet clamps or another form of anchorage.

Two hoists installed on the platform can be operated by the user in order to travel vertically alongside the facade.

Suspended platform systems may only be operated by qualified persons. Using the system is relatively easier than the above mentioned solution and therefore brings less risks.

Platforms can vary from 3 to 52 feet long and two persons can perform work simultaneously. This means a large area can be covered in one vertical travel and work can get done relatively fast. However, to move the system horizontally, the platform has to be detached from the anchor.

After both components have been repositioned, the system needs to be certified by a competent person again. Completely accessing a large facade can be become a time consuming process this way. Also, this facade access solution is not very suitable for inward or outward sloping facades. 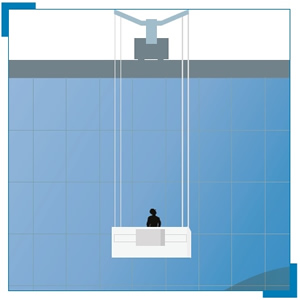 A Building Maintenance Unit is a permanent system that comes in various forms and applications. Common solutions in this category are overhead trollies (monorails), traversing roof cars, telescopic booms or a combination of the latter two.

Suspended from the aforementioned, is a gondola which is fitted with a control box to operate the system. A BMU is an ideal solution to maintain tall and wide facades, because the gondola can move vertically as well as horizontally while hanging suspended.

Because it’s a permanent solution, the system only needs to be serviced and certified once a year. Although users still need to be trained properly, there is no installation knowledge required which lowers the risk of incidents happening.

This facade access system can be customized to meet specific demands of more complex buildings that have inward or outward sloping facades, twisting facades or facades with protruding elements for example.

These customizations can include rotating booms, extending gondolas and the use of soft rope systems, among other things.

Besides that, the machine can be made to blend into the design of the structure by hiding it from sight when in parked position. This way, the aesthetical value of the building is not affected.

Placing a BMU on an existing building is a big investment. But costs for workers are lower, so on the long run savings will be made maintaining a large facade area in comparison with using (multiple) Bosun’s chairs or suspended platform systems.

The Performance of Vacuum Insulating Glazing Units Subjected to a Soft Body Impact
The goal of this work is to investigate the mechanical performance of VIG’s subjected to soft body impact and gain insight into the failure mechanisms of the VIG when exposed to dynamic loads.
Performance of cable-supported glass façades under time-depending wind action
This paper discusses the structural response of cable-supported glass façades, through time history finite element (FE) analyses, under different wind action combinations.
Adhesive solutions for cast glass assemblies
Ground rules emerging from built case studies on adhesive selection and experimental validation.
Differentiation in Architecture by Professional Designs and New Materials
The economy globalizes. The industries concentrate. The productions become uniform. Cultural specificities disappear. About architecture and glass in architecture, it is the same phenomenon.
Carbon Neutral Silicones in Façades – a window of opportunity
Dow has a strong commitment to sustainability and recently introduced the first externally PAS2060-verified carbon neutral silicones for façades.
Building-Integrated Photovoltaics Moves from the Niche to the Mass Market
Industrial manufacture of solar building components and their integration into the building planning process