Mountains and rivers decorate the Country, the Silk Road promotes the sports spirit

Luoyang Olympic Center covers an area of about 731.5 mu and is located in the demonstration area of YiBin District. Luoyang Olympic Center is a supporting stadium for Luoyang City to undertake the 14th Provincial Sports Games in 2022. It is designed and constructed according to the standards of Grade A sports stadiums. It is a provincial and municipal key project built by Luoyang City Development Investment Group and it is also a large-scale stadium project in Luoyang since the founding of the People's Republic of China.

The glass of Luoyang Olympic Center project is provided by Luoyang NorthGlass. The project adopts double silver Low-E laminated composite insulating glass, double silver Low-E tempered insulating glass and laminated glass. When the “pure flat without spot” double silver Low-E is formed, each point is coplanar, forming the final pure flat characteristics, greatly improving the flatness, and maintaining the glass permeability characteristics. The NorthGlass high-performance double silver Low-E film system not only enriches the color of the glass, improves the appearance of the building, but also greatly reduces the heat exchange of the indoor and outdoor environment through the glass, improves the thermal insulation performance of the outer window, and really achieves warm in winter and cool in summer.

The overall design concept of the project is “mountains and rivers around the country, and the Silk Road promotes the sports spirit”, extracting peony and elements of the Silk Road for display, forming a spatial pattern of “one ring, two axes and four parks”, showing the ancient charm and new style of Luoyang city as the eastern starting point of the “Silk Road”, and depicting the sports spirit of climbing new heights.

Inside the site with the “ribbon” shape set the landscape pedestrian passage connecting each building, easily and quickly connect each stadium. At the same time, it combined with the central axis water system landscape to create a green and pleasant walking rest space.

After the overall development, construction and operation of the project, it will promote the development of the new urban pattern and become a new name card to show the influence of the ancient capital of Luoyang. Luoyang NorthGlass takes quality and innovation first, let the landmark buildings inlaid with NorthGlass to rise in the Central Plains, and gradually build a new benchmark of glass deep processing based on the central and western radiation of Henan.

R.C.N. Solutions: Laminating Project for Dubai Takes Shape with a First Shipment
There is a lot of excitement at RCN for the first shipment of an important laminating project, including a special layout for a glazier company located in Dubai that needs to laminate large glass sizes.
SOLARBAN® 70 Glass Saves Energy, Protects Against Hurricane-force Winds, and Provides Stunning Vistas atop Pikes Peak
The newly constructed Pikes Peak Summit House visitor center in Cascade, Colo., was designed to provide a seamless, immersive visitor experience.
NorthGlass has created the Grand Canal Culture Museum with ingenuity
The project adopts 7 layers of 15mm low iron SGP laminated glass, with a maximum size of 12m and the each glass weight about 5.6 tons.
Gimav is going to Glass South America 2022
A strategic appointment to strengthen ties with South America and reaffirm Made in Italy in the world
Stratobel – Explosion on Demand
An adequate and reliable design of the building structure is today more than necessary.
Hegla TaiFin: Batch optimisation together with Hegla Hanic
To optimally leverage the production resources of a tempering furnace, the bedload must strictly comply with production and quality requirements. 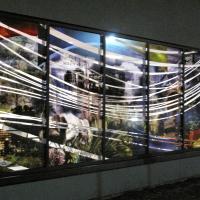