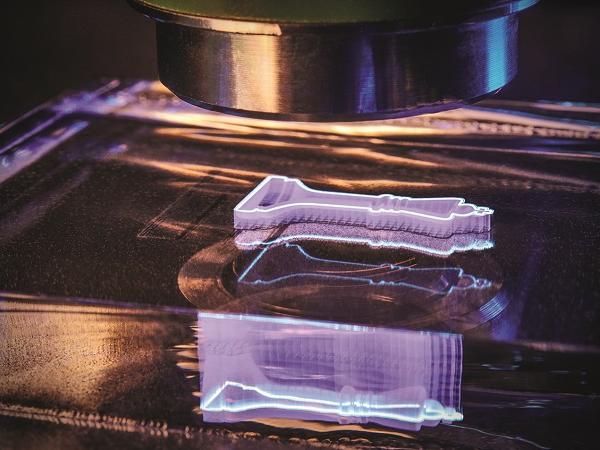 The Fraunhofer Institute for Laser Technology ILT is developing a technology that – with refractive and diffractive optical elements – gives laser beams a form optimally adapted to the respective task. In addition, the applications go far beyond separating glass: In the future, head-up displays for the automotive industry will also be produced.

The smartphone displays raised the question of how round shapes in tempered glass can be separated, both quickly and easily. The question has significantly advanced the development of laser systems for ultrashort pulse (USP lasers). For glass can be modified with these pulses and be broken along virtually any contour without releasing residues.

The laser pulses do not scratch the surface, but generate small mechanical stresses inside the material volume, which result in a clean edge when the material is separated. For this, however, a special intensity distribution is needed in the laser beam, with a long beam waist and a steeply sloping intensity profile.

How are customized laser beams developed?

Modern diffractive optical elements (DOE) can shape light into almost any desired shape. Thanks to their diffraction structure, the laser beam can be adjusted precisely. Thus, special beam profiles or complex patterns can be generated from a single beam. Alternatively, the DOE distributes the energy of a single beam to a whole array of similar partial beams.

Complex diffraction structures are a special feature of DOEs. Developing such hightech optics begins at a computer: There, scientists calculate tiny phase patterns, which produce the desired beam distribution. Using a programmable spatial light modulator, they then test the calculated structures with pixel-based phase adjustments and analyze the generated beam with a microscope.

After a few iterations, the optimal structures of the DOE are lithographically inscribed in glass. As pure glass optics, DOEs can also be used with over 100 watt USP lasers. In addition to diffraction-based DOEs, refractive optical elements (ROE) are also commonly used for beamforming because they can refract beams at a power in the multi-100 watt range.

New applications for DOEs in the automotive industry

With their high thermal stability, DOEs and ROEs bring significant benefits as they increase the productivity of USP laser systems. For example, scientists at Fraunhofer ILT have developed DOEs that form a whole array of up to 196 similar beams from one powerful USP laser beam.

However, even when individual beams are used for processing, these optical elements open up many new exciting possibilities. Specially shaped USP laser beams can structure surfaces, introduce stress into glass volumes or change the refractive index locally.

Scientists at Fraunhofer ILT, together with the Chair for Laser Technology LLT at RWTH Aachen University and partners from industry, are exploring the extent to which beams of USP lasers can be shaped. Within the framework of the Digital Photonic Production DPP research campus – a funding initiative of the German Federal Ministry of Education and Research (BMBF) – TRUMPF and 4JET Technologies, among others, are participating in these R&D activities.

Specifically, the partners are working on processing glass for head-up displays for the automotive industry, for example. To do this, the experts in the “Femto DPP” project are producing micrometer-sized defects in the glass.

These reflect LED light at a certain angle, just as it is needed for head-up displays. The laser used in the machining can also be used to generate predetermined breaking points, which are introduced in a controlled manner for subsequent rapid glass cutting. In the future, the processing should also work on any curved glass panels.

When using USP laser pulses, the team at Fraunhofer ILT has mastered the entire process chain from beamforming simulation to plant and process development. Details of this development as well as many new applications will be presented at the “5th UKP-Workshop: Ultrafast Laser Technology” on April 10 and 11, 2019 in Aachen.

FENSTERBAU FRONTALE for craftspeople
Craftsmanship meets technology: Today in exactly 4 weeks, wood and window specialists from all over the world will gather in Nuremberg for the combined Fensterbau Frontale 2020 and Holz-Handwerk 2020.
Hall layout: Updates in some sections at BAU 2021
The new halls C5 and C6 prompted a major re-shuffle of the sections at BAU in 2019, so adaptations for BAU 2021 are only moderate in scale.
Thinking outside the box enables complex curved façade on Hamburg’s concert hall
Located on the Elbe River, on the western tip of the HafenCity in Hamburg, Germany, the Elbphilharmonie is one of the largest and most acoustically advanced concert halls in the world and an outstanding example of modern architecture.
Forel at Fensterbau Frontale 2020
On display during the exhibition there will be Forel's Vertical arrissing machine (ART. EG) and Profile Bender (ART. PB).
A+W Cantor at Fensterbau Frontale 2020: Processes will be faster, more secure, cheaper
The clever scanning app A+W Smart Companion will now also be presented at FENSTERBAU FRONTALE 2020 for the building components industry.
New Glass Expo Brand in the Middle East by 2020
AGEX and Middle East Glass Magazine launch a new Glass Middle East Expo, set to take place on February 27-29 2020 in Egypt.