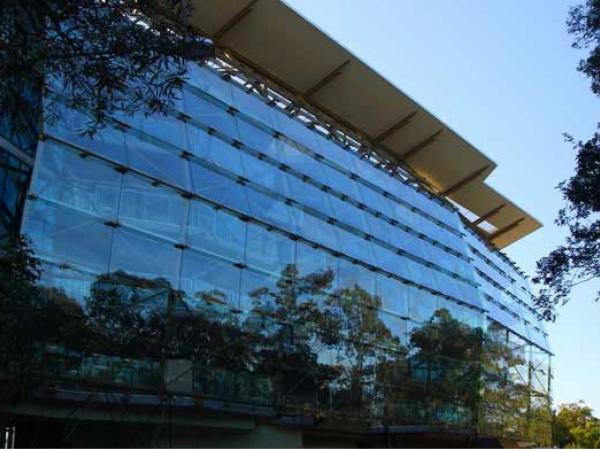 SentryGlas® ionoplast interlayer have played a key role in the façade construction on the new Sir Samuel Griffith Centre at the Nathan Campus of Griffith University; a building that is destined to become a model for ‘off-grid’ remote communities that have no access to power.

SentryGlas® ionoplast interlayer have played a key role in the façade construction of a building that is destined to become a model for ‘off-grid’ remote communities that have no access to power. The building will also provide an example of how safe, sustainable power supplies can be deployed in urban settings.

Designed by Cox Rayner Architects and constructed by Watpac Constructions Pty Ltd, the new Sir Samuel Griffith Centre at the Nathan Campus of Griffith University, is situated in tranquil, native bushland on the edge of Toohey Forest in Brisbane, Australia.

The building’s south-facing side features a bowed glass façade set out from the building as a 'rain-shield' that allows circulation edges to be naturally ventilated. This façade is supported by a steel web that utilises principles of ‘tensegrity’ developed for the Kurilpa Bridge in Brisbane.

SentryGlas® was specified in this project by G.James Glass and Aluminium Pty Ltd Australia – a leading Australian façade designer, manufacturer and installer – for multiple reasons, including its impressive strength-to-weight ratio, its excellent post-breakage performance at high ambient temperatures and its superior edge performance.

For decades, interlayers made of polyvinyl butyral (PVB) have been the industry standard when producing laminated safety glass. Architects are well aware of the possibilities and limitations of such glass when used extensively in façade engineering, for roofing and window panels. In contrast, SentryGlas® enables an entirely new approach because the interlayer is over 100 times stiffer and five times stronger than PVB.

As a consequence, there is an almost perfect transmission of load between two laminated sheets of glass, even at high temperatures, leading to the excellent flexural behavior of the glass when under load – also under direct sunlight in high summer. Accordingly, laminates with SentryGlas® show less than half the rate of deflection when compared to laminates with PVB, when under the same load, and thus almost the same behavior as monolithic glass of the same thickness.

According to Jim Stringfellow, a façade engineer with G.James: “At the time of award of the façade contract to G.James, the glass used in the feature screen had been documented as toughened laminated glass. The geometry of the facetted barrel shapes of this feature screen introduced some glass lites, which are considered overhead (ie. are installed at greater than 15° off vertical).

Although it is acceptable to the Australian National Construction Code and its referenced Australian Standards, for safety reasons, G.James have, for decades, held a more stringent internal policy of not using monolithic toughened or laminated toughened glass – particularly two-side supported and especially clamped – in overhead situations, in order to mitigate the risk of broken glass evacuating its opening and possibly falling onto pedestrians. As a result of this, we proposed heat-strengthened laminated glass.

“However, due to its reduced strength versus laminated toughened glass,” Jim Stringfellow continues, “heat-strengthened laminated glass would have needed to be thicker to overcome the critical local stresses imparted upon the glass at its clamp fixings due to wind loading. As the steelwork was already at an advanced stage of design and procurement, minimising increases in the weight of the glass were a priority.

We therefore performed a layered Finite Element Analysis of the laminated glass with the visco-elastic properties of several different interlayers, including PVB variants and ionomers, in the glass make-ups. We subsequently determined that the use of a SentryGlas® ionoplast interlayer offered the thinnest and subsequently the lightest design for this feature screen using heat strengthened laminated glass.”

G.James also commissioned wind engineers, Windtech, to conduct a wind tunnel analysis of this building to reduce the wind pressures to complement the strength benefits of SentryGlas® to minimise the weight of the glass for the feature screen.

The new building has an incredible array of green credentials. Covered by 1,124 solar panels, it can generate its own power which is supplied to the building via two inverters.

Any surplus energy is stored in batteries in the basement level for use during the night and periods of little or no sunshine, providing a stable power supply over any 24-hour period, with grid-supplied power only being exploited during unusually long periods of rain or cloud cover. The building also deploys fuel cells utilising hydrogen-metal hydride storage technologies, which will kick in when the first batteries run down to a certain level. It is believed that the Centre is the first building to run a hydrogen storage process on this scale.

The use of a SentryGlas® ionoplast interlayer offered the thinnest and subsequently the lightest design for this feature screen using heat strengthened laminated glass.

At night, stored energy is also used to chill water for the main air-conditioning system to run the next day. The air conditioning includes general ducted air conditioning, supplemented by ducted 'task' air, which delivers conditioned air to allow individuals an element of personal control.

Water is also collected from the roof and stored in a large water tank for use in landscape irrigation and toilet flushing. Finally, approximately 30 per cent of the building is constructed from recycled materials and includes glass, aluminium, concrete, steel, bricks and fibro-cement sheeting.

With this impressive list of sustainable features, it will come as no surprise that the Australian Green Building Council has awarded the building a six Star Green Star rating – a comprehensive, national, voluntary rating system that evaluates the environmental design and construction of buildings.

SentryGlas® is rapidly becoming the interlayer technology of choice for high-profile sustainable building design. Façade and glazing engineers around the world are turning to SentryGlas® because of the benefits it offers in terms of structural integrity, safety, security, durability and design versatility.

Over 100 times stiffer and five times stronger than standard PVB, SentryGlas® offers an almost perfect transmission of load between two laminated sheets of glass, even at high temperatures, leading to the excellent flexural behaviour of the glass when under load – also under direct sunlight in high summer. Accordingly, laminates with SentryGlas® show less than half the rate of deflection when compared to laminates with PVB, when under the same load and thus almost the same behaviour as monolithic glass of the same thickness.

As well as improved strength and stiffness, other benefits of SentryGlas® include:

Devil's Detail: Bent Glass
From domed skylights to curved handrails, revolving door enclosures to building enclosures, the dramatic curves of bent glass offer architectural form and function.
Bend, don’t break: new tool enables economic glass design
Computer scientists develop a design tool that opens up the use of a cost-efficient technology for curved glass panels. The tool is based on a deep neural network and allows for the free-form design of beautiful glass façades.
glasstec Specialist Article No. 4: Glass in Modern Architecture
Held in Düsseldorf from 15 to 18 June 2021 glasstec will pick up on the latest glass trends related to shapes, formats and structures.
#AskGlaston Episode 58: Why is SentryGlass more difficult to laminate than normal PVB?
That’s an excellent question! It really is true that SentryGlass is more difficult to laminate in many aspects than standard PVB. But if we first think of what SentryGlass has been designed for, it is to give structural strength to the laminate.
How Structural Interlayers Work
Traditional uses of glass have been reinvented by two architectural firms, who artfully use glass and interlayers to achieve very different design goals.
Saflex Acoustic Cuts Noise Down to Size
Noise as one of the major pollutants in our environment and society

Tecglass digital printing: technology at the service of design