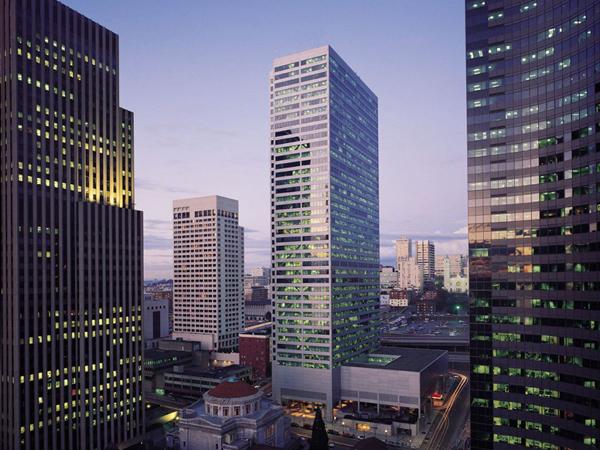 The contractor GLY Construction of Bellevue, hired Washington Glass and Glazing of Lynnwood to install the glazing scope who in turn selected W&W Glass to supply the structural glass entrance system for the project.

The building formerly known as Seafirst Bank, which is now still partially occupied by Bank of America (the company that took over Seafirst), has completed a total transformation after taking on a $46 million dollar renovation which included dividing up the space further to accommodate more tenants, upgrading the lower 5 floors of the facade, and repositioning the lobby area.

Completed in 1981, 800 Fifth Avenue forms a glimmering silhouette with its silver aluminum anodized skin and large windows. It is a 42-story, Class A office tower located at 800 Fifth Avenue, bordered by Fifth and Sixth Avenues and Columbia and Marion Streets in Seattle, Washington.

The building has a total gross area of over 1 million square feet, of which approximately 934,800 square feet is rentable office and commercial space.

The complex also contains a landscaped public plaza, 17,000 square feet of retail space, and includes parking for 612 cars below street level. It’s still one of the tallest buildings in Seattle.

Three years ago there was a fast-moving trend in Seattle to renovate iconic older buildings due to the high volume of unoccupied office space in the city and across many parts the nation.

Even though the building has been able to retain a minimum of between 90-98% occupancy since it was opened, the owner Hines Investments joined the wave to improve older buildings in various ways to compete with customers looking at newer, more modern towers downtown. This is where the renovation story of 800 5th avenue begins.

The renovation designed by LMN Architects of Seattle, called for the removal of the 24-foot tall curtain wall entrance area to allow for the new all glass feature wall. They also expanded the lobby by more than a third.

In addition, the design called for remodeling of all of the bathrooms throughout the tower and upgraded the elevator cars. 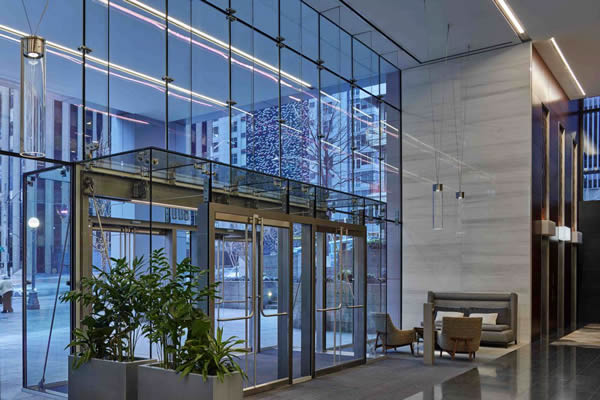 The contractor GLY Construction of Bellevue, hired Washington Glass and Glazing of Lynnwood to install the glazing scope who in turn selected W&W Glass to supply the structural glass entrance system for the project.

W&W Glass has long-standing reputation of understanding the nuances of complex renovations and delivering high-quality system solutions on time and within budgets.

This project was no different as W&W supplied and engineered the Pilkington Planar™ point-supported glass facade with a custom all glass vestibule door portal area integrated inside.

The all glass facade was constructed with suspended low-iron tempered glass fins to support the face glass of the wall. An important consideration for suspending this wall in the Seattle area was the inelastic seismic drift movements.

Pilkington Planar™ structural glass systems are designed to move (under specified code seismic events) without breaking glass in most cases.

The metal door portal on the interior of the glass vestibule was required to brace the bottom of the glass fins and provide separation for the base loaded glass doors and the suspended facade.

While the exterior glass of the vestibule was insulated for thermal performance, the interior vestibule glass was monolithic.

Laminated glass beams span across the interior and exterior of the portal to help support the side walls and laminated roof glass.

Many would agree that the new wall and entry area helps make the lobby more visible from the street and much more comfortable for tenants and visitors inside with a better connection to the surrounding environment.

It’s a remarkable transformation, especially in the expanded lobby, which has gone from a dreary pass-through space to a light-filled gathering place.

Part of the second-floor exterior plaza was enclosed to create a mezzanine, with more seating and open conference areas.

In addition, an old data center on two floors near the base of the building has gone from a mostly windowless space to 80,000 square feet of window-lined office space.

On the fourth and fifth floors, new glazing has also transformed this area into Class A offices, with high ceilings and natural light. New signage was added to improve visibility and wayfinding. Finishes include marble and stone, stainless steel curtain-wall, and accent pieces throughout.

Though Bank of America remains the tower’s largest tenant, it now has a new neighbor: Providence Health & Services has signed a 10-year lease for about 140,000 square feet and has recently moved it’s administrative staff in from a Renton office. Swedish Health Services, which is affiliated with Providence, will also move staff there out of One Union Square.