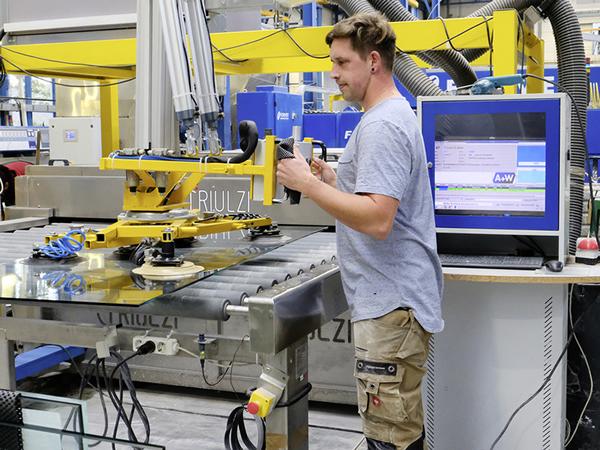 2016 was the year of Industry 4.0 at glasstec. The term "glass industry 4.0" was born. And highly digitalized systems and robots controlled by intelligent software were everywhere.

Yes, Industry 4.0 is having a birthday – and a big one at that! The term was used for the first time at the Hannover Messe in 2011 as the name for a project of the German Federal Government. The main goal is the digitalization of all industrial processes based on intelligent, continuous networking.

So Industry 4.0 doesn't come from Silicon Valley – who knew? It's fair to say, however that American scientists and engineers had begun working on the "Internet of Things" ten years before that – and that's where Industry 4.0 actually came from.

2016 was the year of Industry 4.0 at glasstec. The term "glass industry 4.0" was born. And highly digitalized systems and robots controlled by intelligent software were everywhere.

2016? From this, you might conclude that the flat glass industry was a little late to the party:

This example shows that Industry 4.0 is not something that suddenly appeared on the horizon in 2011. Instead, this development has happened over decades; however, due to increasing digitalization and automation and with changing markets as the catalyst, it has accelerated rapidly.

Meanwhile, manufacturing like that at Comayco can now be found at many insulated glass companies – even if the fully-automatic robotic packaging at the end of the insulated glass line is being adopted only slowly.

Now, we are seeing dynamic Industry 4.0 environments more frequently in processing as well. State-of-the-art CNC processing lines are controlled so cleverly by intelligent bidirectional interfaces across all chained processings that the delivery times are getting much shorter even as quality is increasing. The software company A+W makes such interfaces available for all modern systems, thus implementing even more Industry 4.0 requirements.

A barcode scan is enough to transmit all processing parameters to the next machine – there are no more wait times. For companies with clever business ideas, this inspires new and exciting business ideas: The glass finisher Spiegel Thomas, for example, delivers any lite ordered within 24 hours in Bavaria, Baden Wuttemberg and Hesse; TG lites within 48 hours. "Dynamic production and top quality," explains Managing Director Maximilian Rössler, "are only possible with the highest degree of automation."

Constant barcode scans are also the critical element for recording process data and lite tracing. Only with well-organized PDC with barcode registration and clear production screens can lites be traced continuously in production, identified with certainty, their sequence changed, responses to customer inquiries about production status provided reliably, etc. Thomas Knott, IT Manager at the insulated glass manufacturer Schöninger: "The A+W barcode tracking has taken all of our production organization to a new performance level. Only with it are we in a position to truly organize ourselves efficiently without long information paths, complicated inquiries, and time-consuming re-makes."

With barcode scanning, more and more companies are taking leave of traditional industrial scanners and instead using high-quality smartphones and other smart devices for scanning. The A+W Smart Companion app for production, stock, and inventory makes this possible. A+W Smart Companion supports the whole value chain – from goods receipt to dispatch – and at the same time, it serves as an info terminal ("where is lite no. 03532?"). Long walks and tiresome searching are avoided.

10 years of Industry 4.0 – where will we go from here? A+W CEO Peter Dixen says, "Classic automation can be applied to individual machines and process steps without affecting subsequent processes and other areas in the office and in production. In Industry 4.0, by contrast, the foremost concern is intelligent communication in complex systems. All commercial and production-related processes are networked with one another – 'from quote to cash.' Machines communicate with one another, with people, with workpieces, with software systems based on a uniform data platform. With increasing digitalization, ordering, production, and delivery processes based on a uniform data platform will organize themselves ever more independently and optimize themselves constantly with each process step. “

‘This article has been first published in German language in GLASWELT magazine’ 02/2021
www.glaswelt.com 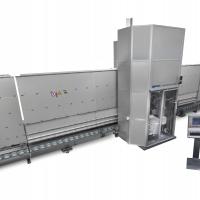 IoT and glass processing – where are we heading?