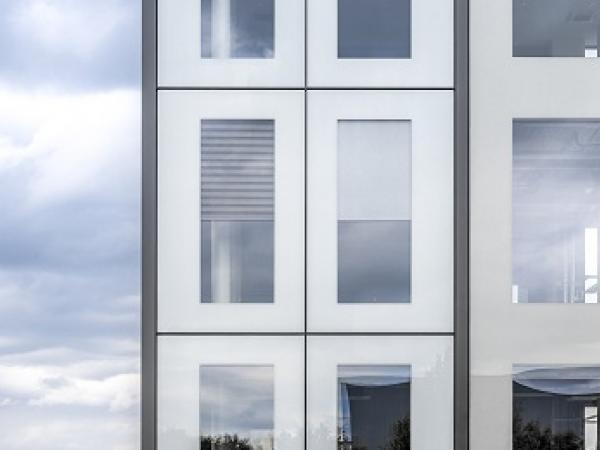 Over half the world’s seven billion inhabitants live in cities, by the year 2050 the number will grow to almost ten billion. In order to avoid a climatic collapse in the metropolises, there is no other alternative to energy-efficient buildings.

Glass façades, which produce eco-electricity, provide heat insulation and sun protection and also automatically adapt to the light conditions, help when it comes to climate protection.

Wilhelmsburg used to be a no-no for visitors to Hamburg. The neighbourhood is regarded as dull and short of attractions. But its image is changing: it has now become the location of the “greenest house” in the Hanseatic City. With its so-called bio-reactor façade, the five-storey BIQ – the abbreviation stands for “House with Bio Intelligent Quotient” – is a trailblazer for sustainable buildings and construction.

Algae grow in between the glass panels on the façade and produce bio mass and heat from the combination of light and carbon dioxide. The heat is directly fed to the 15 apartments for heating purposes via heat exchangers, while the bio mass is skimmed off. It is used to produce bio gas, which a fuel cell converts into electricity and heat.

A control system distributes the energy and simultaneously regulates the growth of the algae, by always feeding it with the exact amount of carbon dioxide (CO2) from the fuel cell it requires for the photosynthesis process. Each year the organisms produce 4,500 kilowatt hours of electricity – that is sufficient for two households. In the demonstration project the remaining electricity requirements are met by the public grid. In contrast, surplus heat is produced by the façade on bright days. It is fed into the local heating network or stored in geothermal probes. In winter, when the bio reactor produces less heat energy, the BIQ draws the required energy from these storage facilities.

The algae house could assume a pioneering role for future construction projects. Cities are absolute CO2 producers: in global terms they consume 75% of the primary energy used and cause 80% of greenhouse gas emissions, a rising tendency coupled with the growing world population. According to Klaus Sedlbauer, Head of the Fraunhofer Institute for Building Physics (Institut für Bauphysik - IBP), we must therefore find a way of quickly countering this trend.

“We use around 40 percent of the primary energy resources for heating and cooling our buildings. There is gigantic savings potential here. The aim is to address this in central Europe”. In addition, fossil fuels used in buildings must be replaced by renewable energy carriers and green energy also stored, says Sedlbauer.

Urban planners and architects must now act quickly: smart houses are required, which produce electricity and heat themselves, and at the same time offer a comfortable and secure living environment. Together with 11 other Fraunhofer institutes, the IBP is currently conducting important groundwork on the “Morgenstadt” (City of Tomorrow) project.

Based on six cities – Singapore, Copenhagen, New York, Berlin, Freiburg and Tokyo – the researchers are developing concepts aimed at achieving the successful energy turnaround in metropolises with different features and conditions. One thing is now already clear to the scientists: smart electricity and heating networks, which link energy production and consumption through many different energy carriers, will be the elementary prerequisite everywhere.

More than just a pane of glass: in the “iconic skin” façade element a ventilation solution between the glass surfaces enables the compensation of pressure and humidity. Photo: René Müller Photos/seele

Buildings with smart technology and building automation are to become key pillars in these “Smart Grids”. Solar technology for example would be easier to integrate in houses than algae. Solar modules can be screwed onto rooftops as well as electricity-generating windows or integrated into the building shell.

Additional battery storage units help to consume as much solar energy as possible directly in the building. The problem with direct utilisation is that solar energy fluctuates greatly and is often not available when needed. Batteries absorb the surplus energy and supply the solar power when required.

Solar-thermal facilities in turn provide the energy for hot water heating and heating collectors on the roof convert the sun's rays into heat. A heat exchanger is used for heating water in a storage unit and can then be used in the kitchen, bathroom and to save heating energy. The collectors can also be combined with so-called sorption air-conditioning systems, which convert heat into cold, thus also enabling surplus heat to be used purposefully in summer, too.

If, in addition, existing buildings are redeveloped energetically, the CO2 emissions will be reduced further. In its study “Intelligente Energieversorgung für Berlin 2037” (“Smart Energy Supply for Berlin 2037”), researchers at the Berlin University of Applied Science (Technische Universität Berlin) have for example established that the capital’s entire energy requirements can be reduced by 45 to 50% solely through the use of energy savings measures such as new heating systems and windows.

The fact that the City of Tomorrow (Morgenstadt) will become reality and that high-performance modules, collectors and energy-saving windows can be used universally, across all applications, is however subject to one key condition: innovations in glass. Modern Glass façades protect against summer heat and remove the need for electricity-guzzling air-conditioning systems.

Window panes enhanced with so-called electro-chrome nano-particles change their translucency when subject to tension or other trigger factors such as the sun's rays or heating and thus serve as sun or glare protection elements. On the other hand, window façades are insulated so well that in winter no heat can escape outside – but, on the other hand, the winter sun’s energy can penetrate the rooms inside.

In addition, glass protects the sensitive absorber coatings of the solar modules and collectors against external weather conditions, and thanks to special coatings and textures, contributes to more light being used for electricity and heat production. New flat glass, which is only a few millimetres thick, could provide the photovoltaics sector with an additional boost: It enables the production of particularly stable double-glazing modules or glass sandwiches with embedded photovoltaic films.

From 20 to 24 October 2014, glasstec 2014 in Düsseldorf, the world's largest and most international trade fair for the glass sector, will reflect the growing significance of glass as a material for climate protection objectives. Within the framework of the “Intelligent Building Shells” key theme, a comprehensive look will be taken at the aspects which are decisive for future-orientated, energetically efficient and sustainable building shells.

Using examples of large-format, façade mock-ups and one-to-one models, the “glass technology live” special show, which is organised by the University of Stuttgart, will present the latest developments in the area of façade and energy.

Flexible solar cell: Which photovoltaics technology can be most effectively integrated in the building shell? At the laboratories the search is in full swing. Photo: Tom Baerwald, Berlin/Heliatek

Among other features, there will be demonstrations at the special show illustrating how modern heat insulation, sun protection glazing and switchable glazing can be integrated into buildings. One example is provided by the modular-structured “iconic skin” glass façade created by German company seele.

The façade element appears to be completely homogenous, without any visible posts or pillars, lateral supports or other securing elements. The unit consists of internal and external glass. Between the glass sheets there is a self-regulating pressure-compensation system, which ensures passive ventilation through its interaction with the external climate.

According to seele, the glass sandwich offers excellent thermal and sound insulation and enables the integration of solar protection elements. Maximum element sizes of 3.20 by 15 metres extend over several storeys to form one vertical, optical unit. The units can be individually designed: customers can freely choose the arrangement, form and size of the transparent areas as well as the printing and colour scheme of the external and internal glass surfaces.

The Josef Gartner company, a subsidiary of the Italian Permasteelisa Group, has developed a different type of functionally stand-alone façade. The special feature of the CCF façade (Closed Cavity Façade) is that the space between the inner and outer façade shell is completely encapsulated. The enclosed chamber is fed with dried and cleaned air at slight over-pressure so as to prevent the formation of any condensation and dirt on the window panes – ensuring they do not have to be regularly cleaned in a costly, complex process.

In the opinion of the experts, future solutions for the building shell will include an even greater integration of photovoltaics. Analysts from US market research company Nanomarkets estimate that up to 2019 the value of the Building-Integrated Photovoltaic (BIPV) glass market will more than triple from 823 million to US$ 2.7 billion. In their current BIPV report they assess BIPV glass as a key technology for zero-energy houses, which due to new building guidelines in the USA and Europe, will become the standard in future.

The photovoltaics industry is already preparing itself for the technological challenges. Companies such as Heliatek or Belectric OPV can now create completely transparent solar films which can function as invisible power plants. In addition to the manufacturers of organic photovoltaics, an increasing number of thin-layer module producers are also developing photovoltaic films.

For example Miasolé from California, subsidiary of the Chinese Hanergy group, is using photoactive copper films to now reach an efficiency level of over 14 percent – almost as much as what is possible with conventional silicon modules.

With the trend towards solar film, new production methods are also becoming the focus of attention. Silicon cells are sawn out of silicon blocks in a costly process, while thin-layer modules are “baked” in special ovens. Flexible cells, in contrast, can be produced continuously and quickly through roll-to-roll vapour-depositing or roll pressing.

In order to successfully move BIPV forward, the glass and photovoltaics industry must however work together more closely in future. Which solar cells are suitable, who integrates the solar films in the construction glass, what could the cost of all this be?

“There are still many open questions”, says Timo Feuerbach, speaker from the Glass Technology Forum within the German Engineering Federation (VDMA). At the glasstec “Solar meets Glass” Congress from 20 – 21 October 2014, the sectors will have the opportunity to pave the way for cooperations – and thus bring the City of Tomorrow a further step closer.

600450
www.glasstec-online.com
The City of Tomorrow: smart glass the key to the urban energy turnaround glassonweb.com