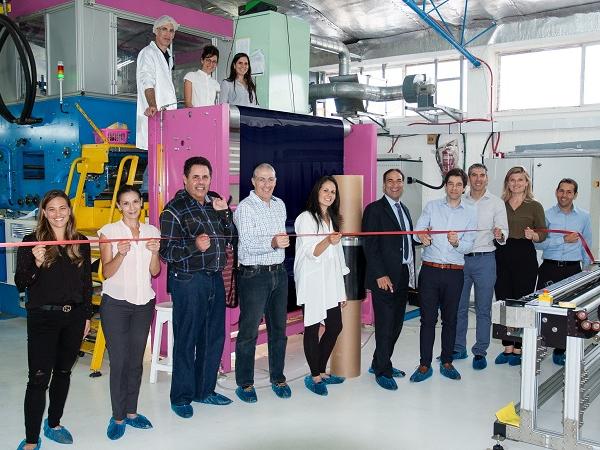 The announcement came at a ceremony to celebrate the inauguration of Gauzy’s production line to produce SPD-Smart light control film in Tel Aviv-Jaffo where, along with Gauzy’s 65 employees, Gauzy CEO Eyal Peso and Research Frontiers CEO Joseph Harary, cut the ribbon on the new factory.

Eyal Peso, Founder and CEO of Gauzy, noted: “Our mission is to bring the best-performing and most innovative technology-based products to our customers worldwide. We saw a large market opportunity to expand beyond our liquid crystal film products used for privacy and projection applications, and to enter the rapidly expanding market for films that can also control light, heat and glare. Now, as market leaders in this area with Research Frontiers, Gauzy is ready to produce its SPD-Smart light control film technology in our factory, and we have made a substantial investment, not only in establishing a world class manufacturing facility to make SPD-Smart film for the entire smart glass industry, but also by hiring additional people and making a direct investment in Research Frontiers itself last month.”

Joseph M. Harary, President of Research Frontiers noted: “Gauzy has impressed us and our licensees from day one. They have a focused determination to quickly bring to market products that their customers value highly. They do this through innovation and investment in state-of-the art production processes, and the hiring of top engineers and scientists. Research Frontiers has been emphasizing the desirability for a wider and less expensive SPD-Smart light-control film than is currently being produced for the SPD-SmartGlass industry, especially for key emerging markets such as the architectural smart glass market. Our agreement with Gauzy has established aggressive cost reduction targets, and established short-term milestones for wider film, and if they meet these and other milestones, Gauzy will become an important supplier of SPD light-control film, a key component for the entire smart glass industry.”

Gauzy’s film production line has a capacity to produce up to 364 thousand square meters of film per year per shift. While current SPD-Smart film is being produced for the smart glass industry in rolls that are one meter wide, Gauzy’s initial production of SPD-Smart film later this year will be 1.2 meters wide, and next year they will be producing SPD film that is 1.5 meters wide. Gauzy will thereafter be able to produce SPD-Smart film that is the same 1.8 meter width that Gauzy currently produces for its PDLC film. By meeting these and other milestones, Gauzy has the ability to be one of only two manufacturers in full production of SPD-Smart film that is licensed by Research Frontiers to supply the entire SPD-SmartGlass industry for all markets, including automotive, aircraft, marine, museum and architectural.

Research Frontiers patented SPD-SmartGlass technology is the same best-selling smart window technology that can be found on various car models from Daimler. The MAGIC SKY CONTROL feature, which is now in use on tens of thousands of Mercedes-Benz SLs, SLC/SLKs, Maybach and S-Class models around the world, uses patented SPD-SmartGlass technology developed by Research Frontiers to turn the roof transparent by electrically aligning tiny particles in a thin film within the glass.

Along with a best of breed R&D team, Gauzy also has an on-site production line with custom machinery for high quality products with on time delivery. Gauzy’s technology is featured in notable projects worldwide, including automotive collaborations with leading OEMs and Tier 1 suppliers, hotels, corporate offices, luxury residences, retail chains and consumer electronics.

Diamon-Fusion® Protective Coating Glass Benefits
Protect your glass with Diamon-Fusion® coating which is eco-friendly, UV-resistant, and comes with a residential lifetime warranty ensuring the surfaces are protected for years to come.
Early Bird Registration is Still Open for the Facade Tectonics 2022 World Congress!
Register today with our Early Bird pricing to claim your spot amongst the industry’s most influential leaders and academics.
NGA Promotes Weather Safety Awareness
Get NGA downloadable resourses to support the use of glass and glazing materials in buildings.
Turnkey solution for your automotive prooduction | Tecglass
On January 31st, 2022 Fenzi Group has completed the acquisition from Johnson Matthey of the Advanced Glass Technologies (“AGT”) business, which combined with the TECGLASS technology, will further innovate the automotive glass market solutions.
SOLARBAN® 67 SOLEXIA® Glass at the University of California Project
SOLARBAN® 67 SOLEXIA® Glass Maximizes Daylight for a Southern California Higher Education Mixed Use Facility
Final Schedule, Speakers Announced for 2022 FGIA Virtual Summer Conference
The final schedule has been released for the 2022 Fenestration and Glazing Industry Alliance (FGIA) Virtual Summer Conference, to be held June 6-9.