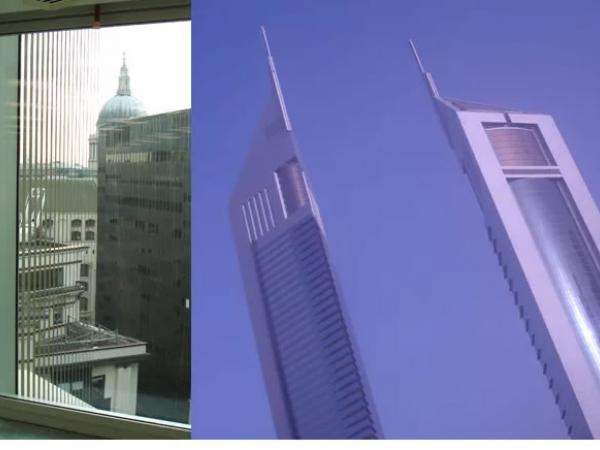 Wrightstyle is a specialist steel and aluminium glazing company and supplies its fire-rated systems internationally.

Architects are either creative people, or people who simply think they’re creative. Either way, their ideas shape our towns and cities, creating cityscapes that are inspiring, wacky – or, in some very few cases, iconic.

Modern architecture is shaped by designers interpreting the past to build reflections of corporate or civic modernity. In bad hands, their interpretations of past and future create buildings without design continuum or contemporary relevance.

But within that philosophy of architecture as a mirror to the future is a new dynamic because, within the global vortex of creativity, there does seem to be one not-so-subtle difference of approach between east and west.

Maybe, and it’s only a maybe, it could be about how we see modernity and what we believe the future should look like. A reflection, perhaps, of both individual and collective psychology.

Shakespeare or Wren, looking down at modern London, would still recognise the medieval street layouts, sometimes with their original buildings. The structures that have grown up around them mainly stand within that continuum. For some reason, by and large, we value the best of the past.

In the east, it’s been a different story. When modern prosperity came to Asia, it came with mind-blowing intensity and an overwhelming urge to rip up the old and rebuild from scratch. Across the Middle East and Asia, old towns and cities were simply bulldozed. Think of Dubai.

In the rush to rebuild, against a background of enormous economic growth, there is only one kind of building that can arrogantly shout out status – a shorthand and visible symbol of everything that the modern world can offer. The supertall skyscraper.

A whole raft of supertall buildings are due for completion this year, including a 599-metre tower in Shenzhen that will take the mantle of the world’s tallest office building from the One World Trade Centre in New York; the 597-metre Goldin Finance 117 tower in Tianjin; and the 555-metre Lotte World Tower in Seoul, the tallest tower on the Korean peninsula.

The supertall list also includes the CTF Finance Center in Guangzhou; the Wuhan Tower, Wuhan; the Marina 101 tower in Dubai, set to be the UAE’s second highest building after the Burj Khalifa; the Eton Place and International Trade Centre projects in Dalian, China; and, lastly, the Vostok Tower in Moscow.

Apart from that one lowly entrant on the list in Russia, all the rest are in the Middle East or Asia, with most of them in China.

It’s a philosophy of building ever-upwards that can only partly be explained by burgeoning urban populations or the availability of suitable land. Jeddah, for example, sitting on the edge of a desert, hardly has much need to build a kilometre into the sky.

The rise and rise of the city state does, of course, play a not inconsiderable role, with major conurbations now dominating commercial and cultural life as never before. Apart from population and land pressures, competition between cities and countries has made some build taller and taller as an exercise in civic vanity and economic marketing.

It’s a game that architects in the west also played, particularly in America. The macho skyscraper came to stand for a brand of modernity that symbolised a collective power to harness technology and imagination and build the unthinkable. Ask anyone to visualise symbols of American power, and the New York skyline will be one that springs to mind.

But now, with economic power moving east, and driven by growing environmental concern, western architecture seems to be grasping at softer, less masculine, forms of design that better reflect our innate connections to the world around us, instead leaving eastern countries to grasp at yesterday’s phallic symbol.

In the west, we are reaching towards a more “instinctive” form of architecture that uses greater amounts of natural building materials to create a different kind of tomorrow’s world; a new fusion of form and function that has no need to build supertall as symbols of power, wealth or progress.

Of course, in cities such as London, the skyscraper is still being built – but without any lofty ambitions to be the biggest or the tallest. But, just perhaps, that lack of ambition suggests a nascent east-west divide as to how tomorrow’s megacities should look.