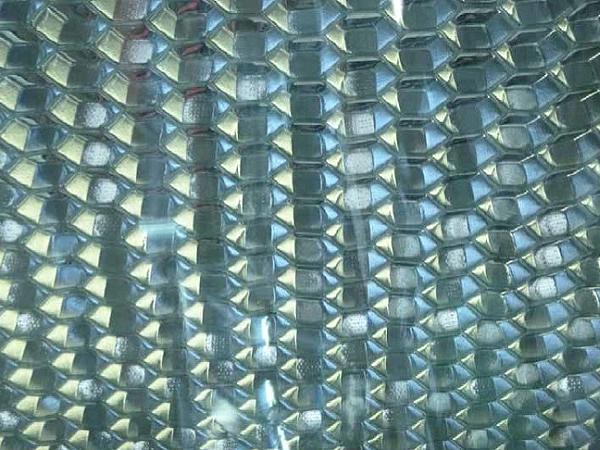 To provide stiffness, shading and privacy with abundant daylight and a feeling of openness for restaurant extensions and an entrance canopy to a London hotel, we used glass sandwich panels with aluminium honeycomb core.

Similar construction had been used on smaller scale for interior decorative panels and for some interior floor panels but without engineering development. Exterior glass sandwich panels need durable strength and stiffness with continuing clarity, so we developed a detailed set of tests and acceptance criteria for all aspects of the appearance and performance of the panels with a specialist façade contractor.

The panels were over twice the area of previous examples and too large for the established sandwich panel manufacturers so the contractor developed a new production method.

When sealed sandwich panels are exposed to the weather, they experience changes of pressure in the entrained air, so need to be allowed to equalise. We proposed to ventilate the panels through canisters of silica gel desiccant to dry incoming air sufficiently to avoid condensation.

The technique is commonly used to condition the expansion airspace above insulating oil in electrical transformers but was not known in the glazing industry. The technique has wide potential for façade applications.

Project Partner, Amo Kalsi described the challenge to give guests the feeling of sitting in a bright, open space while being protected from the heat of the sun or the prying lens of the paparazzi.

A reflective coating on the glass would prevent a view in during the day but would make the volumes look hard, heavy and monolithic from outside rather than light and transparent.

At night, a reflective coating would not prevent a view in but would reduce the view out, making the spaces feel closed. Patterns of ceramic frit could blur the view in either direction but provide little shading and detract from the intended clarity and sparkle.

Browsing our collection, comparing combinations of glass types and other materials, a number of shading and privacy devices, such as reflective louvers and plastic tube bundles, enclosed within double glazed units, seemed to offer some of what was required but none had the desired combination of clarity, privacy, sparkle and charm required.

It was a combination that was as difficult to express as to achieve but when Amo referred to the marque “Bugatti” it became clear that we needed a combination of technology and craft serving performance objectives, from which the aesthetic would emerge.

We found a small sample of clear plastic sandwich panel with an aluminium honeycomb core and had seen honeycomb panels with glass skins used as interior dividers and glass floors, in projects like the Light House in North London by Gianni Botsford Architects.

Playing with a variety of honeycomb sizes and seeing them sandwiched between glass, we noted the inevitable small variations in the geometry of the hexagonal cells that results from the process of stretching out the block from a stack of bonded foils. Far from being an undesirable ‘defect’ the variations lent interest and richness to the texture.

Although the aluminium foil is only 50 to 70 microns thick, and therefore less than 0.8% of the cross sectional area, the thermal conductivity would be too high to form the insulating envelope of the building on its own.

We did experiment with a Nomex paper honeycomb sample, which is a much better insulator, but the characteristic colour was not suitable in this case. Thermal insulation was provided by adding a conventional insulating cavity with laminated heat strengthened glass on the interior face of the structural honeycomb panels.

The lower pane of the sandwich panel carried a durable solar reflective coating and the lower face of the insulating cavity had a low emissivity coating to minimise long-wave radiant heat gain from the honeycomb when exposed to direct sun, as well as to minimise heat loss.

The effective shading coefficient or total solar heat gain was complex to estimate because of the geometry of the aluminium honeycomb and was simulated in a variety of ways to converge on an estimate. The properties are expected to be dependent on the angle of insolation but more research is required to characterise such composites fully.

An advantage of using honeycomb bonded to the glass skins is that the resulting panel has much higher stiffness and strength than a simple laminated pane. This enabled the 4.5m high walls to be spanned vertically without mullions and the 1.9m wide roof panels to remain flat enough to allow a very shallow fall.

Development of the criteria

Prior uses of glass honeycomb panels appeared all to be interior applications, where exposure to UV light and thermal changes were not so severe. In addition, the require sizes up to nearly 4.8m by 2.4m were too big for existing panel making facilities, so the appointed specialist contractor Bellapart elected to manufacture their own panels, which required selection of the clear adhesive and development of a production method for such large panels.

The newly made panels would not have a track record of performance in service based on previous production, so it was essential to carry out a programme of testing to verify the properties and durability.

We worked with specialist contractor Bellapart to identify the various potential failure modes to test for, find or devise test procedures and agree acceptance criteria before testing commenced. [1]

Bellapart developed a panel manufacturing cell complete with specially engineered mixing, de-airing and dispensing machinery to apply the adhesive to the glass panels and cure the assembly with UV light. The design was finalised in 2009 but construction was paused until 2015. [2]

When sealed sandwich panels are exposed to the weather, they experience changes of pressure in the entrained air according to the ideal gas law

The honeycomb core prevents the glass skins from deflecting, so in a sealed panel the full isochore pressure would be developed, which in this case would be up to 15kPa. [3]

The average stress applied to the edges of the aluminium honeycomb appears to be relatively low isochore pressure/cross section of aluminium = stress on aluminium edge.

However, this would be additional to stresses arising from other structural loads, and would occur repeatedly over long periods. In fact, the production method does not make an adhesive bond simply to the edge of the honeycomb foil but forms a continuous fillet joint between the glass and the walls of the honeycomb. In that joint, the stress is distributed to some extent but remains concentrated at the root junction where the aluminium foil meets the glass.

To maximise the durability of the panels and avoid the risk of premature deterioration as a result of vapour seal failure, it was decided to equalise them to external pressure. Perforated honeycomb was used to allow equalisation, a common strategy in aerospace applications. [4]

Allowing the units to equalise to atmospheric pressure introduced the challenge of keeping the cavity dry enough to avoid condensation during cold conditions.

Although the perforations in the honeycomb would allow slow equalization of pressure between cells, the rate of diffusion between parts of the cavity would be slowed significantly, so a simple capillary breather tube was not considered to be a reliable solution because transient condensation could be trapped for long periods and biological growth might occur inside the unit. [5]

Hydraulic systems, fuel systems, large gearboxes and oil-filled transformers all need to allow for flows of air to compensate volume changes and all need to avoid condensation from moist air drawn in, so a range of industrial desiccating breathers is available.

These breather units contain silica gel granules, which are better than molecular sieves at releasing moisture into outgoing warm air, and inward and outward relief valves or an oil trap to keep the desiccant separated from external air until a small pressure difference exists to be relieved.

Some systems even include moisture sensors, valves and a heater to re-generate the silica gel when it approaches saturation. In most cases, the low cost silica gel is replaced periodically. The air inside the system does not achieve the very low dew-point typical of a new hermetically sealed insulating glass unit but in most cases will be low enough to prevent transient condensation when the glass gets cold.

We applied a similar breather system to the spherically curved insulating glass units on the Las Vegas High Roller observation wheel in Nevada, USA because the glass could not be thermally tempered and the climatic loads would have been excessive for annealed glass. [6]

Other reasons to equalise climatic load would be to avoid visual distortion arising from deflection of the glass, or excessive stress on edge seals.

Various curtain wall systems, especially those with large cavities, are also being studied for application of the same technique. More research is needed to understand the details of moisture movement within façade systems, using desiccant breathers and designs will need to take note of diffusion and convection effects, including the lower density of moist air, in order to realise the full potential.

The primary advantage is that because the desiccant can be replaced or regenerated remotely from the insulating glass, the life can be greatly extended. It may also be feasible to re-configure glazing design without the permanent bonding of panes, which would have advantages for upgrading in service and the re-use or recycling of materials at end of life.

Structural glass sandwich panels with honeycomb core have been shown to be durable and to have unique architectural qualities including light transmission, shading, privacy and high stiffness to weight ratio.

To maximise the durability of honeycomb panels, the desiccant breather technique was applied, which has applications where climatic loads need to be equalised or where it is advantageous not to bond panes permanently together.

Dimensioning of silicone adhesive joints
Eurocode-compliant, mesh-independent approach using the FEM
Artificial intelligence for structural glass engineering applications
Overview, Case Studies and Future Potentials
Flexible Transparency - a Study on Adaptive Thin Glass Façade Panels
Thin glass offers the possibility for lightweight and flexible glass façades that could change shape depending on external conditions.
Structural Considerations on Timber-Glass Composites at Fire Scenarios
This paper focuses on a recently developed concept, in which glass is combined with timber to provide post-breakage strength and ductility.
Compare five dynamic shading solutions for buildings
Can you name all types of dynamic glazing that are available in today’s market? Are you aware of their particular specifications and strengths? Don’t worry even if you can’t.
A Novel, Demountable Structural Glass System Out of Dry-Assembly, Interlocking Cast Glass Components
Combining transparency with a high compressive strength, glass enables us to make diaphanous load-bearing compressive members, from beams and columns to free-standing facades and entire glass structures.

Structural glass sandwich panels with honeycomb core have been shown to be durable.

SOLARBAN® 67 SOLEXIA® Glass at the University of California Project