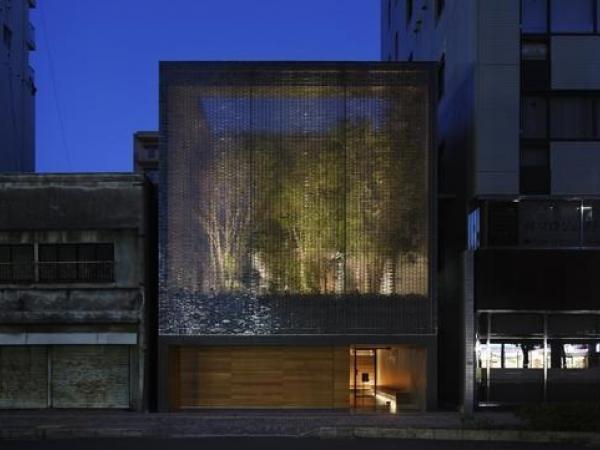 Should we wish to lift our culture to a higher level, then we are obliged, for better or worse, to transform our architecture. We shall only succeed in doing this when we remove the element of enclosure from the rooms in which we live. We can only do this, however, with glass architecture, which allows the light of the sun, moon, and stars to enter not merely through a few windows set in the wall’ Paul Scheerbart, Glasarchitektur, 1914

The aspiration to create a crystalline architecture has long inspired architects in the modern era. From Bruno Taut’s Glashaus at the 1914 German Werkbund Exhibition, to Pierre Chareau’s Maison de Verre, to Kengo Kuma’s Water/Glass House (AR March 2000), glass has had the transformative power to shape space, as it is technically both a solid and liquid with extremely high viscosity. The glass house has once again been ingeniously reinvented through the use of an optical glass facade by Hiroshi Nakamura.

In the decade since working for Kengo Kuma, Nakamura has continued his mentor’s pursuit of ‘particle-ised’ architecture through his hypersensitivity toward materials based on a ‘microscopic designing methodology’.2 His first independent commission was the Lanvin boutique in Tokyo’s high-fashion district of Ginza in which its steel-plate facade was punctured with 3,000 acrylic cylinders that animate the interior with shimmering dots of natural light.

Among the many accolades garnered by this rising star, Nakamura was highly commended in the 2011 Emerging Architecture Awards for his Roku Art Museum (AR December 2011) with its bulbous gallery spaces shaped by the volumes of existing trees. His largest project to date is the Tokyu Plaza shopping complex in Tokyo’s Omotesando district, with a dramatic tree-capped roof garden.

In designing a house in central district Hiroshima, Nakamura faced the challenge of creating privacy and tranquillity among a bustling thoroughfare filled with cars and trams. The reconstruction of Hiroshima after the Second World War resulted in wide avenues that facilitate speed for motorised transport at the expense of the fine-grained character of traditional streetscapes.

The Optical Glass House animates the street with a dynamic 8.6 x 8.6 metre glass block facade, revealing its material capacity to be both translucent and transparent depending on light conditions. Hovering above the wood-panelled ground level garage, the glass wall can transform itself from appearing as an over-sized, urban shoji screen, to a transparent layer revealing the trees behind, to a cascading waterfall-like form delicately refracting light and air.

In transitioning between exterior and interior worlds, the entry space is illuminated by light filtered from above by a water-basin skylight. Shadows from the leaves of the trees of the second level glass garden convey a sense of the living environment above. Rising up the stairs to the main living level, you encounter the first optical glass wall onto the living room. You then turn into the dining area before stepping up into the main living space that opens up into the glass garden. The tranquil enclave is tempered by maple, holly and evergreen ash trees, and the glass facade acts as a verdant kaleidoscope.

From inside the glass garden, you can begin to fathom the incredible structural gymnastics required to support the 13-ton facade made up of 6,000 glass blocks, each measuring 50mm x 235mm x 50mm. With their large mass-per-unit area, the crystalline glass blocks, effectively shut out the urban noise and create a sparkling backdrop for the garden with modulated city views.

The glass blocks are strung together by stainless-steel bolts suspended from a beam above. They are also stabilised by stainless-steel flat bars at 10mm intervals. The mass of the supporting beam below is laterally minimalised by employing a pre-tensioned steel beam encased in reinforced concrete. Despite the facade’s massive weight, it appears to be transparent from both the garden and street. Seen from inside, the glass garden brings the entire house to life.

Images of passing cars and trams appear as a silent film accompanied by the sounds of nature. The dwelling is transformed into a sensual urban oasis in which architecture has its most profound impact through its bodily experience of the fundamentals of nature − trees, water and light − within the dynamism of the city.

Detail of glass wall. The cast blocks are made from borosilicate glass more usually used in the manufacture of optical instruments. The glass retains slight irregularities that produce unexpected visual effects.

Fabricated from 6,000 long, thin blocks, the huge glass wall forms a lustrous veil, screening out the distractions of the city and enclosing a verdant courtyard garden at the heart of the house

The glass wall casts seductive shadows around the entire house