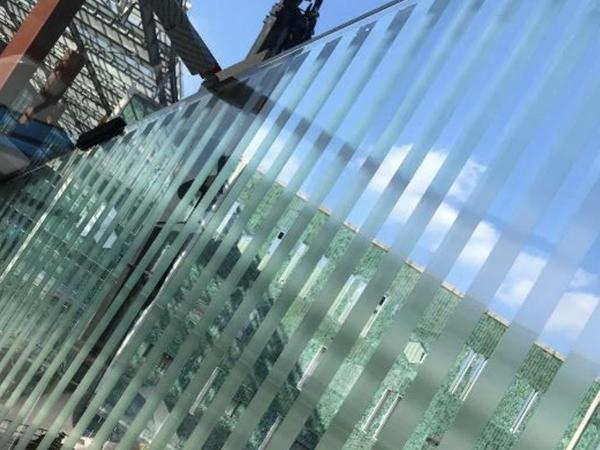 UNStudio made a beautiful design for the C&A building with a lots of glass elements to connect with the buildings around.

The C&A building in Eindhoven will be modernised and therefore UNStudio designed several glass structures for the building. One of these glass structures are four glass boxes of 5,5 meters wide and 7 meters high, which are floating in front of the existing façade. In addition, each glass box contains a work of light art designed by Arnout Meijer. LED strips illuminate the box from the inside, while the reflective film on the glass creates an unusual and striking effect. To optimize this effect no metal connections were allowed in the design. The size of 5,5 by 7 meters was exceeding every international standard format in the glass industry.

ABT designed an ‘Origami’ glass box with glass panels glued together. This geometry solved the problem of the limited size of the panels and also made a more economic structural form.The glass panels are connected seamless with different type of glues. ABT made an extensive research for the right type of glues in cooperation with the university of Leuven. The glued connections are combined with glass notches; a new type of connection, inspired by timber connections and earlier research of stacked glass columns. FEM DIANA models showed that this is a promising way to connect glass structures. Sober thinking of the engineers about mechanical schemes solved the demand of UNStudio, seamless floating glass boxes. The result can be seen at the 18 September plein in Eindhoven.

The C&A building was once designed as the most stately building at the 18 September square in the city center of Eindhoven. But the statue of the building is passed by due to urban development. Owner of the building, Redevco, asked UNStudio to make a design which would give back the old statue to the building and make it appropriate for the current time. UNStudio made a beautiful design for the C&A building with a lots of glass elements to connect with the buildings around.

The most challenging part were the four glass boxes of 5,5 meters wide and 7 meters high, which are floating in front of the existing façade. In addition, each glass box contains a work of light art designed by Arnout Meijer. LED strips illuminate the box from the inside, while the reflective film on the glass creates an unusual and striking effect. To optimize this effect no metal connections were allowed in the design.

The size of 5,5 by 7 meters was exceeding every international standard format in the glass industry. The design team searched for a transparent solution and came up with the idea of an‘Origami’ glass box with glass panels glued together.In the folding lines only shear forces occur and therefor the glue can be used optimal. This geometry also solved the problem of the limited size of the panels and also made a more economic structural form.

Another challenging demand was that the boxes would float before the existing façade. This could be solved by sober thinking about the mechanical system and be aware of the sight lines of the connections.

The chosen mechanical scheme is very simple with a heavy console for the dead load at the bottom and light consoles for the small tension forces at the top of the boxes. From a structural point of view it is more logical to position the connections at the top of the side fins. But at that position it would be very visible and therefore we choose to replace the fixing points to the roof. This gave more complex requirements for the connection in the diagonal seam between the roof panel and the side fins.

To fulfill the wish of a 100% transparent glass box the seams had to be connected with transparent connections. ABT made an extensive research of possible type of glues which could carry the wind forces in the seams and also the long term load of the dead load of the front panel. Since both loads demands different properties of the glue this was a challenging research. The glue also had to be whether-, temperature-and UV-resistant. Thereby a transparent glue would satisfy the design of the architect best.

A transparent glue of Dow Corning seamed able for all the requirements. But later in the process the requirements for installation in the middle of a City Center became more clear and one of the consequences was that the boxes had to be assembled directly in final position. This made the application of the glue more complex. The intended glue had along drying time and this was not compatible with the requirements of installation for this project.

Another glue, Araldite 2028, was chosen because this glue is also transparent and has good properties for discoloration, weather-and UV-resistance. There was no information about the adhesion of this glue at glass surfaces. The glass contractor, Si-X, did tests about preparing the glass surface. This gave promising results, so shear test were done at the lab of KU Leuven to test the Araldite 2028.

Unfortunately the test pieces broke at the adhesive surface. This was not acceptable and again we had to research for a new glue. But since the deadline of the delivery was approaching and we had no time to test new types of glue we choose a complete different solution. We split the function of carrying short term wind loads and long term dead loads. For the seams with long term wind loads a structural silicone sealant was chosen (DC 993). For the long duration skewed notches were designed.

The inspiration for the connections with long term loads came from timber connections and earlier research on stacked columns (Heugtenvan, R. 2013). The connection is normal force dominant using a skew as introduction angle in the different element parts.

A 3D FE analysis (in DIANA) was used to study the stresses in the glass, the interaction of the interlayer and the consequences of lamination tolerances subjected to various load combinations. The glass was modelled using solid elements with a thickness of 9.7 mm for each pane. The Sentry interlayer was modelled using solid elements of 1.52 mm thickness. Considering a glass panel, one glass pane is raised 2 mm relative to the other pane to take into account lamination tolerance.

The support system consists of two araldite layers on either side of an aluminum block as shown in figure 7. The araldite layer is chosen to fill the differences due to lamination tolerances. This is based on the outcome of the research of stacked columns (Heugten van, R. 2013). The extreme edges of the glass panels are supported in X and Y direction and the bottom edge of one the panel is supported in Z direction as shown in figure 10.

Arnout Meijer designed a light art work for the boxes. This art work is interactive with the shopping public on the square. At the inside of the glass boxes LED strips will be mounted. Reflections of natural daylight and LED light on the film will give the boxes changing reflections. The team was searching for a material that could reflect and divide the light, could be combined with the structural glass and would be weather and UV-light resistant. The light art work will be finished in spring 2020.

The installation of the boxes had to be done at 5 meters high from a square in the city Centre of Eindhoven. The existing building was measured before ordering the glass and a test frame on site was made to be able to mount the consoles exactly.

Because of the complex assembly on site the contractor started with the installation of one box in December 2019. This went well and the other boxes are applied in January 2020. The light art work will be installed in May 2020. 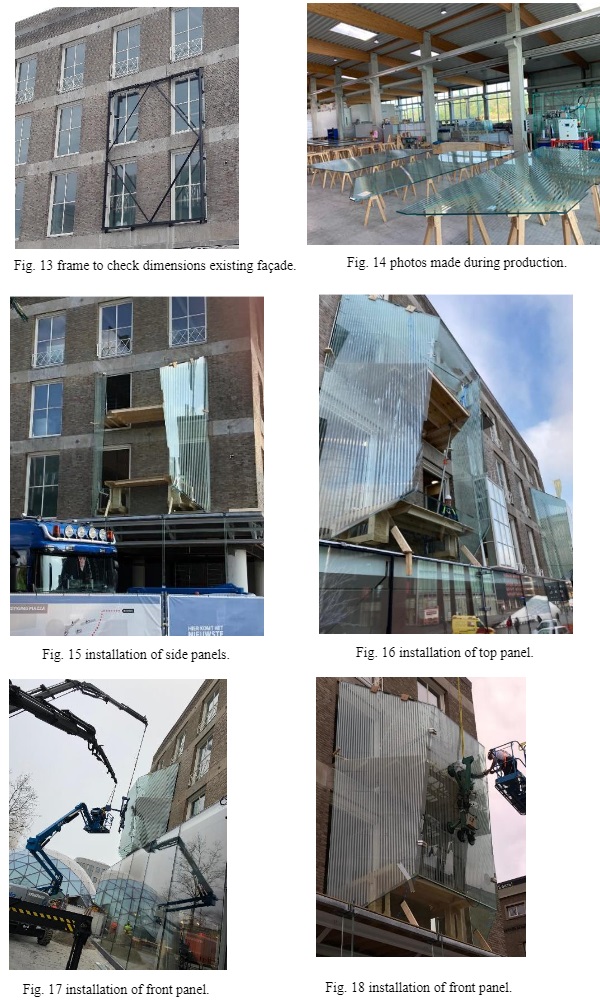 The authorities of Eindhoven were thinking allow in this innovation and they did allow the use of structural silicone sealant under the condition that an inspection protocol was drawn up and carried out. ABT set up a inspection protocol in inspections and measurements for monitoring are subscribed.

High-Temperature Behavior of Silicone Sealants
This paper reviews the high-temperature behavior of a selected range of silicones used for sealing and bonding in construction.
Case Studies on the Thermally Induced Stresses in Insulating Glass Units via Numerical Calculation
In the structural design of facade glazing, various types of loads such as dead weight, wind and climatic loads must be taken into account. In practice, however, there are many cases of damage that can be attributed to direct solar radiation.
Design of a Curved Duplex Façade for a 67 m High Residential Tower at the Belgian Coast
The main challenge in the design of the duplex façade was the high aesthetical performance that the façade had to meet.
Investigations on the Cold Bending Behaviour of a Double Glazing Unit with a Rigid Edge-Spacer Frame
In this study, the bending process of specially-fabricated double glazing units (‘panels’) is investigated with a focus on a local instability phenomenon.
Performance of Glass to Iron-based Shape Memory Alloy Adhesive Shear Joints with Different Geometry
As a contribution to assessing the feasibility of strengthening glass elements with adhesively bonded Fe-SMA strips, this paper focuses on the bond behavior of glass-to-Fe-SMA lap-shear joints based on numerical investigations.
High-Transparency Clear Glass Windows with Large PV Energy Outputs
In recent years, there has been a significant progress demonstrated in both the R&D and industrialisation of novel BIPV products, materials, and also the window-integrated PV (WIPV) solar window systems. 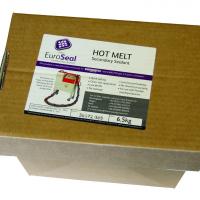 A custom glass piece in your home or business can create an air of elegance, or it can serve a practical purpose. Ideally, it will do both, and a skilled technician can fabricate the custom glass you are looking for. Glass Direct specializes in a range of different fixtures, and we partner with clients along every step of the way to create a piece that is as perfect as it is unique. Our commitment to quality is serious, and with our custom fabricators on the job, you can expect nothing less than professional results.

Greenbuild: What you need to know for 2022