Honoring the Past While Looking Towards the Future | W&W Glass, LLC 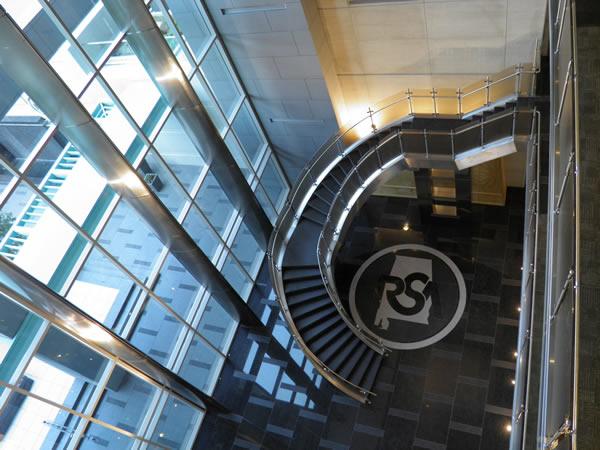 Using structural glass materials supplied by W&W Glass and fabricated in the United Kingdom by Pilkington, the project was glazed by Juba Aluminum Products with the Pilkington Planar™ system for the entryway curtain walls.

Trying to restore historical buildings while maintaining the character of the past is a common challenge designers and contractors often face today. Whether it is a skyscraper office tower or just a small, local storefront, the importance of preserving and honoring the past for future generations is a common theme these days.

Renovating the Judicial Office Building for the Retirement Systems of Alabama (RSA) in the center of Montgomery was an especially challenging but rewarding experience for all those involved.

The renovated high-rise addition was built around the former Alabama Judicial Building to preserve much of the historic structure, such as the ceremonial courtroom, as well as the overall architecture of the former building.

The existing historic courthouse became a hallowed piece of history in the Civil Rights Movement when Martin Luther King spoke on the front steps.

This magnificent project celebrates the historic State of Alabama Judicial Building and offers spectacular views of Montgomery’s downtown, the riverfront, and the state capitol building from its landscaped terraces and private executive balconies.

The Retirement System of Alabama (RSA) Judicial Office Building is located just west of the State Capitol. The site contains an existing structure and a new 531,000 square foot office building which is the latest edition to the family of RSA buildings present in downtown Montgomery, Alabama.

Led by Bailey and Harris Construction, renovation of the new RSA Judicial Office Building began in 2008 and was completed in July of 2011.

Named to celebrate the historic State of Alabama Judicial Building which has resided on the property since 1926, this $99 million project fully restored the existing building and encompassed it within a grand 50-foot tall structurally-glazed grand entrance topped by the twelve story skyscraper.

The restored portions of the project have been adapted for premium executive office space and a multi-purpose conference center which features the original Supreme Court chamber and lobby.

The RSA wanted to make a classic statement from the very beginning which meant shining a window into the world of historic Alabama. When it came time to execute the “big window” to the courthouse, nationally-acclaimed structural glass supplier W&W Glass was selected to make it happen.

The professionals at W&W Glass needed to make the new building the jewel of the existing Montgomery Courthouse complex. The architect 2WR Holmes Wilkins worked with W&W Glass to solidify the right design solution for this feature area.

Using structural glass materials supplied by W&W Glass and fabricated in the United Kingdom by Pilkington, the project was glazed by Juba Aluminum Products with the Pilkington Planar™system for the entryway curtain walls.

The product used is a “point supported” glazing system in which the face glass is supported by stainless steel fittings that bolt the facade glass back to suspended tempered monolithic glass fins to provide the necessary structural support instead of having metal framing behind each piece of glass like traditional curtain wall.

This allows an unobstructed view through the wall, looking both inside and out. Because of the vast opening size, the space frame piers visible through the Pilkington Planar wall were needed to support the building structure.

For more information on this project and all the projects completed and underway by the W&W Glass, go to wwglass.com and look under the portfolio section. 600450
www.wwglass.com
Honoring the Past While Looking Towards the Future | W&W Glass, LLC glassonweb.com

Prediction of moisture diffusion and failure in glass/steel adhesive joints