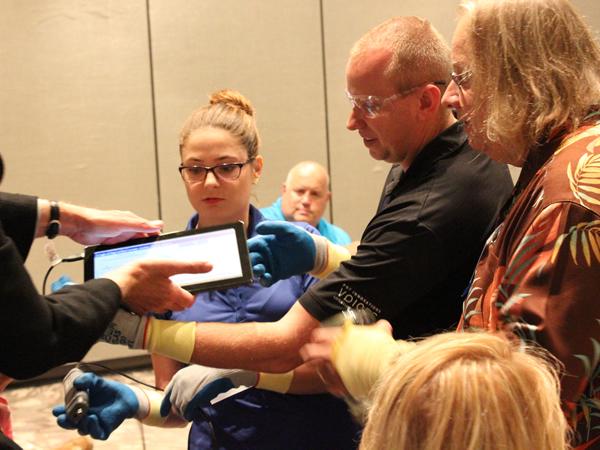 Glass was a large focus among the topics addressed during the American Architectural Manufacturers Association (AAMA) Fall Conference, which incorporated speakers from the Insulating Glass Manufacturers Alliance (IGMA).

During the summer, the memberships of AAMA and IGMA both voted to proceed with combining into one organization with a new name, Fenestration and Glazing Industry Alliance (FGIA), beginning January 1, 2020. The IGMA speakers took center stage to inform those at the conference about the effect hurricanes have on insulating glass unit performance, as well as how to wash and cut glass and how to conduct a frost point test.

“Hurricanes can have a significant impact on the long-term performance of insulating glass units, even those that are not broken by wind-borne debris,” said Lingnell.

Lingnell showed the makeup of a generic IG unit, which has a spacer, a primary seal and a secondary seal.

“A structural model of IG pressures shows atmospheric pressure, air space pressure and applied uniform lateral load,” said Lingnell. “The structural model must be in equilibrium under the applied loads as a main condition for the analysis.”

During a hurricane, along with high winds, water accumulation in glazing systems can be an issue, Lignell said. Glazing systems must be designed with water exits in mind.

"A lot of these conditions you see will affect insulating glass either directly or eventually over time, as water continues to stay in a zone and can't get out,” said Lingnell.

Lingnell concluded that, in addition to all the issues presented, changes in barometric pressure will cause stress on the edge seals and stresses in the glass, which should also be considered in designing IG units.

During several sessions at the conference, experts from the IGMA Insulating Glass Fabricators Hands-On Workshop showed off two of their stations: one demonstrating glass washing and cutting, and the other showing how to conduct a frost point test.

In one demonstration, Briese asked participants to clean one half of a glass unit with 91 isopropyl alcohol and the other half with glass cleaner. Then he had them apply a strip of clear tape to each half to compare which was easier to remove. The alcohol solution proved more effective at cleaning than the glass cleaner, and the strip of tape came off that side more easily.

“Even though it was visually clean, there was a barrier between the glass and the tape,” said Briese. “You need to make sure it’s actually clean. Oils, fingerprints and detergents bring more sodiums, which can lead to dirty glass or stains on glass.”

“The most important of these is that you want as little force or stress as possible,” he said.

Stress runs perpendicular to the edge of the cutting wheel. Sharp angles will drive more parallel, or along the glass edge.

“Cutting fluid is a very important part of scoring or cutting glass,” said Briese. “It helps keep the cutting wheel alive longer and from wearing out. Usually I recommend replacing your wheel about every shift. You’ll get really good edge quality.”

He recommended finding cutting fluid with the right amount of evaporating time for each individual’s purposes. “Don’t let the fluid sit too long, though,” he said. “And as soon as it’s scored, don’t leave it on the table.”

Lingnell and Randi Ernst (FDR Design) led a second workshop on conducting a frost point test on glass. Frost point, or lack of humidity in the glass cavity, is critical for the longevity of a sealed unit both installed and submitted for IGMA certification.

“The frost point test is used as part of ASTM 2188/2189/2190 certification accelerated aging tests to demonstrate that the hermetic seal around the parameter of the sealed unit is robust and that adequate desiccant has been placed in the cavity to draw down the relative humidity in the cavity to a frost point of at least minus 40 degrees Celsius,” said Ernst.

Those at the workshop were outfitted with appropriate safety gear, and cryogenic safety clothing was also shown and discussed. Participants were shown the “official” certification method to measure, with a D100 frost point instrument used by certification laboratories, including loading the device with dry ice and setting it to the proper measurement temperature.

They were also shown field screening methods developed by Lingnell, including utilizing small portable devices filled with solid chunks of dry ice in an alcohol bath, as well as “freeze spray” readily available from a number of suppliers.

Participants then used all these different devices to measure for visible condensation inside the cavity.

“These can be valuable screening devices to help determine the life left in an installed sealed unit and help building owners make informed decisions on when to replace units,” said Lignell.

A tablet computer was used to access small electronic sensors that were sealed within the units. These “iTiG” sensors can measure argon (or krypton), relative humidity, absolute pressure, temperature and UV light. From these measurements, one can calculate frost point, moisture by volume and thermal conductivity of the gas.

The workshop concluded with the use a device that shot a high voltage spark through the glass into the cavity, causing the gas to emit photons that were analyzed by a spectrometer for cavity gas content.

A full version of the IGMA IG Fabricator’s Workshop will be held November 12-14 in Plano, TX. Register now.

More information about AAMA and its activities can be found on the AAMA website.

ECO Scanner integration into a GED Intercept® Line
The ECO Scanner from Viprotron is a proven, cost effective system designed to detect glass related defects.
FGIA Releases New Document Setting Requirements for Synthetic Laminates for All Substrates
FGIA has released a new specification establishing minimum requirements for in-process quality control requirements for applicators of synthetic laminates to substrates used in windows, doors and skylights.
Special show „Green Deal“ on Fensterbau Frontale 2022
CO2 efficiency and protection against climate consequences with sustainable windows and building elements
The Big 5 wins 'Best Digital Event' at Middle East Event Awards for special 2020 edition
The event connected global construction players from 127 countries on a purpose-built platform powered by an AI-based matchmaking software.
Join Vitro for live Continuing Education opportunities throughout the month of April
Vitro is offering online Continuing Education (CE) opportunities for you throughout the month of April.
New deadline for VITRUM 2021 applications
The exhibitor registration deadline has been extended for another 60 days: you now have until May 19 to fill out and submit the application form.