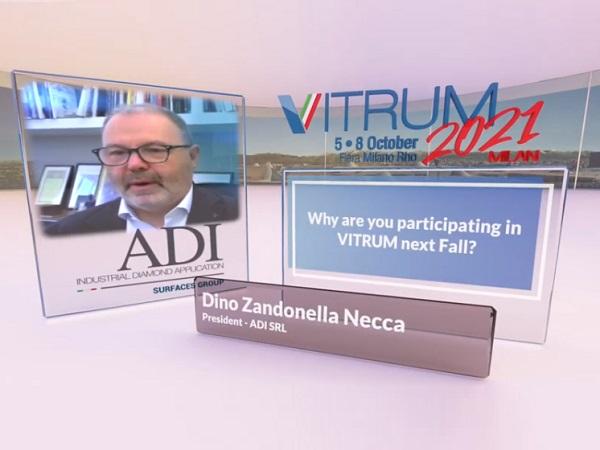 Italian companies share their thoughts and expectations about the show and relaunch of the glass sector.

In October, after considerable debate among the membership and the Governing Bodies, GIMAV went public with the position expressed by a majority of its member companies to not participate in GLASSTEC 2021.

The publication certainly achieved the desired results: getting everyone talking – domestic and international businesses, the trade press and trade associations as well as international trade show organizers. There were even some public reactions to the GIMAV decision – of surprise, approval and, in some cases, candid criticism.

With year-end upon us and thanks to some member suggestions, GIMAV felt the need to once again air the position upheld in October, this time through a new medium. They decided to film video interviews on the topic of VITRUM. The first to be invited were GIMAV Board members and representatives of the companies involved in the debate from the moment the news about the postponement of GLASSTEC to 2021 became known.

Three questions were asked during brief interviews. The respondents were free to articulate their answers based on their own sentiments. All of the responses were then combined into video recaps.

“First, we asked the companies to list the reasons why they decided to exhibit at VITRUM next Fall, especially in such uncertain times,” explains GIMAV Director, Fabrizio Cattaneo, who was present in person at all the recordings. “Second, we asked them to underscore the main reason they preferred to invest in VITRUM rather than in any other international trade show. Third, we asked the companies how they would describe their participation in VITRUM 2021… and received some very interesting ‘teasers’ that led us to believe the Show will be filled with technology and innovation.”

The companies involved in these first videos were trailblazers and, no doubt, many others could identify with the message and want their own voices to be heard. Which is why we then invited all of our members to participate.

“We are delighted; these videos demonstrate a robust bond with VITRUM, and a common vision that 2021 will be the relaunch edition,” continued Fabrizio Cattaneo. “Since it will take place in the second half of the year, there is widespread optimism that VITRUM will be able to occur, so to speak, in a normal way; that is, without any postponements or cancellations. And the companies seem to say VITRUM will open the door to jump-starting the sector – the trade show that manufacturers have chosen to showcase their machines and the stage upon which to launch their products.

Innovation, technology, a deeply felt decision and the desire to take their chances with VITRUM 2021, this is what is expected from the exhibition that spotlights products of excellence. Not surprisingly, most of them are Italian.”

This video project, warmly received by GIMAV members, is one that should be spread far and wide, publicized and shared using all the tools available to reach the broadest possible audience.

To reiterate, together and out loud, that “we’ll see you at VITRUM” in October 2021.

What is your reason for choosing VITRUM?

What will be the focus of your participation in VITRUM 2021? 600450
Vitrum
GIMAV Members explain the reasons they will be Exhibitors at VITRUM 2021 glassonweb.com

Glass for Europe’s statement on the revision of the Industrial Emissions Directive (IED)
The flat glass industry in the middle of a major industrial transformation process to reduce all emissions and this requires significant investments.
NGA Staff Visit Prairie View A&M University
Present career opportunities to students of the largest HBCU in Texas
LiteSentry-SoftSolution at Glasstech Mexico
LiteSentry-SoftSolution are excited to be showcasing at Glasstech Mexico November 30th-December 2nd!
Şişecam Proudly Celebrates its 87th Anniversary
As one of the strongest global players in the glass and chemicals industries, with its production operations in 14 countries on 4 continents Şişecam proudly celebrates its 87th anniversary.
A National Fenestration Awards event to remember
The National Fenestration Awards winners event was held on Saturday 5th November, and yes, it went off with a bang!
Why The Window Company (Contracts) are backing #FITShow23
David Thornton, Chair at the award-winning commercial installer The Window Company (Contracts) has attended every FIT Show since the launch in 2013.