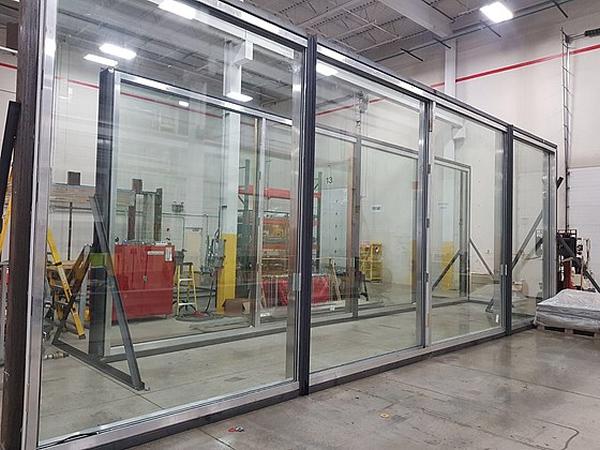 Hurricanes are tropical storms with a wind force of at least 12 Beaufort, 64 knots or 118 km/h. They occur most frequently in the Pacific off the East Asian coast and around Central and North America.

Because of their enormously high wind speeds - Katrina, for example, has swept over Florida at around 300 km/h - their monster waves and heavy precipitation, hurricanes have enormous destructive power.

In the USA alone, damage running into billions is caused every year. This makes it all the more important to rely on high-quality building fabric and hurricane-proof windows in the affected regions.

In addition, the windows and frames are intensively irrigated and bombarded with wooden masts as they fly through the air during hurricanes. Hurricane tests in the USA are among the most demanding tests a window system can undergo in terms of statics and tightness.

The air-lux window system has proven once again during the tests in the USA that it is the most robust and tightest sliding window system on the market! On the one hand air-lux has tested the largest sliding elements - on the other hand it passed the "Water Resistance Test" with 20psf the highest tightness value for a sliding window!

Since the tightness of a sliding window depends essentially on its size, it is all the more important that both records were achieved with the same elements. So not a marketing gag but pure performance under the most difficult conditions! The high driving rain tightness of 20psf should be of particular interest for high-rise construction.

Register now for the Trosifol® web seminar „Designing hurricane resistant glazing systems“
The presentation will review codes and standards as well as key factors when designing hurricane glazing systems.
FGIA Updates Test Method for Vertical Fenestration Installation Procedures
The Fenestration and Glazing Industry Alliance (FGIA) has updated a test method evaluating the performance and durability of the integration of a fenestration product with a building envelope.
New Dates Announced for the 2021 International Window Film Conference and Tint-Off™
The International Window Film Conference and Tint-Off™ has been rescheduled. The new dates are June 7-9, 2021 at the Orange County Convention Center in Orlando. WFCT will be hosting WFCT Preview Day on January 14, 2021, which will be virtual.
The Vortex student residence - a building with bold architecture | Glas Trösch
Glas Trösch Group provided triple insulating glass with laminated safety glass for both the inner and outer circles.
FRANZ GYSI AG uses VirtualDigitizing directly at the cutting table | Softsolution
Without a digitizing solution, customer supplied templates can often be a difficult task, as the Swiss company FRANZ GYSI AG can confirm.
SWISSRAILING FLAT - simple and puristic
The full glass balustrade of the SWISSRAILING FLAT is a captivating sight with its flush-mounted aesthetic and invisible substructure.