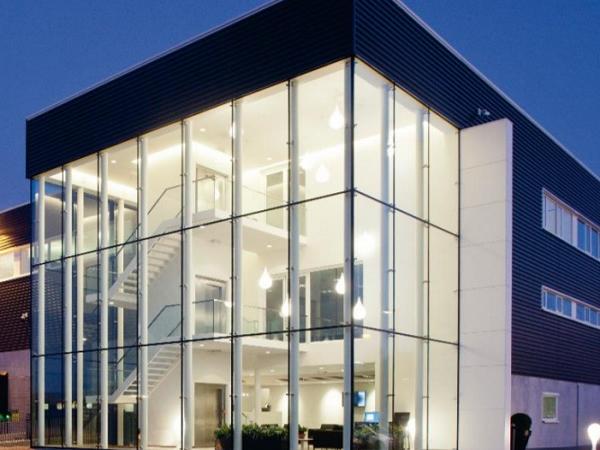 During a recent project to understand the ability to use Transparent Structural Silicone Adhesive (TSSA) via linear bonding for cable wall fittings, a unique aspect of the material indicates a potential novel method for cold bending glass.

Used in long sections and small widths, the TSSA was able to effectively bend and hold shape after processing in an autoclave. The original purpose of the study was to evaluate at what length would the TSSA connection would fail in shear due to a mismatch in coefficient of thermal expansion for the glass and metal. However, the lengths studied indicated a potential to control the amount of bending due to length. The technique presents a potential art to create curved facades in lieu of the use of conventional structural silicone sealants under constant loads. As the TSSA is now the material under constant load, the curved glass could be installed in different façade assemblies via fittings.

Transparent Structural Silicone Adhesive (TSSA) is a unique crystal-clear film adhesive that is used to bond point supports of metal, typically stainless steel to glass. The TSSA is cured in an autoclave where glass is laminated usually with Polyvinyl butyral (PVB) or ionomer interlayers. Once the TSSA is cured onto the glass inside the autoclave, the fabrication and erection of the panels involves the simple attachment of engineered hardware on a project site. The TSSA application is a higher performance option than drilled mechanical attachments in glass which include the following advantages:

1. Use of Tempered glass is not mandatory, rendering a smoother façade appearance
2. TSSA attachment points can be designed to be applied to the edge of glass compared to drilled holes that should be twice the glass thickness from the edge. [1]
3. TSSA attachments do not breach the cavity of an IG unit therefore increasing thermal efficiency and durability with regards to gas leakage
4. Attachment fittings do not have to be circular and can be rectangular or custom designs.
5. TSSA has design stress of an order of magnitude higher than conventional wet applied structural silicone. [2]
6. Transparency is maximized because mechanical fitting dimensions are minimized by being able to be bonded to the edge of the glazing.

TSSA performance was introduced to the commercial glazing industry through publications and data presentations. [3-11]. The authors encourage the readers to be familiar with these publications to understand the material science and application engineering that has been established to validate design and performance of TSSA.

The authors were challenged to assist in a design guideline for linear metal plates bonded to glass that would be used to support a cable net wall, an architectural vision of maximized transparency. The challenge was to use typical stainless steel plates with a different coefficient of thermal expansion (CTE) compared to glass. Generally, metals with a better matched CTE to glass are used such as titanium to control shear differential.

Commercial applications of this technology presented by Bruno, [9] have lengths of ~350mm to support the width of a glass stair tread. Vladimir Marinov of Design Engineers, London UK, used TSSA in lengths of 400mm steel pieces in triplicate on a piece of glass to support a car at the Glasstec event in 2018 in Dusseldorf. [12] This was labeled as the Gravity Project.

TSSA has a shear movement limitation because of its 1mm supplied thickness. Curved surfaces on flat fittings have successfully used 2mm of thickness to avoid higher modeled shear stresses under loading. [5]. The additional thickness was done by applying 2 layers of TSSA in the factory before the autoclave cycle. Demonstrations of tensile strength on 3 layers of TSSA was done by Hagl. [10]

The idea that when induced shear is imminent due to thermal or mechanical loads, a variation in thickness can reduce stress. The is the same concept of glue thickness in the design of conventional structural silicone joints. The TSSA was demonstrated to be viable at thicknesses greater than 1mm.

The glass sheet and metal pieces were placed as noted in the sketch in Figure 1. The glass plate was placed in vacuum laminator to reside under vacuum and the heat was applied to allow the TSSA a 30 minute soak time at 130 °C.

The purpose of the experiments was to observe the TSSA distress from the aluminum and steel attachments by viewing the TSSA through the glass. The distress by TSSA shown as whitening is an indication that the adhesive is near a failure point for loading[1]. It was expected to see a cohesive failure of the TSSA at the ends of the long spans of aluminum with 1mm thickness.

To our surprise, no failures or distress whitening were observed after the sample was removed from the laminator, however, the glass was significantly deformed. This failed experiment resulted in the idea that TSSA could be used to permanently bend glass that could then be placed into applications where a cold bent piece of glass would have aesthetic desire.

Additional experiments were fabricated to validate the potential application of metal strips onto glass with TSSA to control the amount of warpage. The authors had a glass size limitation of 914 x 1524 mm due to the size of the vacuum laminator used to cure the TSSA.

Testing commenced using parallel strips of metal on the long side of the glass as shown in figure 2.

Steel strips were compared to aluminum strips in this experiment. All bonding was done with 1mm of TSSA thickness since no visual distress of the TSSA was apparent in the first failed experiment noted above.

The perpendicular bonding study had the metal strips much closer to each other at the corner. This was to try and induce the maximum double bend in the corner.

After the specimens were fabricated and cured, the warpage of the glass was as expected, meaning the parallel bonding provided warpage in one direction and the aluminum strips showed more warping compared to the steel strips.

The perpendicular specimens had a double warp and again the measured warpage was greater for the aluminum compared to the steel.

The amount of warpage was measured by placing a tight string from one corner to the other and measuring the deflection at the maximum. Figure 4 shows an example of the measurement technique. Table 1 reports the data of each panel.

Modeling of the Phenomena

To understand the impact of different variables of the potential art, a finite element model was developed for a parallel bonding and a corner edge method. The intent of a parallel bonding method was to curve the glass only along one length of the lite where the corner edge was used to develop an elliptic paraboloid with a scallop shape through bending along perpendicular axis. (insert pics).

Important material properties for the model were modulus and Poisson Ratio for glass, aluminum and steel and hyperelastic models for the TSSA. Coefficient of Thermal Expansion (CTE) was used for all materials. Data for each material is shown in table 1 and 2.

The model was then used to predict the expected curvature of each bonding method as the assembly is cooled from 130 °C to 23 °C due to CTE mismatch of the materials.

Results of the Design of Experiments

For the corner edge bonding, the design equation is written as follows:

For the parallel boding, the variables of metal width and TSSA thickness had the most impact on the deflection. The design equation is written as follows:

Where,
Wm = Width of Metal in mm
ttssa = Thickness of TSSA in mm

The expressions can be used in a solver where variables can be iterated or held static to calculate for desired deflections.

Using TSSA to cold bend glass before final installation has unique applications for both internal and external use. This idea can be further explored using TSSA attachment points at specific locations on the glass and using cables and turnbuckles to custom or dynamically warp glass. The amount of warping can be dramatic above and beyond the adhered metal strip approach, however the cables would be a visual chord behind the arc of the glazing.

Due to differences in coefficients of thermal expansion, metal bonded to the surface of a glass plate can create a cold bent plate as materials cool from the autoclave process to room temperature. Increasing the width of the metal connection will increase the amount of deflection in the glass plate. Increasing the thickness of TSSA will decrease the overall deflection. A parallel bonding technique creates a bend along the length of the lite while a corner edge bonding technique creates a paraboloid shape. These shapes can be incorporated into a curved or bubbled appearance as shown in Figure 7.

This creates additional design freedom for the architectural community by incorporating cold bent glass in glass wall design. Further design options are possible by using turnbuckles and cables between traditional TSSA attachment points on the glazing. Proper engineering must be done to accommodate the stresses in the glass and adhesive so that long term durability can be maintained that enables this design freedom. The effects of high strain-rate and in-plane restraint on quasi-statically loaded laminated glass
A theoretical study with applications to blast enhancement
Small Hard Body Impact on Annealed, Heat Strengthened and Fully Tempered Laminated Glass
A study was made of the impact resistance of annealed, heat-strengthened, and fully tempered laminated glass using test panels.
Glass-paper-laminates: examination of manufacturing methods, properties and discussion of potentials
This paper examines various ways of combining paper and glass as a laminate and the effects on transparency.
Carbon Neutral Silicones in Façades – a window of opportunity
Dow has a strong commitment to sustainability and recently introduced the first externally PAS2060-verified carbon neutral silicones for façades.
Reduced order modeling of soft-body impact on glass panels
In the paper, strategies for reduced order modeling of glass panels subjected to soft-body impact are developed by means of dynamic substructuring.
Post-tensioning of glass beams: Analytical determination of the allowable pre-load
In this paper, failure mechanisms are identified for a post-tensioned glass beam system with a flat stainless steel tendon adhesively bonded at the bottom glass edge.