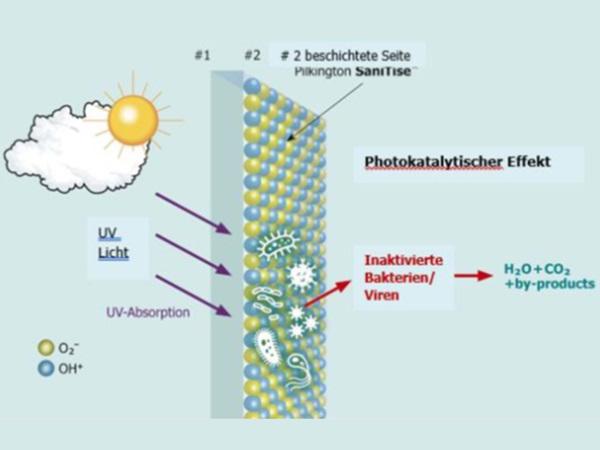 Glass surfaces can be pre-treated so that they do not offer bacteria and viruses a chance to survive and do not aggregate layers of dirt.

The last industry working group of the Glass Technology Forum dealt exclusively with glass surfaces and their specific properties. These are permanently under the influence of their environment and not only through weather and air pollution. Wherever people come into contact with glass surfaces, they leave traces and thus also viruses and bacteria. A special coating can prevent them from surviving on the surface.

Glasses like these from the NSG Group are used in the medical sector or are part of interior design. Furniture surfaces lend themselves to this, especially in places with much public traffic. The glass type SaniTise™ from Pilkington contains a coating based on titanium dioxide, TiO2. This is applied in a CVD process at 600 °C during float glass production.

The photocatalytic effect is triggered by UV light. Sunlight destroys 90 percent of the viruses on the surface after about 15 minutes. An "accumulator effect" means that about 80 percent of the viruses are still devastated after 60 minutes. Additional UV light sources are necessary indoors. The layer is active for the glass´s life and does not restrict further processing steps in the manufacturing process. Since it is very thin, the glass can be recycled.

With laminated glass, the film used must be UV-permeable. If the active surface gets a print afterward, the effect is reduced because the printed area can no longer reduce the virus load. Special cleaning agents are not necessary.

Reactions of glass surfaces to the environment

In general, glasses react to external influences. 95 percent of the glasses that are used are silicate glasses. Due to the hybridization state, the SiO2 ensures that a three-dimensionally linked silicate network with four bonding arms is created. This is hard to dissolve. Nevertheless, the surface reacts impressively - if new surfaces form, loose and thus reactive bonds are present. This is also reflected in the strength: the smallest defective spots in the surface cause brittle fractures when tensile stress occurs. Consequently, it is helpful to introduce compressive stresses into the surface. This is done, for example, via chemical or thermal pre-stressing.

The glass surfaces change over time. In particular, the reaction with moisture damages the surface ("deficient water attack"). A gel layer forms in which, on the one hand, crystallization takes place, but which, on the other hand, can act as a protective layer depending on time. Why these gel layer bumps form has not yet been explained. The TU Ilmenau is also researching this. Sodium hydrogen carbonates are often found there. The weathered and dried gel layer can flake off over a large area and reveal a new glass surface. In the daily environment, we encounter glass surface reactions, especially in the dishwasher, but external environmental conditions such as dust or sand also show great effects.

The gel layer that develops during the aging and corrosion process requires glass to be pretreated before printing or coating. This is a core competency of SURA Instruments GmbH.

One possibility is to silicatise the surface using pyrosil technology. This involves burning a gas mixture with a precursor containing silicon. A silicate network with a high number of OH groups is formed. The result is a hydrophilic layer on which the water contact angle is reduced to values between 0 and 5 degrees. This is important for the application of lacquers or adhesives, but it also affects the reflectance of the surface.

Digital printing, especially with organic, fast-curing inks, is becoming increasingly important. This process enables the smallest batch sizes and the highest degree of individualization. Unfortunately, organic inks are very sensitive and do not contain an adhesion promoter. A mechanical bond by clinging to the surface is usually not present in glasses. Physical bonds are always present (dipole forces, hydrogen bonding) but are not sufficient to ensure long-term adhesion. Chemical bonds, however, (covalent bonds) can arise when impurities and absorption layers are removed.

The best basis for coatings is the juvenile glass surface. Older glass must be pre-treated. Flaming is one possibility; it can clean the surface and, depending on the process, remove the cold end coating at the same time. The adhesion strength increases significantly with adhesion promoters, and the fracture pattern no longer shows adhesion failure.

Better not to touch - mechanical stress on displays

Touch, swipe, and zoom not only generate abrasion but also leave skin grease, cosmetics, or disinfectants on displays. The Institute for Surface and Product Analysis (ISPA) investigates and tests the effects. Humans cannot see changes on the surface that are smaller than 40 µm.  The fingertip, however, can feel changes up to 1 µm in size. The speed of the movement is decisive for the magnitude of the damage. Mechanical stress tests often do not reflect reality because they are performed too slowly.

An established standard test is the ABREX® Abrasion Test. It simulates the contact of a viscoelastic, rough, and inhomogeneous finger surface and can take into account various solids and liquids as well as temperature ranges. The contact angle of 45 degrees is particularly important. Depending on the requirements in the end application, different load levels and speeds are used. These and other test methods have been tested and further developed by the German Flat Panel Display Forum. An evaluation of the test result is carried out by measuring the contact angle.

Erin Mills Town Centre – Globe Structure
The structural glass for this globe structure is created with laminated double curved glass panels patch supported by a steel structure.
Design & Engineering of the iconic spherical shell of the Academy Museum of Motion Pictures, LA
Renzo Piano Building Workshop designed a 290,000 sf museum celebrating the artistry and technology of film, becoming the world’s first museum and event space devoted to the Motion Picture.
Laser – a Tool for Glass Processing
The laserbird is a universal tool, making it the perfect choice for a broad portfolio of customers, applications and glass products.
Functionality and Performance Tests for Coatings on Glass for Solar Application
Solar glass is used as glazing for solar devices like photovoltaic modules and solarthermal collectors. In many dry regions dust accumulation lead to extreme efficiency losses due to soiling, up to -80% in 6 month.
Silicone Opacifiers for Spandrel Glass Applications: Risk Mitigation in Thermal Stresses
Curtain wall design commonly uses insulating glass units for spandrel glazing to provide better visual harmony between vision and spandrel areas.
Recent Trends in Architectural Design of Light-permeable Facades
Contemporary architectural transparency (understood as the optical property of the material) is constantly being redefined and, over the last decade, new design trends have developed related to transparent façades in architecture. 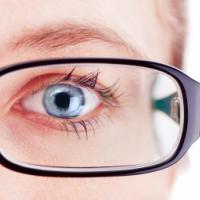 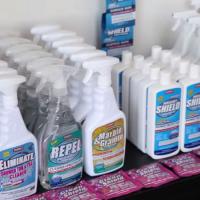 A ‘Prince’ of glass in Milán | Tvitec